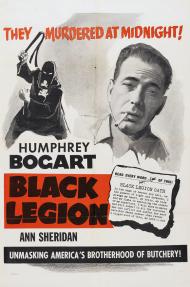 Black Legion was another Warner Brothers' social message picture. It was based on the real life murder of a WPA worker in Michigan in 1936. The titular organization was a Northern offshoot of the Ku Klu Klan that boasted 20-30 thousand members at its peak in the 1930s. It was based in Detroit, but had chapters in Ohio as well. Like the KKK, the Black Legion was a white supremacist group that used intimidation and physical violence against those they perceived as being inferior due to race, religion, or national origin.

A young, relatively unknown Humphrey Bogart stars as Frank Taylor, a married father who gets passed over for a promotion at the auto plant where he works. A Polish immigrant is given the job of foreman instead. Frank is soon persuaded by an acquaintance to join a clandestine organization that will give him power over all these foreigners that are taking jobs from decent, true Americans. After taking their evil oath at gunpoint (see photo), he quickly finds himself in over his head.

Bogart is great in the lead. As written, Frank is a bit of an enigma. He is at first shown to be a decent family man, but once he joins the Black Legion he throws himself wholeheartedly into the cause, soon realizing he has a taste for violence and the adrenaline rush of power that comes with it. Bogie really sinks his teeth into the role.

Frank Taylor is a great part as it requires the actor to project an average likable quality. He's a man who discovers the ugly side to his personality at the same time the audience does. He commits atrocious acts but thanks to Bogie's skills as an actor he remains sympathetic right up till the end. The moral of the story is that despite being easily led down the wrong path, Frank Taylor is basically a decent man. The movie posits he could be any one of us.

At first Frank has few qualms about partaking in the group's hate-filled raids against innocent Americans. That is until it starts causing problems in his home life. All of which leads to cold-blooded murder followed by an exciting -if slightly over-cooked- climax in a courtroom where Samuel S. Hinds (Pop Bailey from It's a Wonderful Life) gives a well intentioned -if rather heavy-handed- speech about patriotism and what it really means to be an American.

The supporting cast is also good. Erin O'Brien-Moore gives a heartfelt performance as Frank's supportive and loving wife. She is no pushover and when she learns of her husband's secret late night activities she reacts realistically and forcefully. Dick Foran plays the morally upright next door neighbor and Ann Sheridan has a small role as his fiancee.

Black Legion was initially banned in many European countries. Its subject matter deemed unsuitable for public consumption. Archie Mayo directs with confidence. He keeps the story simple and the plot moving along. Black Legion is a great showcase for one of Hollywood's most iconic stars in their formative years and it retains a powerful -although far from subtle- message. 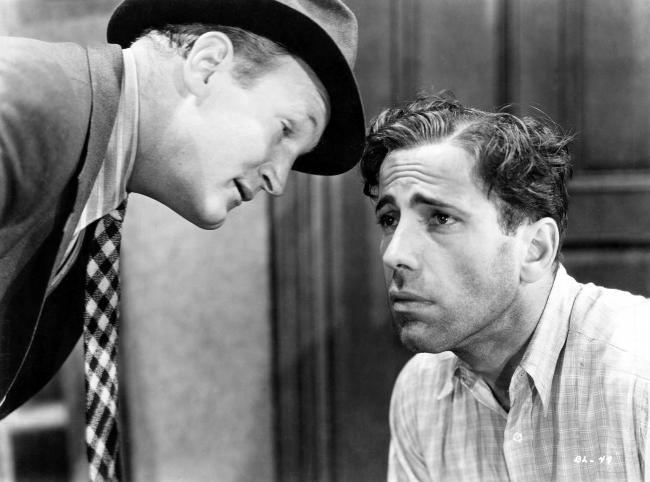 A message that is still relevant today, even if it is now looked at from slightly different angles than shown here. Some of the things the man on the radio rants about immigrants are still being spouted by some today. Eighty years later, we are still debating issues on immigration. The citizenship of the Polish man is never questioned. Frank dislikes him because it gives him an excuse to not accept his own shortcomings. How would have Frank reacted differently if the promotion was given to one of his "American" co-workers? He would not have been any happier but he would also not be able to use the "immigrants are taking our jobs" stance, leaving Frank to come up with some other lie to make himself feel better.

Black Legion is a melodramatic moral tale that offers, as Patrick mentioned, a look at a young Humphrey Bogart. His Frank Taylor starts the film likable enough but then quickly becomes the stereotypical bigot. The very first scene shows us the reason why the other man was given the promotion but Frank cannot see it. Out of jealousy and disappointment, he easily accepts the rhetoric that immigrants are coming to The United States and taking American's jobs.

I did not see Frank as a likable person as soon as he went to the first meeting. I get that we all sometimes come up with reasons why something good did not come our way. It comforts our ego. We would understand if Frank went home feeling down and remarked to his wife that some smart ass Polack got the job over him. It is called venting and we all do it, with or without racial slurs. I would still like him if that was all he did but that would have made for a very short film. Frank goes to meetings, takes an oath to a dangerous organization and commits crimes. These acts cause him to lose everything. Sure, we can say he did not know how deep he was getting in until it was too late but this man is so insecure that he needs to hide behind a group of mask wearing men to make him feel like a bigger man.

I love Humphrey Bogart and he has amazing screen presence but Frank is far to weak of a man to like. Real men accept responsibility for their actions and their failures. Even though Frank breaks down at the end, it never makes up for the damage he created.

Black Legion is not much on story but as a social study it does demonstrate that the issue of immigration has long been a political hot topic.