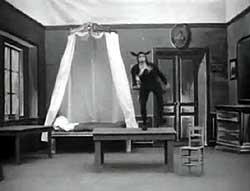 The Black Imp is an early example of creative and seamless special effects. The magic of cinema allowed the illusion that objects could be made to disappear and reappear at random. Georges Méliès made good use of this stop motion technique in his iconic masterpiece, A Trip to the Moon. Released in 1902, that is considered to be the first true film, complete with costumes, sets and a narrative. The Black Imp is much less ambitious in scope but still entertaining.

The titular character prances and hops amusingly around a bedroom of an inn. He is dressed like a devil, all in black, with a long white beard. He suddenly disappears. Next a man gets shown to the room by several innkeepers and a maid. As soon as the man is alone, strange things begin to happen. His bureau disappears and reappears on top of a table, then on top of two tables.

Next the chair begins to multiply all around the room. In the best special effect the man tries throwing the chair but each time he does it is immediately replaced by another chair.

Finally the little devil returns and the man begins chasing him around the room with a broom stick. The imp makes the bed catch on fire and then disappears again. The innkeepers return, find the room a mess and the bed burnt, and drag the now raving man out. The mischievous imp returns, pleased with himself, and lies down on what is left of the bed to sleep contentedly. 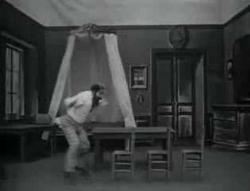 Georges Melies in The Black Imp.

Again Georges Méliès proves that he was the master of early special effects.  He also shows that when it comes to storytelling, he really didn't have much of a clue.

Clearly the whole point of this short is to show off the use of quick cuts.  Using just this simple technique Méliès manages to create some impressive (especially for the time) effects.  Like you Patrick, I found the multiplying chairs to be the film's best effect.

Méliès, who stars in the short, wasn't a very good actor.  He mimes and overacts horribly.  Watch his exaggerated, "I'm going to sleep" and "Here I go to put my coat away" movements and you'll see what I mean.  He hadn't learned that you don't need to telegraph your intentions so broadly for audiences to understand what you were doing.

In the silliest bit of the short, when the man goes to put his coat away, the dresser starts moving around the room.  What's silly about that is that the man's first reaction isn't to run screaming out of the room, but to follow the dresser around trying to put the jacket away anway.

With such a short running time, at least this film is fast paced and mildly amusing, but Méliès could have made better films if he worked with a writer and a real actor instead of trying to do those jobs himself. 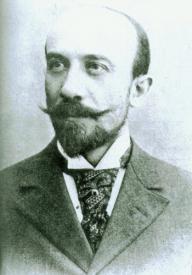 My favorite special effect in The Black Imp is when the dresser was stacked on the tables.  He climbs up on them, still determined to put his clothes away.  They dresser and tables disappear and he falls to the ground.  How did Melies get into the air to do that shot?

The Black Imp shows a devil like character haunting a hotel room until the occupant gets carried out hysterically by the owners.  I think the estate of George Melies should demand some money from Steven King and the film makers of 1408 (2007).   In that film a hotel guest is haunted by devilish forces until he goes crazy.

Melies was not strong on plots or characterization, but he had some ideas that are still being mimicked more than one hundred years later.