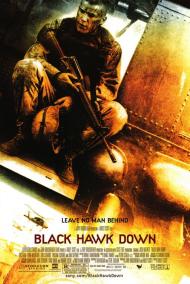 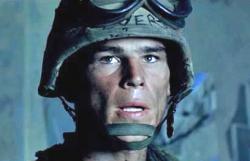 Josh Hartnett in Black Hawk Down.

I'll be the first to admit that war movies are not really my thing, so please keep that in mind while reading this review. Black Hawk Down tells the story of a mission which goes terribly wrong during the United States intervention in the tribal wars going on in Somalia back in 1993.

Like most war movies it has the usual cast of characters; the handsome hero, the gung-ho kid, the scarred veteran, plus an assortment of others that are all too familiar. The problem here is that none of the characters gets enough screen time to really become someone you can care about. It is really too large of a cast and after awhile it becomes difficult to distinguish them apart, especially amidst all the smoke and gunfire and quick edit shots.

Still this movie offers an interesting view into the technological advances in modern warfare. Overall the action is quite good and director Ridley Scott should be commended for not whitewashing the facts here. War, after all, is hell and believe me this one ain't pretty. In fact some of the gore seems a bit gratuitous but then again that is one reason people go to war movies anyway.

In the war movie pantheon this one lies dead center between All Quiet On the Western Front and Pearl Harbor. 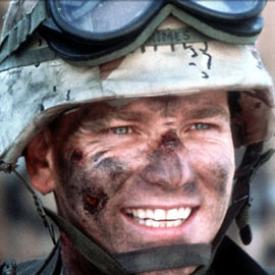 Ewan McGregor in Black Hawk Down.

I do not care for horror movies. The reason being is that they really do not scare. Freddy Kruger is not real and thus the fear factor is minimal. Sure there may be the occasional startle scene where some one jumps out, but otherwise these types of movies are harmless. Movies that truly scare me are war movies. They are usually based on true events. People actually found themselves getting shot at and being captured by an enemy that may or may not torture and or kill them. True events are scary because it's possible that something similar could happen to you or someone you know. Such is the case of Black Hawk Down.

On October 3rd, 1993 just over a hundred American Soldiers enter Mogadishu, Somalia to capture some Lt's of General Aidid's. The operation was to take an hour, but after two Black Hawk helicopters get shot down the engagement takes nearly 24 hours. Surrounded by thousands of hostile forces, a group of Army Rangers and Delta Force soldiers make like the Alamo through the night and into the next day. They hid in destroyed buildings and tried to save their wounded.

The movie covers the campaign from every angle. The officers observing from HQ, the Helipilots, the soldiers amid the fire fight as well as the Humvee drivers all get screen time. It was the only way to properly tell this story. Patrick complained that not enough screen time was given to any particular character. I believe that, that was intentional as this is an ensemble cast about events, not one particular persons experience.

Patrick is correct when he wrote about the gore. This movie, as is the current war trend, does not hold back on the use of blood. I am so glad for it too. John Wayne's war movies glorified battle by not showing the carnage. Contemporary war movies try much harder to show it like it is. Thus the fear factor I have in watching these movies. Like the first 30 minutes of Saving Private Ryan, I had a hard time watching some of this movie. I get so empathetic towards the character that I fear for them.

Due to my emotional reaction to this film it is apparent to me that Ridley Scott is one hell of a great Director. It is always a testament to a movie that can cause an emotional reaction from its audience. This movie sure did it for me. I grimaced during some painful scenes and encouraged them to run faster when the soldiers were on the move. I lost myself in this movie and found myself in a scary place.

Sizemore is the stand out in this movie. He is the fearless Lt who walks upright in a fire fight when everyone else is behind cover. In one scene he is on the passenger side of a Humvee when the driver gets shot. He grabs the steering wheel and yells "Just keep your foot on the gas." moments before getting shot himself.

This is a wonderful political war movie. It demonstrates what can happen when we send our troops into foreign lands to intervene in world affairs. Whether you agree or disagree with that policy, watch this movie before making up your mind.