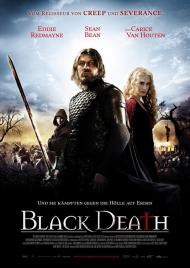 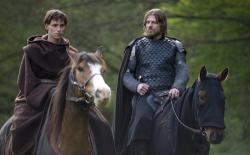 The Black Death in the 14th century is estimated to have killed 30% to 60% of the population of Europe.  An event as horrific as that is almost unimaginable, but at least today, if the like were to happen, we would be able to understand what was causing it to some degree.  Then, as demonstrated in this movie, the catastrophe was most often blamed on some kind of supernatural cause, either as a punishment from god or the devil.

Sean Bean is the biggest name in the film, but Eddie Redmayne is the main character as Osmund, a young monk in 1348.  Although a novice monk, he has a lover.  When the black death strikes the monastery, he urges Avrill, his lover to flee for her life to the woods.  She in turn, urges him to meet her there in a week's time.  He prays to god for guidance and when a group of mercenaries turn up at the monastery looking for a guide to take them very near the spot where Avrill is waiting, Osmund takes that as his sign and volunteers to be the guide.

Ulric (Bean) is the leader of the mercenaries.  He's an emissary of the Bishop and they are going to investigate a village in a swamp where reportedly a necromancer has used black magic to keep the plague out of the village.  It's the mercenaries' mission to discover if this is true and to kill the necromancer if it is.

The story is a dark one with the dark ages being shown in all their blood, grime and gore.  This is no romanticized vision of knights in armor.  While some of the mercenaries might qualify as knights, they're not exactly chivalric or courtly.  Likewise the village they are traveling to, which at first seems idyllic, quickly turns out to be not everything it seems.

Along with the action and the dark mystery the movie also pits belief versus atheism.  The mercenaries are all god fearing Catholics convinced that they are right because they believe in god, while the pagan villagers are just as convinced they are right because they don't believe in god.  Perhaps despite our modern advancements in science, humanity hasn't changed all that much after all.

The movie also comes with a bit of a twist ending that gives it a bit of an extra kick.  I won't reveal it here, but I was kicking myself for not seeing it coming.

Perhaps the only thing wrong with the story is that none of the characters are particularly sympathetic.  Osmund starts out that way, but the mercenaries and the villagers are both so willing to shed blood in the name of their beliefs that it's difficult to empathize with either of them.

This catalysmic event has never been repeated to such a terrible degree.  There are many stories that could be told about the period.  This might not be the definitive classic on the subject, but it is interesting and entertaining. 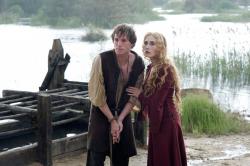 Scott mentioned some statistics about the devastation caused by the plague that swept Europe during the Middle Ages. One possible positive side effect from it is that 10% of today's Europeans are resistant to HIV infection. It is believed by some to exist because the plague created a mutated gene. The mutation has been found all over the world but nowhere as much as in Europeans.

Anyway, Black Death is a fascinating mystery, on par with a good episode of "Doctor Who", and I mean that as a compliment. They arrive in a strange location, meet some strange people and go about determining what is wrong. Osmund is the companion who wanders away from the Doctor/Knights to discover things that he should immediately tell him/them about but of course does not.

I enjoyed trying to figure out where everything was going. Who is up to what and who could be trusted kept me interested and there is just enough action to keep things lively. The one problem is, as Scott mentioned, Osmund is a sympathetic character but the resolution to the story does not leave him the actual hero. In fact, the ending is so dark that it erases any likability he may have generated. It was a punch to my gut when Osmund begs Langiva, “Bring her back, I beg you bring her back!” and she responds, “No, I can't. Pray to your god, see what he can do.” You have to see the preceding scene to get the full impact of that conversation.

Christianity starts out as the good guys in this film but ultimately they are depicted as being just as evil as anyone else. Ulric states, “Yes, this village is without the pestilence... but it is also without God. For this, they will suffer.” God forbid some heathens are in good health without God saying so. In fact, Christianity comes across far worse than those we originally perceive as being in the wrong. At least with "Doctor Who", we know he is going to leave whatever time and planet he visits a better place.