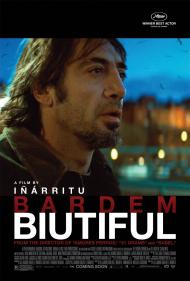 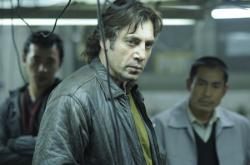 Biutiful has been generating a lot of buzz for its lead, Javier Bardem. Julia Roberts and Sean Penn made big news when they both endorsed his performance for the Best Actor Oscar when he was over looked for many of the earlier guild and critic's awards. Having seen the film now, I do have to agree that he gives a raw and real performance. It's only a shame that the movie itself isn't nearly as good as its lead.

The plot of Biutiful is all over the place. At its heart it tells the story of Uxbal (Bardem), a man dying of Prostate cancer. He's the father of two young children, a girl and a boy. His estranged ex-wife is bi-polar and is sleeping with his brother. Uxbal makes a living by working with illegal aliens in Spain, mainly Chinese; finding them work and taking a commission off the top. A group of Africans he works with are arrested by the corrupt cop that Uxbal pays off every month when they sell drugs and pirated items in areas of the city the police have cited as off limits. All of these story elements and many others are piled together on top of one another, more or less failing to add up to a plot as we follow Uxbal over the course of the last few months of his life.

There is one bizarre plot point that I have to single out and that is that Uxbal can see and speak with the dead. Why he has this power is never explained. He and the movie treat it as if it were nothing. He makes a small amount of money by relating messages of the recently deceased to their relatives, but that's about it. Now think about that for a second. He can fucking talk to the dead! That's such a huge 800 lb gorilla in the room that is simply ignored. The rest of the movie is this depressing, real story, but it has this surreal aspect just stuck into it and then never goes anywhere with it.

The only benefit to Uxbal's powers is that it allows director Alejandro Gonzalez Inarritu the chance to throw in a few visual tricks. If you watch Uxbal's reflection in mirrored surfaces you'll see that it doesn't match his movements. His shadow as well seems to occasionally move of its own free will. This is visually very interesting, but why this happens is never explained.

Bardem does deserve all of the praise that's been heaped upon him. His emotions are written on his face. Because of his petty criminal behavior and some of his actions you may not always think he's the best person, but you will definitely empathize with him. His love of his children and his desire to see them cared for after he is gone is quite real. It's a career performance from a brilliant actor.

The fact that the plot meanders all over the place is made worse by the 2 and a half hour running time. There's absolutely no need for it to last so long. And since this is such a dark and depressing movie, you feel every minute of it.

Yes, Javier Bardem is brilliant here, but even a brilliant performance can't save a too long, too depressing, not enough plot to justify its length film like this one.