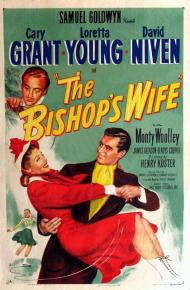 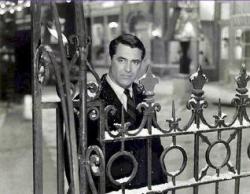 Cary Grant in The Bishop's Wife.

The Bishop's Wife is a romantic comedy set at the holidays. It stars Cary Grant as an angel sent to help an unhappy Loretta Young. She is married to David Niven, a recently promoted Bishop who is too preoccupied with raising funds for a large new cathedral to pay his wife and daughter any attention. Actually it is in answer to the young bishop's prayers for guidance that Dudley is sent, but his solutions are different than what the clergyman had in mind.

Christmas themed movies were popular in the late forties. The Bishop's Wife came out around the same time as It's a Wonderful Life and Miracle On 34th Street. Although it was remade in the nineteen-nineties as The Preacher's Wife starring Denzel Washington and Whitney Houston, it has never been a perennial television favorite like those other two movies have become.

Dudley easily charms his way into the Bishop's life, assuming the role of his assistant. Of course things are much easier when you have Heavenly powers at your disposal. In the movies most famous scene the angel and the Bishop's wife go ice-skating. They are suddenly doing incredibly graceful spins and fancy figure eights. I don't know for sure but it really looks like Cary Grant is doing his own skating. Everyone in the household is immediately won over by Dudley, except, of course, for the skeptical Bishop. But, this being a 'Holiday' movie and all, you just know he will come around eventually.

Veteran character actor Monty Wooly has his best role since he played the caustic critic, opposite Bette Davis, in The Man Who Came to Dinner. Here he plays Professor Wutheridge, a free-spirited - if slightly befuddled (not to mention alcoholic) - Classical Historian. Unfortunately he is unable to write his great Roman history because everything important has already been said. Dudley helps him out with some information that only an angel would know. And also gives the old drunk the present of a perpetually self-refilling bottle of Port.

Hollywood legend has it that producer Sam Goldwyn originally planned to have Cary Grant play the Bishop and David Niven play the Angel. Thankfully Cary Grant convinced him to switch the roles. While not a great movie, The Bishop's Wife is a pleasant and charming addition to any holiday movie collection. 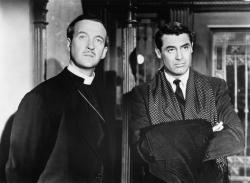 David Niven and Cary Grant in The Bishop's Wife.

One has to wonder if it isn't the overt religious overtones running through The Bishop's Wife that has kept this film from being shown regularly on television during the holiday season since you rarely see any mention of Christianity on television these days. There's also a rather melancholy feeling permeating the story, and the ending, while happy, is hardly an upbeat one. There's a subdued quality to the entire film.

The script was written by Robert E. Sherwood, most famous for writing The Best Years of Our Lives for which he won the Oscar for Best Screenplay. He'd also been nominated for the script for 1940's Rebecca. A good writer, but hardly with a resume for light, romantic comedies. Although another writer, Leonardo Bercovici, would be brought in for rewrites and even Billy Wilder would rewrite a few scenes without credit, I wonder if it wasn't Sherwood's original script that keeps things more serious and downbeat.

Even Grant, who is at his best when playing light and charming, seems weighed down here. He's still Cary Grant of course and so manages to carry off the part, but given his comedic ability his talents feel wasted. It's the ending for his character, the angel Dudley, that is the least happy. He brings magic to the Bishop and those around him, but then he goes off alone, lonely and unremembered.

As with seemingly every film from the Golden Age of Hollywood, there are plenty of rumors and behind the scenes stories floating around the internet. Reportedly, Grant and Young didn't get along during the shoot, arguing in one scene over whose best side should be shot when their characters faced each other. Eventually the director chose to shoot them with Grant standing behind Young, with both of them looking out a window so the same side of their faces could be shown at the same time. Also, as Patrick wrote, Grant was originally cast as the Bishop before switching to the part of the Angel, although different sources give credit for the switch to different people, some saying it was Grant's idea, while others say it was director Henry Koster who suggested it.

Patrick mentioned Monty Woolley's character of the Professor. Dudley's solution for helping him seems a little odd. Is he really not writing because he can't think of anything original to write, or is he not writing because he's clearly an alcoholic? Either way, Dudley's idea to get him writing is to give him a bottle that never runs out of liquor. In any case, I agree that Woolley does a good job with the part, but he too is played for less laughs than he could have been.

The one character who really seems to be inserted for comedy relief is Sylvester the cab driver, played by veteran character actor James Gleason. He even resorts to pratfalls in the ice-skating scene Patrick mentioned.

I agree with Patrick's summation. This is a decent enough movie, well worth a watch, but it falls short of being a true classic. Given the talent on display here, it should have been better than it was. 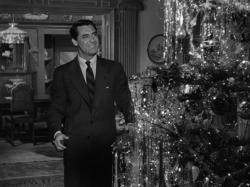 Cary Grant in The Bishop's Wife

In my opinion, the reason this film has never become the classic holiday tradition as some is because of its grey morality. Cary Grant, as an angel, dates a married woman. Sure, there is never any threat of anything sexual happening but his actions cause David Niven, as her husband, to become jealous. I know, that is the point but such emotional manipulation is hardly admirable or a method we think of as Christian. Even Sylvester assumes that Grant and Young are a couple, even asking Young, in front of Niven, if she is getting married to Grant. Even the hint of infidelity is unsavory, especially in a Holiday film filled with Christian references.

There are plenty of great holiday/seasonal moments. The ice skating scene is one of the best. No way Patrick, is that Cary Grant doing all of those skating moves. If he did, they would have made a point to show off that fact instead of hiding the skaters face in shadows. There is also the scene where Grant magically decorates and illuminates the Christmas tree. To me, such antics as that and sorting papers with “magic” contradict the scene where Niven asks for proof that Grant is angelic and Grant refuses to do any such cheap tricks. I prefer the tiny miracles Grant performs such as walking the blind man across the street and tapping the driver on the shoulder to avoid a collision.

This film’s heart is in the right place and it is always enjoyable to watch Grant work his screen magic, and by “magic” I mean charm. I agree with Scott that his performance seems weighed down here but he is still Cary Grant for God’s sake. The scene where he says goodbye to Young is awkward as we see that he and Young do have feelings for each other. So it was God’s work for him to turn on Young and make Niven jealous?

As a last note, if you blink you may miss George Bailey’s cameo appearance. When Grant meets Young and her daughter in the park, a group of children are having a snowball fight. Robert J Anderson, who played young George Bailey in It’s A Wonderful Life (1946), is the leader and ends up with a snowball in his kisser. You can just imagine him later leading the other children, including his brother Harry, over to the pond hill to go sledding. I thought that was a brilliant little nugget.