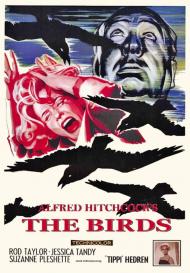 I can remember watching The Birds many times as a kid and being scared by it.  Rewatching it now, I really didn't expect to like it very much.  I assumed that it would be so dated as to have lost all impact.  I should have trusted Hitchcok more.  The only thing dated about this movie is the special effects.  It still manages to provides some scares, suspense and at least one shocking moment, and also a surprising amount of characterization.  You can see its influence on many films today.

Hitchock was called the master of suspense for a reason.  The Birds starts fairly slow.  Melanie (Hedren) meets Mitch (Taylor) cutely in a bird shop.  He's there looking for a pair of love birds for his kid sister's birthday and he pretends that he thinks she works there.  In reality she's the rich daughter of a newspaper publisher with something of a fast reputation.  There are a couple of shots of birds swarming in the air, but nothing unusual happens for quite a while into the film as we get to know the characters.

On a whim, Melanie tracks Mitch down to his mother's house in the remote seaside town of Bodega Bay.   She buys a pair of love birds and drives up to give them to his sister.  Once in the small town she is attacked by a single gull.  Later a swarm of birds attacks the children's birthday party and subsequently the bird attacks start coming in increasingly violent and frenzied attacks.  They eventually lead Melanie, Mitch, Mitch's sister and his mother to isolate themselves inside their house in scenes that would be repeated in many future horror movies, particularly zombie films such as Night of the Living Dead.

While the attacks are occasionally scary, it's actually the scenes between the waves of attacks that are the most frightening.  Given the limitations of the special effects, it's impressive that the scenes of attack are as scary as they are.  You can easily tell when the birds are fake, which is most of the time.  They are much scarier in your mind.  Several times the cast walks past or through large groups of birds who perch and watch them as they pass.  The suspense of not knowing if or when they will attack is the really scary part.  A single crow isn't scary, but a flock of thousands all around you, watching your every move, can be terrifying.

One scene in particular that I remembered as being shocking, remained shocking to me when I rewatched it now and that is the moment when Mitch's mom discovers the corpse of a neighbor that has been ravaged by birds.  It's quite graphic for the time period.

An important part of any horror film is that you empathise with and like the main cast.  Hedren as Melanie is quite good, as is a young Suzanne Pleshette as the school teacher who pines for Mitch.  In fact, all of the female characters are more fully developed than the male as Mitch is fairly dull, without too many distinctive character traits while the women are all given depth.

Since 2007 there's been talk of a remake of The Birds, but I don't know why they'd bother.  The only thing they could improve would be the special effects.  Which director working today has the balls to try and top Hitchcock? 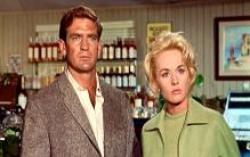 Rod Taylor and Tippi Hedren in The Birds.

The female leads are better developed, but they are nothing more than helpless, emotionally motivated retards.  When Melanie goes into the bedroom, she is too overcome by birds to figure out that she simply has to open the door to escape.  She is too helpless to leave the phone booth until Mitch guides her out.   When Melanie and Annie are in the school, with hundreds of birds massed on the playground, the brightest idea these dimwits can think of is to send the kids outside?

I cared not what happened to any of these ladies.  Lydia is still missing her husband, so she is a bitch to every woman who dates her son.  Mitch broke up with Annie but she still moved to his home town to be near him.  Stalk much?  Melanie brags about not being a lay about rich girl because she has a couple of meager jobs, that take up a few hours of her week.  Poor baby!

The best scenes are in fact not the attacks, but the suspense building to them.  The best is when Hedren sits on a bench to have a cigarette, while crows are massing on the playground behind her.  It is quite an affective scene when she turns and finally sees them.  Another good one is when Taylor opens the door and sees the birds covering the yard he is about to walk through.

The Birds was based on a short story, so it was padded. I wish they had stuffed the story a little less and gotten to the attacks quicker. It is nearly and hour into the film before the birds attack the children at the birthday party. The beginning of the film is intended to get you to know the leads, but when you look back at this film, all you will remember is the last hour.

Lastly, is that the movie never explains why any of it happened.   The birds just decided, for no reason, to attack this particular town one day?  We never find out if the four survivors at the end actually make it to safety.  The most important question though, is what is it about  Mitch that drives Annie to uproot her life to be near him, or Melanie to drive across a state just to play a joke on him?  Sure Taylor has matinee idol good looks, but Mitch has very little personality.  All of that time spent developing the leads was essentially a waste of screen time. 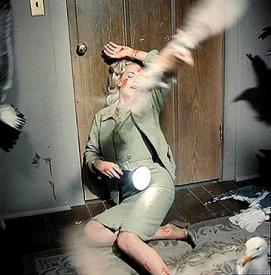 The fabulous Tippi Hedren getting messed up by berserk birds.

This movie has so many iconic scenes. My favorite is when the man lights the gasoline on fire and causes the car to explode at the gas station outside of the restaurant. Then we see the fire and carnage from the air. Suddenly several birds enter the shot and we realize Hitchcock is giving us, literally, the proverbial bird’s eye view. This is followed immediately by Melanie in the phone booth.

Eric, the erratic behavior of the women is more a reflection of the time era than anything else. The one woman that contradicts the stereotype of the helpless female is the mannishly dressed (perhaps a lesbian?) scientist in the restaurant.

Tippi Hedren (Melanie Griffith’s mother by the way) looks fabulously stylish throughout the movie. Rod Taylor is his usual stiff self. Jessica Tandy is the best actor on hand.

I like the ambiguous ending, it adds to the eeriness.  The final shot is brilliant in my opinion.  Despite the lack of today's sophistication in some of the special effects, The Birds remains a 4 star classic horror movie.