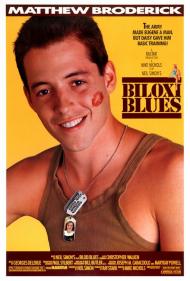 The boys pay a visit to Rowena, the towns prostitute.

Scott and I once saw the Broadway touring production of Biloxi Blues.  I do not recall if it was before or after the movie came out.  It works well under either medium.  Neil Simon wrote the play as well as the screenplay.   It is the second chapter of Simon's semi-autobiographical "BB" trilogy. The first one is Brighton Beach Memoirs, with Jonathan Silverman playing Eugene. The last is Broadway Bound.  Corey Parker, who played Epstein in Biloxi Blues, played Eugene in the made for television version of Broadway Bound.

Matthew Broderick plays Eugene in this installment, and it is some of his best work.  As was Broderick’s one time tradition, he narrates the story.  The movie opens with him heading to Biloxi, Mississippi for Army boot camp.  We meet and get to know five other soldiers in his platoon.  Simon writes them as real folks, flawed and likable at the same time.

The company Commander is a bit clichéd.  Walken plays the sergeant as your stereotypical loud, domineering boot camp instructor.  He gets a little characterization later in the story, but it is really Eugene's story.

Eugene losses his virginity to a prostitute in what was easily the funniest scene in the play.  The actor and actress had to feign awkward sex under a sheet, in front of an audience.  In the movie they recreate the scene, but it loses something as they still keep their clothes on.  I did not need to see Overall and Broderick completely naked, but it hardly seemed to make sense for them to stay dressed.

Simon spreads his story with equal parts humor and drama.  One of the best scenes is when a fellow soldier, Wykowski, finds Eugene's journal and reads it out loud.  In it, Eugene describes what he honestly thinks of each of his buddies.  Some are upset while others are surprisingly complimented.  One of his notes is that he thinks Epstein is gay.  Not only does that offend him, but when it is discovered that there is an actual homosexual in their platoon, everyone assumes it is Epstein.

Broderick’s best moment is when he is confronted by a drunken Sgt. Toomey.  He brandishes a gun and threatens to kill Eugene.   Toomey eventually discloses that he is being kicked out of the Army, and is very upset by it.  He orders Eugene to take his gun from him.  A red faced Broderick wrestles with it until Toomey finally let’s go.

As this is a memoir, it is very nostalgic.  The ending is a narration of Eugene explaining what happened to the other men, except the homosexual.  I wish he would have included him, since homosexuality was a jailing offense at the time.  Even though in the story he did not always get along with the guys, he notes that looking back he now loves them all.

Let me take a moment to be nostalgic.  Biloxi Blues was the one and only play Scott and I ever saw together.   It seems like a lifetime ago.   We have only seen each other a couple of times in the last decade.  It is true, the older you get, the more important your memories become.