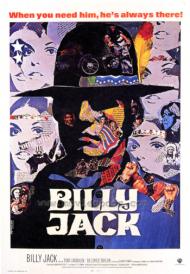 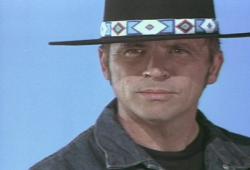 In the early 1970s Tom Laughlin's half-breed, ex-Green Beret, martial arts expert named Billy Jack became a national sensation. The character had appeared in a movie called Born Losers back in '68 but didn't cause any waves until the 1973 re-release of Billy Jack (it was first released for a limited run in 1971). Two sequels to Billy Jack were made but neither lived up to the original.

Made for less than a million dollars by the National Student Film Corporation, Billy Jack was a true "sleeper" hit going on to eventually gross more than 32 million dollars. An amazing amount of money for 1973. The title song "One Tin Soldier" by Coven became a top 40 hit on the Billboard singles chart as well.

As a kid I remember my parents went to see Billy Jack and came home raving about it. After that we watched it on television whenever it was on.

Set in the deserts of Arizona, Billy Jack is about the tensions between a progressive Freedom School run by a hippie pacifist named Jean and the local bigoted townspeople who think of the students as freaks. Billy Jack protects the students, the Indians on a nearby reservation and the wild horses that run free. The main antagonist is the town's most wealthy and powerful citizen and his spoiled brat teenaged son Bernard.

This movie really conjures up the late 60s. There is a scene where the students go into the town for a day and as they ride in on a bus singing freedom songs there are reaction shots of the townspeople that look like they came out of civil rights footage in the south. Naturally this leads to a confrontation between the students and the town-folk and Billy Jack winds up coming to the rescue by taking on about two dozen guys in the park. This is probably the movies' most famous scene and it remains a brilliantly staged and shot action sequence.

The main plot deals with the sheriff's pregnant daughter and how Billy Jack hides her out at the school. This leads up to the bloody conclusion.

The movie is far from perfect. Although Tom Laughlin and Delores Taylor do fine jobs in the two main roles some of the acting by supporting players is pretty amateurish. And the movie could have been trimmed. There are some improvisational street theater scenes (featuring Howard Hesseman) that drag on far too long.

Overall Billy Jack remains a powerful, if somewhat naïve, movie. It has good cinematography, several spirited songs from the era like, "Freedom Over Me" and "A Rainbow Made of Children", but most of all it has Billy Jack, in my opinion one of the greatest movie heroes of all time.

Like Patrick, I have fond memories of watching this movie as a kid. Not having seen it in over twenty years, I was curious how I would view it as an adult. Like my brother, I was disappointed, but also less forgiving than him. While there are a few scenes that I enjoyed, none of them lived up to my memory and the entire film could have been trimmed by at least forty minutes as the actual story is relatively scant and the scenes at the school are all laughably dated.

The only good thing the movie has going for it is the character of Billy Jack and even he is deeply flawed. There is far too much Indian spirituality mumbo-jumbo and not enough explanation of his character. He's a war hero who hated the war, we are told, so perhaps he is experimenting with an Indian religion as a way of finding peace, but it is all taken so completely seriously that it's impossible for me to take it seriously. And Jean, a self-proclaimed pacifist, is in love with the most violent character in the movie? What's that about?

I also found it funny the things I noticed this time around that I never thought about as a kid. I remember thinking that the sheriff wasn't a bad guy, but actually he's the biggest wuss in the entire movie. He turns a blind eye to everything Posner does and yet we're supposed to think of him as sympathetic? Another thing is when Billy Jack busts in on Bernard to extract his revenge, he asks the girl who's sleeping with him how old she is, and she replies that she's thirteen. She then gets out of bed for a full frontal nude scene. Wait, didn't they just establish that she's only thirteen, which is another piece of evidence of the vileness of Bernard's character, and now she's doing a nude scene? To what purpose other than to show us a naked girl? And the final thing I noticed this time is Billy Jack's amazing psychic powers. He's able to tell that the townspeople have disabled his jeep when he's inside the ice cream shop and he knows that Bernard raped Jean without anyone having to tell him. What's he doing stuck on a reservation? He could make a fortune in Vegas.

The real tragedy of this movie is that in the right hands it could have been great. A tighter, more sensible script, with professional actors in all the roles and it could really be something. Perhaps a remake is in order. 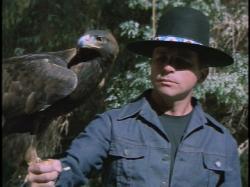 This movie is a laugh from start to finish. Jean is a pacifist yet she and her school needs to be protected from someone who is not. She has all of these students with whom she tries to teach to be proud of who they are. Students are shown doing artsy ethnic stuff. That is all fine and dandy but what about a real education that may get them a job some day? Who pays for this school anyway? I sure hope it is not from tax dollars from evil capitalists.

None of the characters make any sense. How does Jean, who runs a school full of emotionally disturbed kids, have time to go off skinning dipping and sun bathe nude? What in the hell is Billy looking for in all of that Indian spirituality? He is as lost as all of the teenagers. If he had his shit together he wouldn’t need to smoke cannabis and get bit by a snake in hopes of a higher consciousness. The one character that seems real is the sherif. Sure he overacts to the news of his slutty, disrespectful daughters pregnancy, but being upset about the fact that she is about to carelessly bring a crack baby into the world is understandable.

Billy Jack is a hippies look at the world. They want peace, love and sex but not the responsibility that comes with those things. They know the towns people don’t like them so why do they go into town in such an obnoxious way? It was almost like they were taunting them. Different people getting along is not about one side changing, it is about both sides understanding the others boundaries. The hippie kids go to town singing and doing street theater. The townsfolk don’t go to the school to bother them.