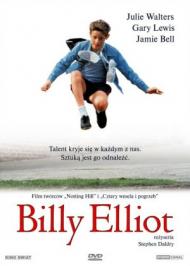 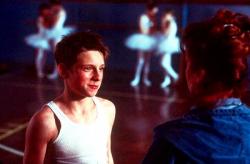 I have been meaning to get around to seeing Billy Elliot for years.  I have always heard good things about it, and was slightly curious if it would stand up to all the compliments.  It not only lived up to the reviews, but far exceeded them.

Billy Elliot is an emotionally wounded 11 year old boy.  His mother has recently died.  He lives with his dad, older brother and senile grandmother in a mining town in northern England.    His dad and brother work for the mine and are preoccupied with a strike.  His dad forces Billy to take boxing classes at a local gym.  An all girl ballet class is taught there as well.  They get his attention, and he soon joins them, while pretending to still go to boxing lessons.

Billy's brother is a carbon copy of his dad.  Both are slaves to the mine and traditions.  Billy's mother had a love of music and Billy obviously took after her.  Without his mom to support him, Billy hides his love for ballet, and his instructor, Mrs. Wilkinson, becomes his surrogate mother.

One day Mrs Wilkinson tells Billy, "This'll sound strange, Billy, but for some time now I've been thinkin' of the Royal Ballet School."  Billy responds,  "Aren't you a bit old, miss?"  To which the irritated Mrs. Wilkinson answers, "No, not me... you! I'm the bloody teacher!"

With the auditions being in London, and his dad being out of work, Billy knows an audition is an almost impossibility.  When his father discovers that Billy is doing ballet he of course objects.  "All right for your Nana, for girls. No, not for lads, Billy. Lads do football... or boxing... or wrestling. Not friggin' ballet!"

All the odds are piled up against Billy.  He almost gives up on his dream.  In one of the best scenes, Billy and his best friend sneak into the gym at night, and Billy shows him how he dances.  His dad walks in on them and Billy stops cold staring at him.  Then he digs deep within himself to find his courage, and find it he does.  He dances for his dad like his life depended on it.

Billy's dad, who up to this point has seemed like a cold bastard, decides to help Billy.  He crosses the picket line to the anger of his co-workers and his elder son.  I was in tears as his dad was going to such a length to help his son.  This action could ostracize him from the whole town but he was doing for his love for his son.

Such is the enormous power of Billy Elliot.  Rarely have I felt so much emotion watching a movie.  I am not ashamed to admit that I laughed and I cried.  Billy Elliot encompasses so much. It is a family drama, a coming of age film, a musical and a comedy.  Above all else, it is one of the greatest feel good movies of all time. I came away form this movie feeling like a better person. Watching these people grow and love each other touched my soul like no movie has ever done

Much credit has to be given to Jamie Bell.  He helps make Billy so damn likable, you have to root for him.   He is slightly goofy and very expressive.  Bell won a BAFTA (British Academy Award) for Best Performance by an Actor in a Leading Role, beating out Russell Crowe, Tom Hanks, Geoffrey Rush and Michael Douglas.

The one and only forgivable mistake is that Billy incorporates lots of tap dance into his dancing.  In real life it is Bell's preferred style, but never in the movie is Billy ever shown any tap steps.   It is a minor quibble in one of the greatest films to ever come out of the United Kingdom. 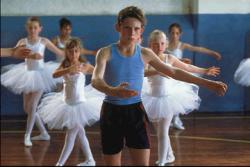 This is definitely one of the all-time feel-good movies. Thankfully the script and the acting keep it from ever going over the edge and becoming maudlin although it comes close a few times. The happy ending is never in doubt.

Everyone in the cast is excellent. Jamie Bell is perfect in the title role, Gary Lewis is brilliant as the disapproving father whose love for his son moves him to sacrifice so much for his son’s dream, and Julie Walters strikes all the right notes as the down-on-her-luck, chain-smoking dance instructor.

The relationship between Billy and his father is the heart of the story. At the beginning they are emotionally distant from each other. Billy’s father doesn’t really know his youngest son at all. It is through dance that Billy finds his passion and it eventually brings him and his father together as well as provides a means for Billy to get out of the slums.

I agree Eric that this movie combines elements from many different genres. It is first and foremost a coming-of-age story but it blends in comedy, drama and music into one big delicious movie smoothie.

My favorite relationship in the movie though is one that you barely touched on Eric. It’s the one between Billy and his best friend who just happens to be gay. The scene where Billy goes to his friend’s house and discovers him dressing up in his sister’s dress and wearing make-up is handled beautifully. Billy is at first a bit shocked, but having had his own masculinity called into question over his love of ballet has perhaps made him more accepting towards his friend’s sexual orientation than he would otherwise have been. The scene where Billy says goodbye to him and gives him an innocent peck on the cheek in full view of his father and brother is very touching and sweet.

I’m not surprised at all that Billy Elliot has become a successful Broadway Musical. It has all the necessary ingredients. Yes this is definitely one of the all-time feel-good movies that will resonate with anyone with a heart beating in their chest. 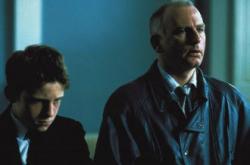 Jamie Bell and Gary Lewis in the heartwarming Billy Elliot.

As far as feel good movies go, they don't get much better than Billy Elliot. This plucky little Yorkshire lad and his dream of becoming a dancer will bring a tear to your eye and a smile to your face. I agree Patrick that it's completely predictable, but that doesn't reduce the feel good quotient one iota.

The movie does indeed belong to young Jamie Bell. He handles the dramatic moments as well as the lighter ones equally well. There's really not a bad performance in the film though. Julie Walters is terrific in the supporting role of dance instructor. She has limited screentime, but she makes the most of it. Likewise, Gary Lewis does a great job as the gruff father still grieving from the loss of his wife.

The miner's strikes in the early 80s, when Margaret Thatcher broke the union's back, was a fairly dark and tulmutious time. It's impressive that such an upbeat movie was able to be made with that as its backdrop. It succeeds by keeping the point of view from Billy. The details of the strike are over Billy's head. He passes police in riot gear on his way to school every morning without batting an eye. They are just a part of the landscape. Even Billy's brother running from the police is handled lightly.

Eric, I didn't see the tap dancing as a problem. It's true that we don't see Mrs. Wilkinson teaching Billy to tap, but Billy is shown tapping many times before his audition. I just assumed he was taught it offscreen.

Anyone who's ever had a dream will find plenty to cheer about in this wonderful and heartfelt film.