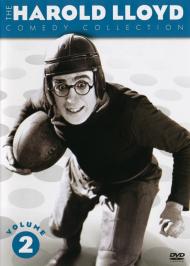 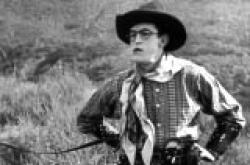 Harold Lloyd made one hundred short films as "Glasses guy."  Out of so many films he was bound to make a couple of duds and Billy Blazes, Esq. is certainly one.

Harold plays a cowboy who saves a bar owner and rescues his daughter from some bad guys.  In thirteen minutes of film Harold does not appear until five minutes into the movie.  Most of the film is just bad guys shooting at each other, but no one actually gets shot.

The cowardly sheriff and the tall Chinese waiter provide the best laughs. In silent film dramas, sex was tiptoed around.  For some reason comedies actually got away with more than dramas.  A bad guy grabs Bebe Daniels and forces her up to a room where the only piece of furniture is a bed.  Gee, what is on his mind?   Not to worry, in between shoot outs, Harold will find time to preserve her honor.

Billy Blazes, Esq. is not one of Lloyd's best shorts.  He normally played a ordinary man of the time.  This one goes against type and comes up very short.  It may have been considered better at the time as a parody of William S. Hart, but I found little to enjoy.

Yeah, I agree with Eric. This isn't one of Lloyd's better shorts. Part of the problem is that although he looks like his “Glasses” guy persona he is much braver and more naturally heroic than he normally played. Usually he came out on top due to some fortuitous coincidences. Here he is more of a straightforward hero. As a parody of William S. Hart it would have been recognizable to audiences of the day but has long since lost any humorous connotations in that regard.

Lloyd would revisit the Western genre in an Eastern Westerner the following year. But that time he would play his usual meek character that gets sent out West by his father. Of the three giants of silent comedy Harold Lloyd's screen persona was the most modern and urban. Chaplin, as far as I know, never made a Western, but Keaton did and more successfully than Lloyd.

This movie is at least very fast paced. Bullets fly like popcorn across the screen without ever causing any harm to anyone that gets hit. I agree with Eric that the tall Chinese waiter, with his funny quick shuffle of a walk, is worth a laugh or two. And Lloyd gets to do some of his daring physical comedy.

But perhaps the funniest thing about this short is the title cards. Here are my favorites. “You owe 11 years rent. Pay or vamoose.” “Sitting Bull once stopped here on his way to dancing school.” and “Drive him over the border and shoot off his feet. Save the shoes.”

The final scene is quite amusing, although I won't give it away. 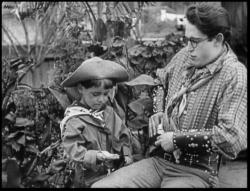 Harold Lloyd teaches a toddler how to roll a cigarette in Billy Blazes, Esq..

This short is a departure for Lloyd. As my brothers wrote, normally he played his stock Glasses Character as a modern man, earnest in nature, usually hopelessly in love, eternally optimistic, and almost always up against forces bigger and stronger than himself. Here though, he's playing the hero, always in control of the situation and never in any danger. I kept waiting for it to end with Harold being woken up by his boss in an office, where Harold would have fallen asleep on his lunch hour while reading a Western dime novel.

Despite the change though, I seem to have enjoyed this short more than my brothers. I agree that it takes too long for Lloyd to make his appearance, but once he shows up the short moves at a very quick pace. The gangly, Chinese waiter is amusing (if a little stereotypically racist (but at least he's played by a genuine Asian)), but the best sight gag is Lloyd's quick draw ability. No matter which way he's facing or what position he's in, he is always able to draw his gun before the villain. And like Patrick I laughed at the final joke as well.

According to TCM, both Lloyd and the director, Hal Roach, had worked as extras in several westerns in 1912 that were shot on a town exterior located at Mixville, named after movie cowboy Tom Mix. It must have been a triumphant moment for them to return to that very exterior, seven years later, to shoot this film, not as bit players, but as star and director.

I agree, not his best work, but like all of Lloyd's short, it still packs in plenty of amusement. 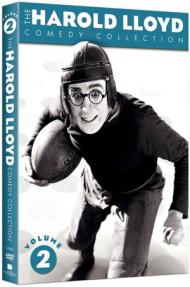