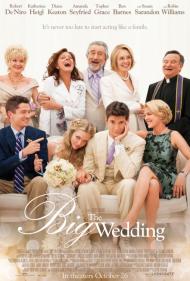 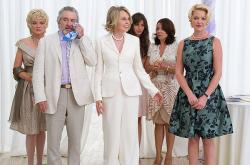 Great actors can make a good movie even better. They can add nuance to dialogue and express feelings with their faces and eyes that were never even in the script. When it comes to bad movies, though, there's not much even the best actors can do to make them better. The Big Wedding is the perfect example of that. The cast is packed with several big names and many recognizable actors, but the plot is so contrived and the dialogue so weak that rather than enhance the film, the well known cast simply draws attention to the awfulness of the script, because from this group of actors we expect something better.

Remember when Robert De Niro took acting seriously? These days it seems that he'll take any role that offers him a paycheck. Did he even bother to read the script before he took this part or did he just ask, "How much?" Not that his performance is particularly awful, but it is particularly bland. And he's not alone. Everyone else is equally bland, from Diane Keaton right on down to an unusually subdued Robin Williams as the local priest.

The plot is as silly as something from an old sitcom. An extended family gathers for a family wedding. The groom, Alejandro (Ben Barnes), is the adopted son of Don (De Niro) and Ellie (Keaton), who are now divorced. Alejandro has also invited his devout Catholic birth mother from Colombia, who, naturally doesn't speak any English. For reasons that never make sense, Alejandro decides that he can't bear the idea that his birth mother discover his adopted parents are divorced and so gets them to pretend to be married again for the wedding weekend. Family hijinks then fail to ensue.

There's lots of other attempts at heartwarming silliness, all of which fail miserably. Susan Sarandon plays Bebe, Don's live-in, long term girlfriend and former best friend of Ellie's. She's not too happy at being put out of her own home for the weekend. Katherine Heigl is Lyla, Don and Ellie's daughter, who is going through marital difficulties and has some severe daddy issues.  And in the least successful storyline of all, Topher Grace plays the other son, Jared, an almost 30 year old virgin who falls in lust with Alejandro's biological sister, who strips naked in a nude scene that stands out in contrast to the family friendly storyline of the rest of the movie.

For a supposed comedy, this movie is bereft of any real laughs, unless you count laughing at how bad it all is. And the attempts at drama fare no better. Heigl and De Niro try for the film's most serious scenes with their father and daughter reconciliation, but it falls just as flat as the comedy.

Casting big name stars in a film is a double-edged sword. If the movie's good, they can make it better. However, it can also raise expectations and make a bad movie seem even worse by comparison. An unknown cast wouldn't have made this movie any better, but at least it wouldn't have seemed like such a waste of talent. 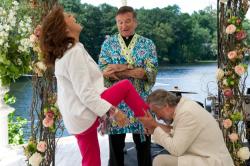 It's a bunch of big name stars playing a dysfunctional family with a capitol D. They argue, lie and spout vulgarities at each other for 90 minutes, which is the good news. At least it doesn't last too long. And not only is the script completely unfunny but the characters aren't even likable. De Niro's patriarch is a horn dog who cheats on his long-time girlfriend with his ex-wife and then brags about it.

The jokes are all painted with broad strokes and bright colors but they're all eminently forgettable. The script doesn't have an original idea or thought in it. The central plot device was already creaky and ancient when it was used on The Golden Girls back in the 80s. You remember the one where Sophia's brother the priest visits from Sicily and Dorothy and Stan have to pretend to still be married?

It is seriously no exaggeration to say The Big Wedding is the least funny comedy I've seen in years. And Scott is right, the presence of all these talented stars actually makes it seem even worse, if that's possible. 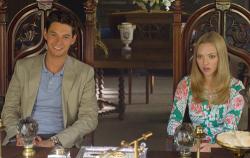 Ben Barnes and Amanda Seyfried in The Big Wedding

Although I agree with my brothers that The Big Wedding is riddled with flaws, I was still able to enjoy it more than them, but not by much. This may have been due to their reviews lowering my expectations. Either way, this mostly dull, yet harmless, film is not quite as bad as my brothers wrote, but nearly.

The biggest problem for me is that I never understood anyone’s motivation or even liked anyone. A 29 year old virgin doctor waiting for love to have sex? The parents are all unfaithful. A guest in their home decides to skinny dip in front of the hired help and the virgin, whom she just met that day? The worst character of all is Alejandro (Barnes), who caused this ridiculous arrangement.

One of my favorite scenes is when Barnes and Seyfried are being counseled by the pleasantly pushy priest played by Williams. “Divorce…which is a sin in the eyes of God, but no pressure.”  After Williams asks, “Is Ms. O’Connor’s virginity still intact?” Barnes says they used birth control. Williams raises his eyebrows and says, “I see.” and makes a note. (Birth control is considered a sin by the Papacy.) When he asks if they will raise their children in the church, Barnes responds that they will wait until the kids are old enough and let them decide. Williams then remarks, “Hell it is then.”

Whereas I found Williams’s sanctimonious sarcasm funny, Barnes comes across as a pretentious prick. After Williams asks if Barnes speaks English, he answers, “No.” and then says in Chinese that Williams should take his half-a-brain and shove it. He is concerned about offending his mother’s religious beliefs but thinks nothing of disrespecting the priest who is going to marry them? The priest is, in fact, the only one in the entire film to give Barnes real advice. When Barnes asks him if what he is asking everyone to do wrong? Williams responds, “That depends. Are you disrupting the lives of anyone else by enacting your deception?”

Barnes refuses to say certain religious things during the wedding ceremony because he feels he would not be true to himself, even though it would make his fiancé happy? Why is a woman whom he has hardly ever seen, more important than the ones who raised him and the one he is about to make a life changing commitment to? Alejandro is written as an arrogant ass. Michael Buble’s version of “Save the Last Dance for Me” played at the end of the film should have been accompanied by a scene of the entire cast kicking and beating some sense into Alejandro.