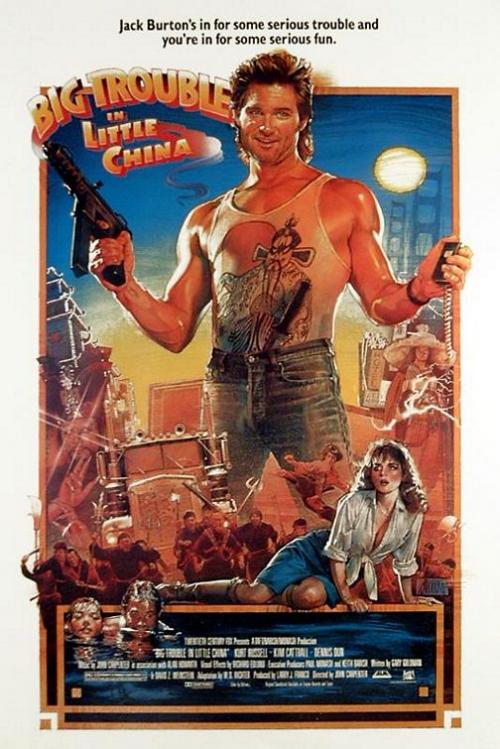 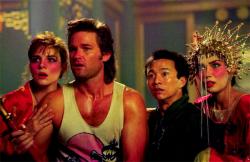 Big Trouble in Little China lost money during its initial theatrical run. Some said it was poorly promoted by Twentieth Century Fox while others blamed the success of Aliens, which was released just a few weeks later in the summer of 1986. Later that year the similarly themed Eddie Murphy movie The Golden Child stole whatever remaining audience it may have had left. Critically Big Trouble in Little China met with lukewarm reviews at the time. Over the years critic's opinions of it have heated up considerably. It currently holds an 83% Fresh rating on Rotten Tomatoes.

The initial failure of this movie caused John Carpenter to forsake Hollywood for the world of independent film. In the ensuing years, however, Carpenter has been vindicated. Big Trouble in Little China quickly became a cult hit on home video and its stature has continued to grow over the decades. Seen today it's a fun, brightly colored, martial arts/screwball comedy with a memorable central performance by Kurt Russell as truck driver Jack Burton.

Burton gets caught up in a dangerous adventure in San Francisco's Chinatown. It involves kidnapped green-eyed girls, warring gangs, and an ancient Chinese sorcerer (played to the hilt by James Hong) who lives in a strange underground world beneath the city. The action comes fast and furious and it never really lets up. The special effects were done by the same guys that did Ghostbusters. They hold up fairly well, although it's clear that several of the monsters are really men wearing hairy costumes. Given the cartoonish style of the movie, it works.

Jack -although he's the main character- is really more like a sidekick in this adventure than he is the hero, even if he doesn't realize it. He's a bit of a bumbler, often unsure of his next move, and prone to making mistakes, even accidentally knocking himself out cold at the beginning of one fight scene. John Carpenter has said that it was his intention to turn the stereotype of the comedy-relief minority-sidekick on its head. Here the Caucasian character plays that role while the actual heroes of the story are Chinese. Jack's friend Wang Chi (played by Dennis Dun), and a powerful magician named Egg Shen (Victor Wong), are the true heroes of the story.

Kurt Russell plays Jack Burton by way of John Wayne. He imitates the Duke's speaking voice without doing a flat out impression. He's a fun character, eager and brave but not the brightest bulb on the tree. As the outsider in this bizarre world he provides most of the laughs. The supporting cast includes Kim Cattrall as the female lead, more than a decade before Sex and the City put her on the A-list. She plays Gracie, Jack's green-eyed, know-it-all love interest. They spar verbally throughout the movie in the tradition of Cary Grant and Rosalind Russell in His Girl Friday.

It's easy to see why this movie became a hit on home video. It is one of those fast-paced, fantasy/action comedies as only Hollywood can make them. It is also quite self aware, with humorous little references to many other movies tossed into the mix. The 1980s was the last complete decade of film before the CGI invasion in the 90s. Sure some of the visual effects look cheesy but I still prefer them to the current soulless digital age of cinema. In a nutshell, Big Trouble in Little China is pure movie fun. 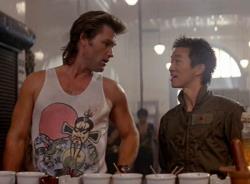 I agree, Big Trouble in Little China is pure movie fun. With a rapid pace and enough silly action, this movie will entertain the whole family, provided they do not take any of the proceedings seriously. In fact, the flaws, and this movie has them, only add to the experience.

As Patrick mentioned, the monsters are simply actors in costumes and the special effects are a bit dated. When one monster, carrying Cattrall, jumps through a hole, you can tell he is about to land on a cushion but then the scene cuts to him landing squarely on his feet. The whole story unfolds with tongue firmly planted in cheek. There is a huge complex of tunnels underneath San Francisco that are populated by monsters and magic wielding Chinese men. Of course, every Asian in the film knows martial arts.

Kurt Russell, as Jack Burton, acts as our guide taking us into, literally, the underworld of Chinese gangsters and wizards. His charm is based on his arrogant cluelessness. I never realized, before reading Patrick’s review, how much he does speak like John Wayne. When some hoods bump into him at the airport he says to them, in true Wayne fashion, “Wait a minute, Hey.” Like the Duke’s characters, Jack plays by his own rules, “Sooner or later I rub everybody the wrong way.”

Whereas Burton stumbles into this adventure, Gracie Law (Kim Cattrall) is already in the know. “Don’t panic. It’s only me, Gracie Law.” She cheerfully announces when entering a room. Cattrall plays her as an overzealous airhead. When Jack first meets Gracie, he says, “May I ask you a serious question?” Gracie responds without interest, “Certainly not.” She and Jack are both eager to help, with their enthusiasm being their greatest strengths.

Chinese-American actor Dennis Dun plays Wang, who is trying to rescue his girlfriend from an old man who likes to travel about in spirit form. Dispelling a stereotype, Dun had to learn martial arts moves for the movie. Dun is likable enough but he has little to do but seem forlorn. His best moment is an eyebrow raise. Wang and Jack have a patriotic line that would make John Wayne proud. Wang starts, “Here's to the Army and Navy and the battles they have won; here's to America's colors, the colors that never run.” Jack continues, “May the wings of liberty never lose a feather.”

Big Trouble in Little China builds to an action packed wedding full of flying sword fights, magic duels, a romantic kiss and an escalator. This movie is over-the-top fantasy fun for children of all ages. 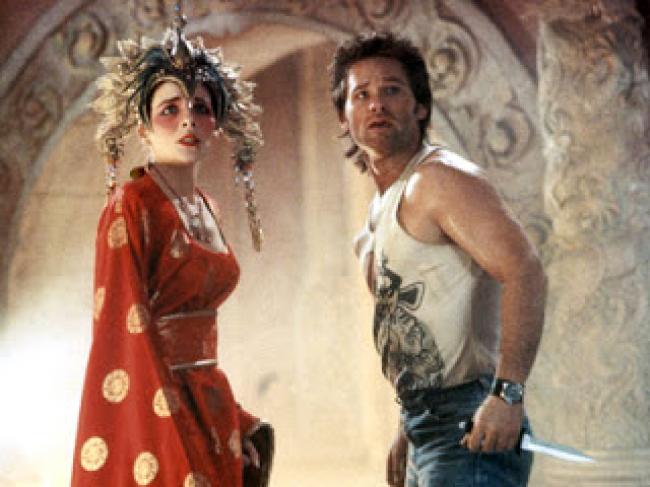 Maybe it's because I'm only now seeing this movie for the first time but I was less entertained by it than my brothers. Perhaps if I'd seen it first as a child my fond memories of it would sand off its rougher edges, but without the rose tinted memories to smooth things over, the film's weaknesses stood out to me. That's not to say I didn't enjoy parts of the film, but it still feels flawed.

The idea of having Jack Burton think that he's the hero, but in reality being the sidekick, is an interesting one. Russell plays him with a comic swagger that is enjoyable to watch. On the actual adventure itself he's almost no help whatsoever until the very end. As Patrick mentioned, he even knocks himself out at one point. However, to really sell this idea they needed a more charismatic or talented actor in the part of Wang Chi. Jackie Chan was Carpenter's first choice, but the studio rejected him, fearing that his English wasn't strong enough for such a large part. Although to be fair to Dennis Dun, the actor eventually cast in the role, part of the blame for the weaknesses of his character must fall on the writers. The studio also wanted a bigger name in the lead, suggesting Clint Eastwood or Jack Nicholson and thus showing how little they really understood the tone of the movie.

As my brothers mentioned, the special effects are very dated, but given the nature of the story, this has little detrimental effect and will probably enhance the nostalgia for those who saw this movie as a child. Since the level of humor is on par with a cartoon, as is the action, it doesn't hurt that the special effects also look cartoony. It's obvious from the start that this is a very stylized world we're entering and that we aren't meant to take any of it seriously. This keeps things light and breezy, but it also sucks all of the tension from the story.

And that lack of tension was my biggest problem with the film. The action is straight out of a cartoon with all of the implausible and physics-defying implications that brings. None of these characters are ever in any real danger. The tone of it all feels appropriate for an adolescent audience, but left me wanting more.

Recently it was announced that Dwayne "The Rock" Johnson was producing and planning to star in a remake. No doubt the special effects will be cutting edge, but will it be able to retain the original's kitschy charm? A more suitable remake would be a video game version with the characters voiced by the original actors. That would give fans of the original the opportunity to relive the film in a different, but similar enough way. And the humor in the original script is about on par with what you find in many video games.