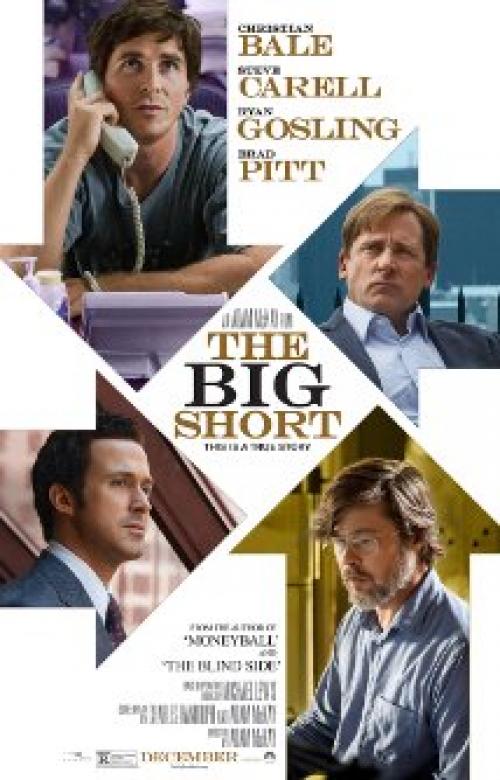 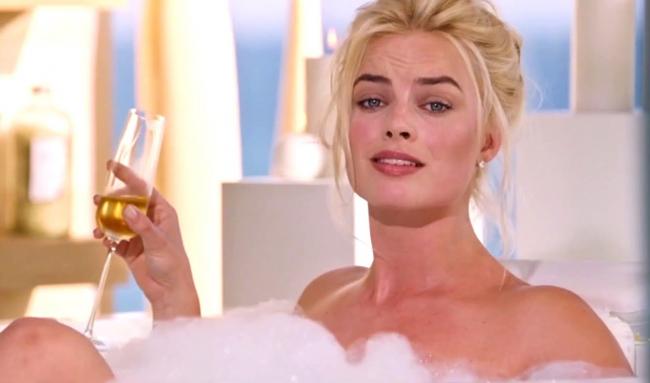 There are two surprising things about The Big Short. One is how entertaining it makes the subject of high finance and the other is the fact that it was directed and co-written by frequent Will Ferrell collaborator Adam McKay, the man behind such films as Anchorman, Talladega Nights, and Step Brothers. Here he reins in his broader humor and produces a still funny, but insightful look at the financial collapse of 2007, without treating the subject with anything less than seriousness. Instead it uses humor to inform.

The plot covers the collapse of the housing bubble that precipitated the financial crisis, which sounds like a dry subject for a movie, but as told here isn't. It tells the story from the perspective of three different groups of investors, each one of which features a character played by a famous actor based on a real person. Each of these groups saw the collapse coming and were able to make money from that knowledge, something that makes the film's message rather mixed.

Christian Bale plays hedge fund manager Michael Burry. He's an eccentric financial genius who learns the truth about the state of the mortgage market by literally poring through hundreds of thousands of lines of spreadsheet data showing individual mortgages. When he sees that the housing collapse is inevitable, he uses that knowledge to purchase a credit default swap, which is basically an insurance policy (or even simpler put, a bet) wherein he pays premiums on the policy and gets a payout if the housing market crashes. Against the wishes of his boss and the advice of everyone else, he puts $1.3 billion into these swaps.

Ryan Gosling acts as the film's narrator and guide for the audience as Jared Vennett, who hears about Burry's crazy investments. Once he examines Burry's data however, he realizes the truth and he convinces market trader Mark Baum (Steve Carell) to invest with him in similar credit default swaps. Carell has slowly been transitioning from comedian to dramatic actor and this movie on top of last year's Foxcatcher, makes the transition complete. His angry trader, coping with personal issues, is the heart of the film and the closest anyone comes to having a conscience about what's happening, although this doesn't stop him from earning a ton of money off the collapse.

The last group is a couple of financial whiz kids from Colorado who learn about Burry's original data from a prospectus of Vennett's, which they find accidently. They connect with a friend, and former investor, Ben Rickert, played by Brad Pitt who also produced the film, who uses his connections to get them in the game.

McKay makes the best use of his comedy background in the scenes where he explains the many financial terms and acronyms. At times the characters will break the 4th wall to make asides to the audiences, even pointing out on occasion when something has been changed for the film to make it more dramatic. During these asides, they often introduce a celebrity who then explains the financial terms in a very relatable way, such as when Anthony Bourdain uses a fish stew as a metaphor, and Selena Gomez does the same with poker chips, or my favorite, when Margot Robie explains high finance while sipping champagne in a bubble bath.

For the most part, the film avoids bringing politics into the story. It blames unrestrained and unregulated greed rather than any specific political party or politician. But this greed is bad tone is where the film's message becomes a bit contradictory. This is the story of financially perceptive men who see a financial collapse coming and who use their knowledge, not to warn or try and prevent (not that there's much they might have been able to do), but to make millions and billions of dollars from it.

I said there were two surprising things about this movie, but actually there's a third thing. Going in, I never expected it would turn out to be one of my favorite movies of the year. 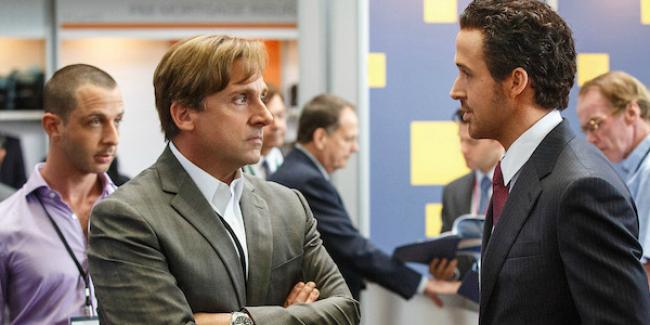 Steve Carell and Ryan Gosling in The Big Short.

I agree. The Big Short is one of the most enjoyable movies of the year. It features a talented ensemble cast, a compelling script that brilliantly balances humor and drama, and stylish direction. High finance and economic recession are words that sound dry but this movie is anything but. As Scott mentioned the story is told in such a winning, at times breezy, manner that it holds the audience's attention even when the characters discuss banal things like numbers crunching.

The entire cast is terrific but the top three billed guys all shine the brightest.

Christian Bale plays another of his method characters. A guy so socially awkward that he spends his life staring at a screen or playing air drums in his office. He has a wife, but he seems to spend his life at work.

Steve Carell continues to impress with his dramatic chops. He gets the movie's most dramatic storyline, having recently suffered the loss of his brother and now dealing with the ensuing guilt he feels.

Ryan Gosling, a man so charming it should be illegal, plays my favorite character. He alone of the three main characters is completely upfront about his greed. He isn't morally ambiguous or struggling with a guilty conscience. His honesty is refreshing.

I didn't really find the movie's message to be contradictory. It isn't saying that making money is bad. It is saying that lying, stealing and cheating to make money is bad. The stock market is like a sport. It only works if the rules are applied fairly to all. When the people who are supposed to be policing the rules break them, you have chaos. And that's the story of The Big Short. It has my early vote for Best Picture. 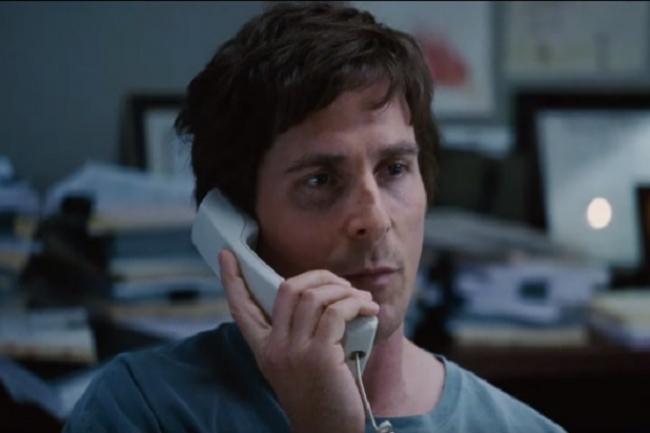 Christian Bale in The Big Short

At one point Christian Bale has the line, "It could be we're in a completely fraudulent system." It basically sums up our banking systems as portrayed in The Big Short. It is those simple descriptions that demonize banks and gives the film its villain. Every story needs one and who easier to hate than greedy rich people? Marisa Tomei states, "Saints don't live on Park Avenue."

Although the banks were as guilty as sin, a search online reveals the film makers chose to limit the blame mostly to the banks, when in fact they could also hold responsible Bill Clinton for repealing the Glass-Steagall Act of 1933, which had separated commercial and investment banking. The Federal Reserve raising interest rates the year before the bubble burst is another thing that contributed to it. The closest the movie gets to mentioning it is when Gosling narrates that Alan Greenspan, Chairman of the Federal Reserve, created the the entire problem but he never goes into any details.And while I am pointing the finger, some blame has to be laid at the feet of the people who received loans for homes whose mortgages they could not afford to pay.

With all that said, The Big Short tries hard to make a complicated subject understandable to those of us not working in financial institutions. Scott mentioned the asides and celebrities explaining things. All of that makes for an interesting and creative viewing but the subject is still just too damn boring to ever become interesting. Ryan Gosling even narrates that bankers and lawyers purposely make things complicated and use terms few understand, hoping to keep average Joes out of the loop.

The men who make themselves and their firms money are in fact just doing their job as investors. What makes them interesting is that they see numbers and not people. This is best exemplified by the loan men in Florida who brag/confess about their questionable money making process. The men depicted in this film determine their business success based on earnings without the slightest concern for how it will affect others. Does this make them bad guys? As Patrick wrote, it does if they lie, cheat or steal.

The Big Short has a great ensemble cast with plenty of witty lines and quips. However, I still did not enjoy it as much as my brothers. Perhaps it was because there was no one to truly root for or perhaps the subject was simply too dry and complicated to follow. Either way, I appreciate Adam McKay's effort but do not consider it quite the success my brothers wrote about.