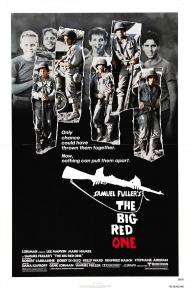 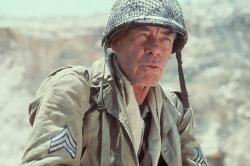 Lee Marvin in The Big Red One.

Before Band of Brothers, there was The Big Red One. Samuel Fuller wrote and directed this World War II movie based loosely on his own experiences and stories he heard about the war. The movie contains some truly memorable scenes but taken as a whole it's too episodic. It could play very well like the HBO miniseries Band of Brothers in that every 20 minutes or so the action switches location and centers on a different character.

Like Band of Brothers, The Big Red One covers several years of the war in Europe following a platoon of men as they battle in different countries like Algiers, Italy, France, Belgium and Germany. Band of Brothers owes much to Samuel Fuller. Both end at the discovery of a Jewish death camp.

The Big Red One centers on a Sergeant and 4 key members of his platoon. Private Zab is a writer who narrates the movie with such lines as, "We were more horny than hungry." And "You know how you smoke out a sniper? You send a guy out in the open and you see if he gets shot. They thought that one up at West Point." Private Griff is the company sharpshooter who can only kill men from a distance. He loses his nerve when he is close to them. One of the last scenes in the movie is him over coming that fear when he finds a Nazi hiding inside an oven used to cremate Jews. Vinci and Johnson, the other two Privates, have even less characterization than them. Johnson is a farm boy. Vinci is Italian.

The Big Red One does succeed in the many memorable moments that occur, sometimes for no apparent reason. At one point Sarge is in a German hospital and a gay Nazi doctor starts kissing him passionately. Marvin grabs him by the throat and says, "I can understand you being horny Fritz but you've got bad breath." Another scene that stuck with me from the first time I saw this movie, when I was in high school, is the one where Johnson and the Sergeant are delivering the French woman's baby. "How do you say push in French?" A nervous Johnson asks the Sergeant who tells him, "Poussez." Johnson anxiously then mispronounces the word and tells the woman, "Pussy, pussy, pussy." My best friend spend the next day at school saying "poussez" every chance he got. For cringe inducing, there is the part where a new guy in the platoon trips a mine and is worried that his penis is blown off. Sarge picks something bloody off the ground and shows it to the guy who asks, "Is that my cock?" Sarge responds, "No, it's one of your balls." He then throws it away.

The Big Red One would have worked great as a mini-series, but as a movie there is very little story arc. It follows a group of men as they experience war. There is plenty of fighting and the pace is well done. However, the characters are never developed and very little changes for these guys by the end of the movie. There is a bookend plot that has Sarge kill a German at the beginning of the movie and at the end, but it is not enough to solidify a movie whose plot is just fight, talk, fight, talk. The original cut of this movie ran four hours. The studio forced Fuller to cut it down to 116 minutes. This is the version that was shown in theaters in 1980 and on HBO shortly thereafter. I remember seeing it as a teenager and finding it very gritty and violent. In 2004, seven years after Fuller's death, a 160 minute restored version was compiled for a DVD release. It includes many scenes not shown in the original truncated version. The restored version is the one I watched for this review.

Eric mentioned several of the most memorable moments. The delivery of the French woman's baby brings life affirming joy and welcome levity to the horrors of war. The scene where the soldier gets one of his testicles blown off when a trip mine explodes is a bit predictable. It happens seconds after he was talking to the four main soldiers and telling them how they've earned a nickname because of their almost god-like ability to stay alive. New recruits have taken to calling them, “The Sergeant's Four Horsemen”. The D-Day Invasion is nicely done. In some ways it holds up better than the similar scene in Spielberg's overdone gore fest Saving Private Ryan.

It does seem a bit unrealistic that these same four soldiers and their grizzled sergeant (Lee Marvin was 54 at the time) stay together throughout the entire war. And they participate in nearly every major battle in the European campaign. But the story is told in an exciting manner that combines tense action with bursts of occasional humor.

Private Zab (Robert Carradine) plays the character based on writer/director Samuel Fuller. Fuller included several moments from his real life experiences in the war. The scene where Zab is playing basketball and spots another soldier reading his novel actually happened. Only in real life Fuller didn't even know that his book had been published. Another true incident happens during the storming of Omaha Beach. Zab, acting as a runner, informs the Colonel that they've broken through the German line. Samuel Fuller was awarded a medal for this brave action in real life.

One memorable scene has the soldiers of the 1st Squad attacking some German soldiers that are using an insane asylum for its headquarters. It includes a scene in the asylum's dining hall where a large painting of the Last Supper is prominently displayed on one wall. The battle occurs during a meal. The symbolism is none too subtle.

Mark Hamill was fresh off his Star Wars' success when he played Private Griff. Another familiar face at the time was that of Kelly Ward. He plays farm boy Private Johnson. He is most famous for his role as Putzie in the hugely popular movie musical Grease.

I see Eric's point that the story lacks any real arc. It is a series of set pieces, involving the same soldiers, that tells the story of WWII, but truth be told these soldiers are all a bit interchangeable. There's a subplot dealing with Lee Marvin's German counterpart. He echoes many of the same sentiments to his soldiers that Marvin's (unnamed) Sergeant tells his own men, such as explaining the difference between killing and murdering. Their paths cross in the final scene that seems a bit contrived as it wraps up the war a little too neatly.

The Big Red One isn't a perfect war movie but it does hold up fairly well. The cast is good and the battle scenes are terrific. It is perhaps overly ambitious in its zeal to encompass so much of the war but it is still a highly entertaining war picture.