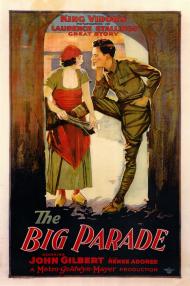 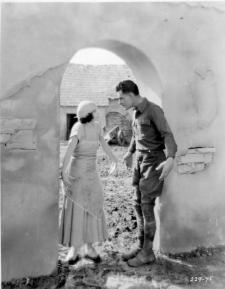 The Big Parade, released just seven years after the armistice that ended the First World War, captured the imagination of the country with its potent combination of realism and romanticized nostalgia. It would become the highest grossing movie of the 1920’s and the second highest grossing silent movie after Griffith’s landmark Birth of a Nation. They would remain at the pinnacle until a little movie called Gone with the Wind would obliterate all previous box office records in 1939. Although both Wings and All Quiet on the Western Front are better remembered today, The Big Parade was far more popular during its time. At one Manhattan movie theater it ran for an astounding 96 consecutive weeks.

The movie stars John Gilbert as the spoiled son of a wealthy American family who gets caught up in the winds of war. He leaves behind the pretty girl next door and soon finds himself in the army marching across the French countryside. Many of the day to day trials and hardships of military life are shown. One day Gilbert rigs up an outdoor shower and as two of his platoon mates are showering he spots a lone French girl (played brilliantly by Renée Adorée) watching them in amusement. Thus begins a fateful wartime romance.

The final half hour or so has some well staged and exciting battle scenes of trench warfare. The most memorable scene, however, and one that you may be familiar with even if you have never heard of this movie, takes place when Gilbert’s platoon is called up to the front lines and he must say goodbye - for now at least - to his French lover. King Vidor masterfully directed this segment and it is one of the greatest 10 minutes in all of silent film.

First we see the lovers searching desperately for each other as the streets of the quaint French village fill with crowds of soldiers gathering and civilians rushing about saying goodbye. Finally the lovers spot each other, run to each other and exchange many passionate kisses. Tearfully they must say goodbye. Gilbert gets on a truck. She runs alongside, desperately, pleading with him not to go. She grabs his leg, then boot, then a chain hanging from the truck, until finally she lets go and collapses in the dust as dozens of soldiers pass her by without a glance. Vidor then shows a long shot of the big parade of soldiers disappearing into the distance. Then the final shot of the young peasant girl, still on her knees in the middle of the dirt road, only now she is all alone.

John Gilbert was a bigger star even than Rudolph Valentino in 1925. He was the undisputed king of the box office and would soon team with Greta Garbo and achieve even greater heights of success. We will never know if Valentino would have made the transition to the talkies because of his untimely death in 1926. Gilbert, however, had one of the most spectacular falls from the heavens of any great movie star. His high-pitched, somewhat nasally speaking voice did not fit his image. He would make only one memorable talking picture, Queen Christina in 1933 at the insistence of his old costar and one time lover, Greta Garbo. He died of a heart attack in 1936 at the age of 38.

The Big Parade represents a big part of his celluloid legacy. 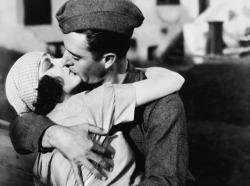 Renee Adoree and John Gilbert in The Big Parade

I was very much reminded of All Quiet on the Western Front during the early scenes of James getting caught up in the patriotic fervor. A title card explains, “What a thing is patriotism! We go for years not knowing we have it. Suddenly - Martial music!... Native flags!... Friends cheer!... and it becomes life's greatest emotion!” Although that line was written almost a century ago, is that not how so many of us reacted after the Twin Towers were destroyed in 2001?

The Big Parade starts as a comedy with such light moments as when James tries to cut the near petrified cake sent to him by his girlfriend back home. The best is the one Patrick mentioned, when James rigs the shower up outside and the French girl catches his friends showering together in the all-together. James and the French girl then take a walk where the language barrier becomes apparent. Gilbert has this little line nugget to say to her, “French is Greek to me.”

The film then becomes a romantic comedy with James trying to get the attention of the French girl. They steal a kiss in front of her home and in the wine cellar. His friends meanwhile steal wine from that cellar and get inebriated. This gets James into trouble, which leads to a big street fight with his drunken friends “helping” him and of course another kiss from the French girl. James gets a letter from his girl and we wonder where his feelings truly lie.

Comedic antics with his buddies continue as does the romantic posturing with the French girl until the war finally becomes a reality and the men go to arms. This is the scene of chaos and frustration that Patrick so highly praised. How amazing is the visual of film that even without sound we know what emotions are playing out. We see them searching and yelling for each other amongst the frantically moving crowd. So much is going on around them but they only have eyes for each other. It gets a bit melodramatic with her hanging onto the back of the truck, but it is truly as good as Patrick wrote.

The film then becomes an all-out dramatic war film with James and his buddies in the big parade to the front. Here is where I wished there was sound. In one scene James’s company marches through the woods looking for hidden Germans while getting shot at. To feel what they are feeling we really need the sounds of the quiet woods broken by a whizzing bullet or sudden explosion from a cannon shell. The scenes of James listening for his buddy Slim from the foxhole on the battle field lost some impact without us hearing what he heard. Although filmed as best as it could be filmed for the times, the scary sounds of battle would have helped greatly in experiencing those scenes with James.

Not only did John Gilbert die at an early age, but he was even preceded in death by some of his co-stars. Renee Adoree died of tuberculosis in1933, at the age of 35. Karl Dane who played James’s buddy Slim died the following year at age 47. It was a suicide by gunshot. Neither ever again found the kind of fame they did with this movie.

The Big Parade is the greatest silent war film ever made. Even though it would have benefitted from dialogue, better sound effects and a bit less ham, it still emotionally engages you. It may not have made as much money as Birth of a Nation but it is far more entertaining to watch. 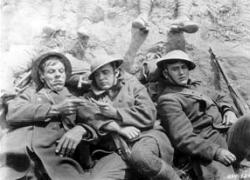 The talkies were still a few years away in 1925, but the sophistication and success of The Big Parade proves that Hollywood and audiences were ready for them. The acting is natural, the plot and characters follow an arc and the editing and camera movements are all quite modern. You could dub on dialogue and sound effects, remove the title cards and have a movie that could probably fool some into thinking  it was a talkie all along.

I agree with Eric that the sounds of war would have helped the battle scenes. Theater owners of the time agreed also. The Astor theatre in New York City used eighteen men with bugles and wagons filled with iron to create sound effects to replicate the experience of actual battle. Vidor used sound during filming as well. During the relentless march through the forest, he employed a bass drum and forced the actors to march in time with its beating.

One of the more unusual aspects of the film when it was released was that it focused on a trio of enlisted men rather than the officer class. Gilbert's character is from an affluent family, but he's not an officer and he's soon best friends with two men who he would never meet socially in civilian life. As Patrick wrote, this was just 7 years after the Great War and his story must have resonated with audiences of the time. Even today though, nearly 90 years after its release, this movie still remains relatable.

Despite a typically happy Hollywood ending, the film doesn't skimp on showing the cost of war. Even the survivors don't escape its effects unscathed. As Eric wrote, this is a movie that starts as a light hearted comedy, but ends as a drama.

Eric mentioned some ham and there are a few moments of overcooked pork. Claire McDowell, who plays Gilbert's mother, is the most guilty of overacting. For the most part though, the acting is top notch. Gilbert and his two friends have a very natural style.

For the most part it is the silent comedies that have held up better than the dramas. The Big Parade however, remains nearly as entertaining today as it was when it was released.