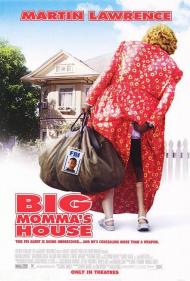 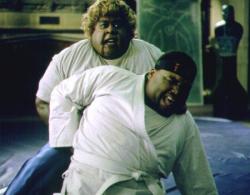 First of all there is not one original scene in Big Momma's House. This is pure formula, part buddy movie, part chick flick with an overworked mistaken identity/cross dressing theme. Still this film manages to offer a decent amount of chuckles. Due almost entirely to Martin Lawrence who puts so much infectious glee into the character of Big Momma that 'she' becomes another person entirely; like Hoffman in Tootsie and Williams in Mrs. Doubtfire.

He plays basketball, attends a self defense class for old ladies and testifies in church. The fact that Lawrence takes these played out situations, makes them funny, and then imbues them with real emotion is rather remarkable.

One line worth repeating comes in the final scene. Martin's character (no longer in drag) must convince Nia Long's character, in front of the entire church congregation, that he should be forgiven for his deception. He starts with 'Doesn't the bible say to be yourself'.

Some Like It Hot, Tootsie, Victor/Victoria and Mrs. Doubtfire all did the cross dressing bit a whole lot better than Big Momma's House. The reason? They had a plot. Big Momma's House just has situations for Martin Lawrence to ham it up.

Lawrence plays an FBI agent who goes undercover to find an escaped convict. He ends up in a woman's defense class for no other reason than an attempt at a few cheap laughs you see coming a mile away. He plays basketball, like Robin Williams played soccer in Mrs. Doubtfire. He ends up in bed with a beautiful girl just like Jack Lemmon did with Marilyn Monroe in Some Like It Hot. As Patrick wrote, there is little originality here.

I also agree with Patrick that the one bright spot this movie has is Martin Lawrence. He is a good actor and a great comedian. His performance as Big Momma is the only original thing in this otherwise worn out genre.  Lawrence gets a few cheap laughs.  When he, in drag, first meets Nia Long, she says,"I thought you may forgotten all about me."  and Lawrence responds. "Shut your mouth, child. Oh, Big Momma could never forget that ass..."

Big Momma's House does have one great line.  Maybe you have to be married for a few years to appreciate it, but I crack up when Giamatti says, "I'm a married man, I'm not used to this much attention." 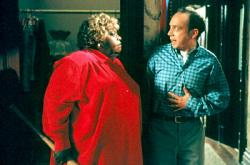 Who would have guessed that this movie would feature so many future Oscar nominees? As unbelievable as it sounds, three of its supporting players would go on to be nominated for an Academy Award and one of them would actually win it. An unlikely pedigree for such a lowbrow movie.

A surprisingly thin Paul Giamatti (nominated for Cinderella Man), plays the thankless part of Lawrence's partner in the film, although somehow I doubt he uses it on his resume. Terrence Howard (nominated for Hustle & Flow) plays the villain. He probably only gets about 10 minutes of screentime, but he manages to be appropriately evil and badass, right up until Big Momma whoops his ass. And Octavia Spencer (won for The Help) has a tiny part as a member of Big Momma's circle of friends.

I know that this is just a silly comedy, seemingly aimed at children or the feeble minded, but I question how anyone could mistake Lawrence for Big Momma. Not that the makeup isn't good. It's actually quite good and he is a much more believable woman than Jack Lemmon, Tony Curtis, or even Robin Williams in their cross-dressing films. No, the problem is that he only looks vaguely similar to the real Big Momma and he behaves almost nothing like her. This is especially noticeable when they're standing right next to each other. How could any of her close friends not notice? Why not just have Lawrence play both parts?

Both Eric and Patrick were more impressed with Lawrence's performance than I was. I suppose he should get kudos for throwing himself into the part with such abandon, but I can't honestly say I thought he did anything special with the role.

The humor is all exaggerated and lowest common denominator. For anyone older than 12 (or sober) there's really not very much to laugh at. Okay, maybe there's one or two chuckles, but that's about it.

Somehow they managed to produce two sequels from this one-joke, Saturday Night Live-type sketch of a movie. I can't say I'm in any hurry to rush out and watch them.