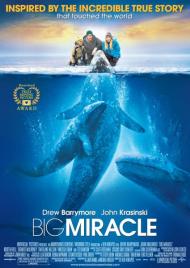 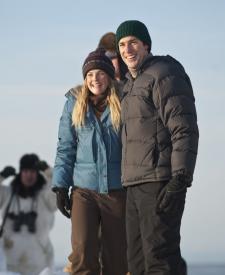 On the surface, Big Miracle is the story of the rescue of three trapped whales. Underneath is a story of humanity at its best. Although each have their own motivation, a diverse group of people come together for a singular purpose.

While doing a routine story in the field, or in this case the frozen tundra of Barrow, Alaska, rookie reporter Adam Carlson comes upon three whales trapped under the ice with only a single hole in which to breath. His story gets picked up by NBC and soon the lower 48 become fascinated by the whales plight. Barrow soon finds itself flooded with reporters.

The story creates interest for different people for different reasons. Adam sees this as his chance for promotion. His ex-girlfriend Rachel, a Greenpeace activist rides into town on her high horse. She breaks into self righteous rants but you cannot dispute her passion. An oil tycoon loans the national guard an ice breaking barge so as to create good PR for his company. The Inuit want to "harvest" the whales before deciding to help. Two men from Minnesota fly to Alaska at their own expense to provide something they recently invented that will keep the hole from freezing over.

A White House employee Kelly, is made the go between the Alaskan national guard and President Reagan. She calls the Colonel, who will fly one of the helicopters that will pull the barge. They take a liking to each other right away. However, once the barge breaks down they end up needing help from a Russian ice breaker. This is 1988, and getting help from the Russians during the Cold War was national news and creates a heated debate in the film between Kelly and Rachel in which Rachel gets very bitchy.

The characters depicted are based on real people with changed names. Rachel is based on real life Greenpeace activist Cindy Lowry, who supposedly actually said the line, "God, this is when you wish you were Superman and could just go in and scoop them out of there." as spoken in the film by Barrymore. My favorite line of hers is when she looks at an attractive out of state female reporter that Adam likes and comments, "I like her makeup. I am pretty sure it was tested on animals."

Big Miracle is, for the most part, a true story. You can go on-line and find pics and video of the actual rescue attempts. They look very much like what is depicted in the film. However, there are contradictory stories of the outcome. The film ends with the whales surfacing in the open sea as the significant cast members cheer. An article on Greenpeace's website pats them self on the back for saving the whales. However, according to an article for The Los Angeles Times, "Dave Withrow, who works with the polar ecosystems program at the Alaska Fisheries Science Center, told the Los Angeles Times. "None of us actually saw the whales swim through,..People want to know if they actually made it. We don't know."

There are other fascinating stories that came out of this one. The end of the film informs us that the Colonel and Kelly did in fact fall in love and get married. What it does not state is that the Colonel would die in a helicopter crash four years later. Kelly would start an organization called TAPS, that helps the family's of deceased military personal. The oil baron that Ted Danson portrays in the movie is based on Bill Allen, who later went to prison for bribing Alaskan officials. Also, if you look closely at one of the many actual news reports from the time used in the film, you will see a young news caster who would later become Alaska's governor and vice President nominee under John McCain.

Big Miracle is not about whether or not the whales were saved. It is about the sheer beauty of people with different ideals and motives coming together for a common goal. Humanity, no matter how screwed up and different in their thinking, politics and ideas, can in fact work together when it wants to.  Now that is a miracle.