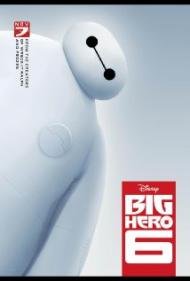 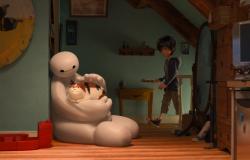 Given how advanced computer animation has developed and continues to develop, and considering that Walt Disney, the king of animation, now owns the film rights to nearly all of the Marvel Universe, it's a bit surprising that this is the first big budget Marvel superhero animated film to be produced. Perhaps because it's something of an experiment, they chose to do it with a more obscure title like Big Hero 6.

The story is based only loosely on the comic book group. For instance, in the comic, Baymax (the lovable inflatable robot featured on all the posters and marketing material) is a synthetic bodyguard capable of synthforming into a dragon, created by 13 year old computer genius Hiro using the brain engrams of his dead father. In the film, Hiro is still a teen prodigy, but Baymax is built by his older brother as a medical robot. Hiro, who graduated high-school early, decides to go to the same university as his older brother where he hopes to join the robotic department which his brother and an eccentric group of students inhabit. At a demonstration by Hiro of his microbots, there is a fire and someone is killed. This kick starts the plot into motion when later a super-villain emerges using the microbot technology and Hiro gathers his fellow robotic students together to form a superhero team.

Although this is a group of superheroes, it's Baymax who steals the show. Voiced by Scott Adsit (most famous for playing Pete Hornberger on 30 Rock), Baymax is an innocent who starts off as purely a medical robot, but thanks to enhancements by Hiro, he becomes a flying, fighting machine, but one who retains his sweet nature. His chubby, inflatable body makes him seem more like a cuddly toy than a killer robot. The emotion generated at the film's climax is down entirely to his presence.

The central mystery, which is merely identifying the villain, is the film's weakest aspect. It's pretty obvious who he is. As in a lot of mysteries, you simply have to look for the minor character played by (or voiced by in this case) a big name actor.

In the original comic book, the superhero team was based in Tokyo. For the film they moved the story to the fictional city of San Fransokyo, which is a combination of Tokyo and San Francisco. This internationalism is mirrored in the voice cast, which is made up of Asian, Caucasian, African American, and Hispanic actors. There are several recognizable voices in the cast including T.J. Miller who also provided a voice in How to Train Your Dragon 2, another of 2014's Oscar nominated animated films. However, it is Adsit who is the only real standout. He's particularly good when he plays "drunk", which is what happens to Baymax when his battery runs low.

The action is quite good and there are several big battle scenes that must have looked even better up on the big screen. Unfortunately, because the tone is kept light, there's never much of a true sense of danger. And perhaps that's the film's biggest problem. Although in Japan, where the original story was set, they have no problem producing animation aimed at adults, here in America, any animation is treated as a cartoon and as something aimed at children.

As with its live-action counterparts, this one comes complete with a post-credits scene that sets up a sequel. It likewise includes an animated cameo by Stan Lee. So long as Baymax returns for that sequel, I'll happily be in line to see it. 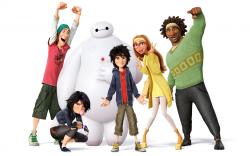 Big Hero 6 is one of the best animated films of the year, but nowhere near as good as The Lego Movie, which was a breath of animated fresh air. It took a tried and true toy and exploited it to an amazing level of imaginative fun and even a lesson or two. The fact that it was not even nominated for an Academy Award for best animation lowers the Academy's credentials in my book.

You will find plenty of excitement here with little time passing before the next action piece. I liked the chase through the city with the gang of nerds packed into the Scooby Doo like van. Wasabi stops at every light and uses his turning signal even though they are being chased by the powerful bad guy. Fred steals many scenes as the stoner acting son of neglectful millionaires. Think Harry Osborne by way of Shaggy. His underwear habit explanation is disgustingly funny.

The idea of making the setting San Fransokyo is a bit disturbing to a student of World War II. How did that happen? Did the Japanese attack and conquer the continental United States? It makes for a mixture of architecture in the background but it truly adds little to the entertainment value of the film, other than creating the need for an explanation that never comes.

Baymax is not only the best character in the film, as Scott already noted, but the most original. He is a balloon capable of providing humor, excitement and comfort. His programming to never harm a person may challenge the writers as it may cause them to rethink some action scenes. I look forward to seeing him in the sequel.

As good as this movie is, it contains some very worn out plot devices. I was having flash backs to the "Speed Racer" cartoon when we meet Hiro and his older brother who inspires Hiro to follow in his footsteps. This group of eccentric superheroes living in a science fiction world chasing after an object is a bit like The Guardians of the Galaxy (2014). The circular teleportation device was practically a direct copy of the one from Stargate (1992).

As my brother Patrick wrote in his review for The Boxtrolls (2014), you have to seek out foreign animated films for something truly unique. Still, there is plenty to enjoy in this fast paced animated piece of borrowed entertainment.

Baymax and Tadashi in Big Hero 6.

I wasn't bothered by San Fransokyo. It's a fictional city in a fictional universe in a cartoon. I was bothered by the complete lack of originality in the plot. Baymax may be a fairly original character but the plot to Big Hero 6 is anything but. Like virtually every other big budget animated American movie it tells the same basic story. An underdog orphan (with amazing talents) overcomes adversity and with the help of a lovable sidekick defeats the evil super villain. Even the action scenes are generic – ooh look at the pretty colors moving across the screen. If you've seen one you've seen em all. Seriously Eric and Scott, you were entertained by this derivative drivel? I didn't find much to enjoy about it and I didn't think it was all that fast paced either. But as I've said before, I'm no fan of modern American animation. In fact, it wouldn't bother me one bit if I never sat through another bloated CGI carbon copy cartoon passing itself off as a feature film.

Kids will probably enjoy it.