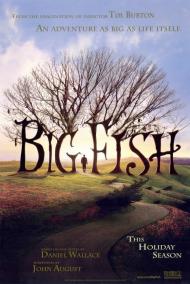 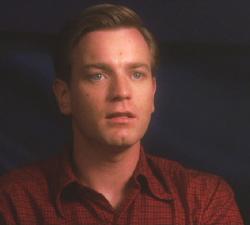 Big Fish is the very first Tim Burton movie that I actually enjoyed. It takes an old story, that of a son trying to reconcile with his dying father, and tells it with a new twist, using tall tales to explore life and how we chose to live it. The cast all turn in fine performances, the visuals, as you would expect in a Burton film, are excellent, and the emotional moments manage to side step the twin puddles of melodrama and sappiness.

Billy Crudup plays William Bloom, son to Edward Bloom whose is played by Albert Finney as an old man, and Ewan McGregor in flashbacks. William is embarrassed by and tired of his father's long-winded and fanciful tales. When his father dominates his wedding reception with stories of his past, they get into an argument that results in them not speaking to each other for three years. When William's mother (the still beautiful Jessica Lange), calls to tell him that his father is dying, William returns to his father's bedside in an attempt to make peace with him.

Edward relates his life story to his son and his daughter in-law in a series of flashbacks. All of his stories are exaggerated and colorful. They involve witches, giants, secret military assignments, and other assorted odd characters and locations. By looking through the stories and learning some truths, William begins to understand his father.

Throughout all the tall tales and Burton's trademark visuals, what keeps the movie grounded are the performances of the cast, particularly Albert Finney. He captures the spirit of a man who sees life through his own warped lenses perfectly. McGregor also does well as the younger Edward, playing a modern Pecos Bill/Paul Bunyan. He's the idealized version of Edward, and how Edward sees himself.

Funny and emotional, Big Fish accomplished what I didn't think was possible. I actually enjoyed a Tim Burton film. By making the humanity of his characters the most important aspect, without weakening the visuals, he has created his best work. 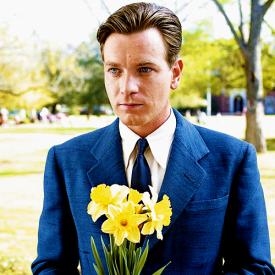 Like Scott I have never been a big fan of Tim Burton movies, with the exception of a few of his early pictures like Pee-wee's Big Adventure, Beetlejuice and Edward Scissorhands. I can now add Big Fish to that short list. This movie works on many different levels. It is colorful and visually stunning, as is the director's trademark, but it is also a classic fable. It teaches life lessons while entertaining and it also forces us to use our imagination in a way few movies do. And, as Scott said, it features a top-notch cast, all of whom inhabit their characters with infectious enthusiasm. Big Fish also manages to dangle a few laughs and land some genuine emotion.

The story is structured in such a clever way that the viewer discovers the truth behind the tall tales of Old Edward Bloom at the same time that his son William discovers them. For even his most outlandish stories contain some basic element of truth. William feels, quite accurately, that his father uses his stories as a way of keeping him, and the rest of the world for that matter, at arms length. This makes the ending even more touching and poignant.

Big Fish is a wonderful fantasy that contains some memorable images and mythical imagery. It is also an insightful look at the relationships between fathers and sons. Every son is curious about his father's life before he was born, but can a son ever really know his father? The soul of Big Fish is that he can. 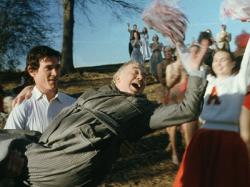 I was emotionally overwhelmed by this movie. So much so that I am embarrassed to give details. As a father and a son, I am this movie's target audience. I have not been this moved by a movie in years.

As I walked out of Big Fish I recalled stories our father told us when we were young. I believed them all at the time. As a young man I learned the reality of my father's childhood. His stories, exaggerated by time, now make complete sense. After watching this movie I had an immense desire to talk to him.

The last few scenes of Big Fish are absolutely perfect. A man whose life was utterly normal passes onto his son his greatest gift, story telling. Although nearly every story is an untruth, the son finally recognizes that it is in the telling of the stories that gave his father a fulfilled life. The scene where Crudup takes over the story telling brought tears to my eyes. It is such a powerful moment of clarity and understanding.

Although this movie may not appeal to everyone, it hit me in the heart like a sledgehammer. Hours after seeing it, I can still not get it out of my mind. The more I think about this movie the more I get out of it.