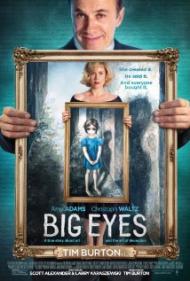 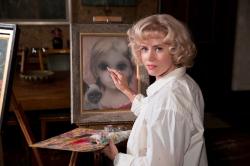 Big Eyes is directed by Tim Burton, but for once the quirky director keeps his quirkiness in check. Perhaps this is due in part to the fact that the film is based on a true story. Although like all Hollywood films, based is the key word. It's an uneven film that fails to find a good mix between the drama and the comedy.

Amy Adams stars as real life artist Margaret Keane. After she marries wannabe artist Walter (Waltz), he begins to take credit for her series of paintings that feature children with big eyes after convincing her that art by women doesn't sell. The paintings become immensely popular and Margaret starts to chafe under her domineering husband's control. This leads eventually to a court case where Margaret hopes to legally prove that she is indeed the true artist.

As usual, Adams does a terrific job. The problems with her character aren't her fault. She takes a weak and mousey woman and keeps you on her side. However, the script tries too hard to make her the victim. We are repeatedly told how difficult it was for women in the 1950s and 1960s and are shown how Walter manipulated her. The script wants you to feel that she's 90% victim/10% culpable. However, I never really bought into that. Although she may have been railroaded into the setup, she certainly went along with it for long enough and had no problem spending the money as it was earned under the deceptive circumstances. Still, it is almost entirely due to Adams' acting skill that we remain invested in the outcome.

Waltz, on the other hand, hams it up as Walter. His character is supposed to be charming and smooth. He's described as a marketing genius and a consummate salesmen, but he's portrayed as inept and smarmy. All of the success the duo find in their artwork seems to happen via dumb luck rather than because of anything he does. In fact, their success seems to happen in spite of him. His behavior in the final trial is played strictly for laughs as the comedy becomes very broad indeed.

The film toys with the concept of what makes something art. Terence Stamp plays a New York Times art critic who snubs his nose at the popular paintings and Jason Schwartzman plays a gallery owner who has no interest in anything as common as art that is actually representative of something and not abstract. However, Burton seems to hold back from making any judgments on Keane's work. Is it art or is it kitsch? It is left up to the viewer to decide.

Perhaps the film's biggest problem is that for a drama, it's not really dramatic enough. And likewise the comedy isn't funny enough and when the jokes are inserted they don't blend easily. The result is a tame and only mildly entertaining film.

Amy Adams is indeed terrific as real life painter Margaret Keane. Her journey from passive housewife to celebrated artist is an entertaining one. I enjoyed Big Eyes more than Scott did and I had no problem with its mix of drama and comedy. It is neither terribly dramatic nor the stuff of high comedy. The balance never tips too far in either direction. The courtroom scene Scott mentioned makes Walter Keane look like a fool, but from what I've read that was pretty much how he behaved. As in the movie, in real life the judge ordered the two of them to paint a picture in front of the jury in an alloted one hour time period.

I also disagree that the film tries to portray Margaret as purely a victim. On the contrary, the script shows her willingly accepting her share of the blame in lying to the public about her massively popular paintings. In particular she suffers guilt in regards to the lie she tells her daughter. It's only after she attempts to correct the lie, and is opposed by Walter, that she places blame on him. And rightly so. If anything it takes her far too long to finally stand up and assert herself. But in real life it wasn't until 1970 -six years after her divorce from Walter Keane- that she made her now famous confession on the radio.

I do agree that Christoph Waltz overcooks his performance as the movie's villain. Just what Margaret sees in him is beyond me. But then as a single mother in suburban 1950's America there would have been plenty of pressure on her to find a new man. I remember seeing copies of her paintings as a child but I had no idea of the true story behind them, or of just how incredibly popular her work was. As this movie points out, movie stars such as Joan Crawford and Natalie Wood both commissioned Keane to paint their portraits.

The question of what is and what isn't “Art” is a fascinating one and you will be hard pressed to find any two people who agree on the answer. What is indisputable is that fact that her work hangs in galleries and private collections around the world today and individual pieces have sold for thousands of dollars.

Terence Stamp steals a few scenes as real life New York Times art critic and historian John Canaday. He is definitely of the opinion that Margaret's work is kitsch. As he explains it, “Art should elevate, not pander.” Andy Warhol, on the other hand took a more populist approach. The movie begins with a quote of his saying, “I think what Keane has done is just terrific. It has to be good. If it were bad, so many people wouldn't like it.”

It was refreshing seeing a film by Tim Burton that features neither Johnny Depp nor Helena Bonham Carter. Big Eyes is my favorite film of his since Big Fish in 2003. From now on he should only make movies with the word Big in the title.

The revelation that a person took credit for another’s artistic work is an interesting enough of a news story but not so much as a scripted film. The fact that the truth was decided by a judgment to paint is also a fascinating story. As a whole though, Big Eyes lacks any real depth. Both leads are one dimensional. Walter is the cold selfish villain and Margaret the intended innocent victim.

Walter was quite possibly a pathological liar. To the day he died he was still claiming to have been the artist who painted the big eyed children. Like Patrick, I read that he was quite a showman. Without Walter, we would likely have never heard of Margaret Keane. All of the work was hers but he was the salesman who pushed and put her work into the pop culture. Only one brief line during the court scene gives any amount of credit for his role in her success. Think of Sonny and Cher. She was the talent but he put her on stage.

Even though they disagree, I think both of my brothers are right about how the script portrays Margaret. It tries way too hard to make Margaret the victim. I get that the 1950s and 1960s were a different time in sexism and Walter was very manipulative but one important aspect is missed. Even though her husband took credit for her paintings, I am sure she had many moments of pride about her work becoming extremely popular but we are never shown any. The script constantly shows Margaret as nearly a tortured slave, forced to paint in a private room as if it were a prison she could not allow her own daughter to enter. As Patrick noted, she went along with the lie, lived in a nice home and had the financial means to up and move to Hawaii on a moments notice.

As far as what defines art, I will refer to a scene in the film where an intoxicated woman sees one of Keane’s paintings on the way to the ladies room. “Look at that child. She is so sad.” She says staring at it close up. Art is personal and different work speaks to different people. French artist Edgar Degas once said, "Art is not what you see, but what you make others see." My favorite art quote is by Oscar Wilde, "No great artist ever sees things as they really are. If he did he would cease to be an artist."