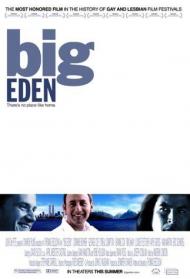 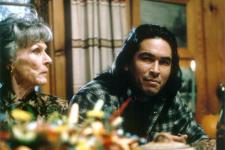 Nan Martin as the Widow Thayer and Eric Schweig as Pike Dexter.

This utterly charming movie never fails to put a smile on my face for hours. It is a wonderful romantic comedy with a gay spin. It has a rural setting, the fictional town of Big Eden in the mountains of northwestern Montana. What is most remarkable and refreshing about it is that the gay characters are completely accepted by the straight characters. While this may seem idealistic it is done in such a natural way that it makes you believe the town of Big Eden could exist somewhere in the heartland of America.

Henry Hart is a single artist living in New York City. On the eve of his first big exhibit, he learns that his grandfather has had a stroke and is in the hospital. Henry returns to his hometown for his first extended visit since high school. Coincidentally his best friend from childhood, Dean Stewart, has also recently returned to Big Eden having just gotten divorced and with his two young sons in tow. Henry was, of course, madly in love with his friend and has spent his life comparing every man he dated with his romantic image of Dean.

Pike Dexter was also a classmate of Henry and Dean’s. He is a shy Native American who owns the local general store. As Henry has pined for Dean so Pike has pined for Henry. I won’t give away how the story plays out but it is funny, touching, and romantic. Eric Schweig steals the movie as Pike and in doing so has created one of my all-time favorite movie characters.

Big Eden has some wonderful supporting characters. There is the matchmaking, gossiping Widow Thayer. At first she invites a group of women over for Henry to meet. After learning he is gay she doesn’t bat an eye, but says simply, “So why doesn’t he say something already?” She then proceeds to gather a group of gay men for Henry to meet. Pike’s best friend and confidant Jim Soams is another memorable person in Big Eden. He just wants Pike to be happy and some of the funniest moments are when Jim and the group of men who hang out at the general store get caught up in helping Pike land Henry.

Big Eden is a unique movie and a bit hard to describe, but I’ll try my best. Start with a gay On Golden Pond mix in Brokeback Mountain, only a happy version, Brokeback Mountain if it had been directed by Frank Capra, finally throw in Louise Fletcher and stir. At any rate the final elixir is pure magic. 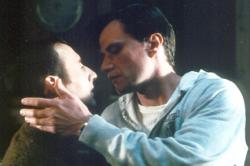 Patrick recently informed me that out of all the homosexual themed movies he has ever watched, Big Eden was his favorite. I had not only never seen Big Eden, but never even heard of it prior to Patrick’s review that I had long since forgotten about. I was curious to see what made this one so special to him.

My opinion of this movie is not the same as Patrick’s but I did see the charm in a movie where “…the gay characters are completely accepted by the straight characters.” Big Eden even goes well beyond acceptance. The apparently straight country men, who hang out at Pike’s store, as well as some old women, actively encourage him to pursue Henry. I did not find much humor here beyond them.

The beautifully scenic, fictional town of Big Eden, Montana is truly a paradise. It is made all the more attractive by its friendly, caring populace. Not only is sexuality a non-issue, these people go out of their way to help each other out. They all attend the same church and participate in every public gathering. This is how we all think, thanks in no small part to Hollywood movies, all small American towns are. While this town is fictional, one day Big Edens will likely exist all over the heartland of America.

As Patrick wrote, Henry is lovelorn and confused when he reconnects with his high school best friend Dean, whom he had a crush on. Dean loves Henry in a hetero way. In fact, he loves him so much that he is willing to consider a gay relationship with him, so that they may be together. They begin to share a passionate kiss that goes nowhere. Dean whispers to Henry, “I can’t. I am so sorry. I want to. I can’t.” Henry understands and tells Dean, “Stop saying that already.” Alas, Dean is straight and thus a friendship is all they can have. It is news to both of them. The character of Dean represents the difference between men who love each other and men who “love” each other.

Eric Schweig is fine as Pike but I did not find that he stole the movie. He spends a great amount of film time avoiding eye contact with Henry, afraid he will reveal his true feelings. At one point he stands mere inches behind Henry, staring longingly at the back of Henry’s head. As soon as Henry turns, Pike puts on an act and creates an excuse to leave. I can see how Patrick could find that romantic but I found it tedious. Pike staring in frustration at Henry became frustrating to watch. I kept thinking, “Pike, shit or get off the toilet.”

Every love story has similar rules and other than Dean’s story line, this one follows them all. We know where the story is headed but I found this movie truly dropped the ball at the end. After so much dancing around each other, I wanted a much bigger climax between Pike and Henry. After waiting so long, through a moderately paced story, there should have been a more emotional confrontation between Pike and Henry. Big Eden has great intentions but unsatisfactory follow through.

I can see how a movie about complete acceptance would appeal to Patrick. He is a sentimental person who adores old people and dark haired ethnic men. I however, was not so taken by it. I liked the people of Big Eden but the movie unfolds too slowly and seems to run a bit long. For the record, my favorite movie with a gay theme is Patrick 1.5 (2008). Interestingly enough, it also features lots of country music. Hmmm?