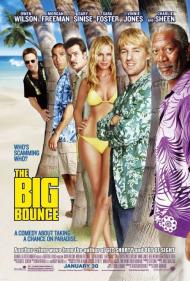 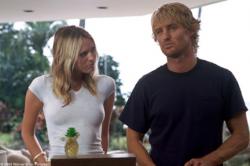 Sara Foster and Owen Wilson in The Big Bounce.

Likable characters and snappy dialogue in The Big Bounce are undercut by the lack of tension and an unsurprising, surprise ending. The end result is a very lighthearted scam within a scam movie set on the very beautiful North Shore of Oahu, Hawaii. It's enjoyable enough, but is easily one of those movies that would be just as entertaining on DVD or HBO.

Owen Wilson plays thief/drifter Jack Ryan. When one day he gets into a fight with the foreman of the construction site he's workinig on, Jack is warned to leave the islands by Ray Ritchie (Gary Sinise), the local mobster and owner of the construction site. Jack decides to stay, despite the warning, after he sees and lusts after Ritchie's mistress, the very hot Nancy (former-model Sara Foster). The District Judge (Morgan Freeman) likes Jack's style, and defiance of Ritchie, enough to offer Jack a job at the resort he owns.

After Ritchie leaves on a business trip, Jack and Nancy meet and are soon planning a way to steal the $200,000 that Ritchie keeps in his safe. Since this movie is based on an Elmore Leonard novel, and the since the tag line for this movie is, “Who's Scamming Who?" you can probably guess that not everything is as it seems. While the rest of the movie is all about who's lying to whom, it's really not that hard to figure out, or to see how it's all going to end.

As Jack, Wilson brings his likable, laid back charm, which serves him so well in nearly all his movies. Here though, it hurts rather than helps. His character lacks any sense of edge or darkness. He's so laid back about everything, that all tension is lost. If he's not worried, why should the audience be? The rest of the characters are also so likable that even when you find out “Who's scamming who", it's difficult to dislike the traitors. Only Sinise seems capable of bringing any sense of danger to the film, and his part is only slightly larger than the very small part by Bebe Neuwirth as his scene-stealing wife.

Too lighthearted for its own good, The Big Bounce does exactly what its title suggests. It bounces off you, without leaving an impact. 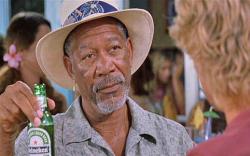 Maybe someday they'll make a decent movie adaptation of this Elmore Leonard novel. The author hated the 1969 version starring Ryan O'Neal and Leigh Taylor-Young and he didn't like this 2004 remake either. I can understand why since, despite the talented cast, this movie is a bit of a mess.

As Scott said, and as you would expect from the mind of Leonard, the characters are interesting and likable enough and there is some decent dialogue that sounds like how people actually talk. When Nancy tells Jack that his bungalow is depressing, he replies, “That's one of the things I like about it is how depressing it is. It's like where dreams go to die.”

But the “who's scamming who” plot is predictable and the editing is awful. Apparently several scenes, and shots within scenes, were left on the cutting room floor during a last minute trim job to ensure a PG-13 rating. This resulted in some of the clips shown in the trailer not appearing in the finished movie. They even overdubbed some “F” bombs with less vulgar euphemisms where you can clearly tell what word the actor was actually saying.

The climax of this 88 minute movie feels rushed and the action jumps around jarringly. You get the definite impression that something is missing. Not that it would have been great anyway but the slash job they did on the final print ruined any chance it had of connecting with audiences.

Which is a shame since The Big Bounce has promise as a movie. The setting is great for a heist comedy and with a few minor tweaks the story could work cinematically. The assembled talent on display here is likewise ripe with potential. The cast includes Harry Dean Stanton playing Charlie Sheen's father for the second time in their careers. The first was in Red Dawn in 1984.

I disagree with Scott about Wilson. I think he is perfectly suited for the role of beach bum/petty thief Jack Ryan. Like many Leonard protagonists he balances on that narrow line between hero and villain. His conversations with Freeman's Walter Crewes are easily the highlights of the movie. The unsurprising, surprise ending is given away by Crewes when he tells Jack, “Sometimes things are exactly as they seem.” If you haven't figured The Big Bounce out by then, you haven't watched enough movies. 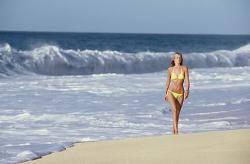 Sara Foster adds to the scenery in The Big Bounce

If ever there was an actor without any on screen depth, it is Owen Wilson. He has one stock character that he plays in every film he appears in. All of his roles are interchangeable. Since I have never met Mr. Wilson, he may not be acting at all, just reciting lines as he would in his everyday blessed life. I do not find him funny or charming.

With that said, I agree with Scott that due to Owen’s tired relaxed approach to the character, there was never any sense of tension. I cared not who was scamming who. The main characters are all crooked. I had little interest in what happened to any of them. Okay, that is a lie. I wanted to see them all get their comeuppance. None of these people deserved a happy ending. They spend the entire film as if on vacation, frolicking around Hawaii, breaking laws without a care in the world. Since they do not all get what they deserve, I found the ending to be as unsatisfying as everything that came before it.

Speaking of Hawaii, from the green palm trees to the blue sky, the beaches featured here look like God paints in primary colors. The dramatic roar of waves, dotted with anxious surfers and the sand being strolled upon by bikini clad hotties create a postcard that laughs in the face of anyone watching this movie in their living room while a wintry blizzard blows outside. How badly does it speak of a film when its setting leaves a greater impression than the plot.