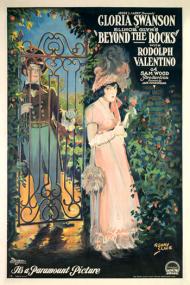 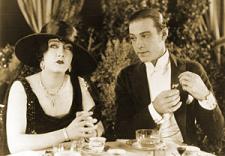 Released in 1922 Beyond the Rocks is a special part of motion picture history. Many silent movies were lost or destroyed after the coming of sound. For nearly 80 years this movie was believed to be lost forever. It was listed as such in all the old movie books I loved reading as a young boy. I was resigned to the fact that I would never get to see it. Then in 2003 a print was discovered in a private film library in The Netherlands. While not in perfect condition it was amazingly well preserved. After being restored, given new English titles and a new score, it was re-released at the Cannes film festival and was subsequently shown on TCM here in the states.

What makes the movie so special, of course, is that it was the one and only time that legendary silent stars Gloria Swanson and Rudolph Valentino appeared in a movie together. In fact during the silent era two big stars almost never appeared in the same movie. The studio heads didn’t see any advantage to giving the public two stars for the price of one. This team-up probably wouldn’t have happened except for the fact that it began production before Valentino became an overnight sensation in The Sheik.

Swanson plays the youngest daughter of a British family. She marries a much older man for his money in order to ensure the continued prosperity of her father and sisters. She almost immediately falls in love with Valentino who plays a half Italian nobleman. Within the first 20 minutes Valentino has saved Swanson’s life not once but twice. First when she falls overboard in a row boat and then later in the Alps. She is on her honeymoon and goes mountain climbing with friends. Her old husband staying behind in the hotel of course. Anyway as fate would have it, Valentino is also mountain climbing in that very same place. He rescues her when she slips off the side of a cliff and dangles in mid-air.

They continue their affair and finally her husband catches on. But he turns out to be noble of heart and realizing how much Swanson really loves Valentino he goes on a dangerous expedition in the Sahara Desert and gets killed by desert bandits. Swanson and Valentino then are free to be together and in the last scene they sail out “beyond the rocks” to safe water.

Although this wasn’t directed by DeMille it clearly imitates his style. He was, after all, the reigning director of Paramount and had directed the movies that made Swanson a star. She gets many fabulous costume changes including several fantasy flashbacks that were her trademark. One is set in 18th century Versailles and the other in ancient Egypt. She really was the first glamorous movie star. Before Swanson women in movies were either virgins or vamps. Valentino was the movies’ first Latin lover and the oldest romantic leading man still remembered today. Before him men were either villains or boy-next-door heroes.

Beyond the Rocks is a wonderful piece of Hollywood history. It exemplifies why California was the perfect place to make movies. The sea-shore, the mountains and the desert were all within a few hours of the early Hollywood studios. This movie shows the dawn of the romantic drama and stars two of the greatest movie stars of the silent era. They have sparkling chemistry together and although the movie itself is dated and the script nothing special it is an incredibly important historical artifact. 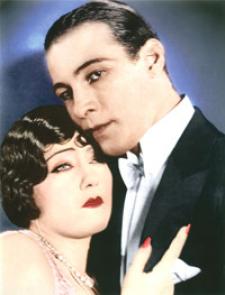 Gloria Swanson and Rudolph Valentino; The greatest leading actress and actor of the 1920s.

Beyond the Rocks is a tale of unrequited affection. Swanson and Valentino are in love, but she is married, and so they never do the deed. She makes it very clear that although her heart belongs to him, she is bound by her marriage to stay faithful. He understands and never asks her to break her vows.

Swanson and her husband may have never even had sex. They are never shown being at all affectionate to each other. At his age and health, it may have killed him. She is his decoration for parties, while he bores her to death. Look how excited she gets when someone says she can go to dinner with them, and get away from her husband for a while.

Swanson and Valentino constantly stare longingly at each other, and the mere presence of one, throws the other off their game. The very last scene is the most telling sign that they waited to have sex. Swanson is leaning quite relaxed on the railing of the yacht with her shoulder exposed. Valentino playfully touches her shoulder and she reacts pleasingly. Up until that point they were always nervous around each other, such as the moment alone in the Versailles garden.

I like the symbolism of their love for each other being in dangerous water. Their relationship seems to fit the old rock and a hard place saying. They meet in the waters off a rocky coastline. Later he saves her from falling to her death off the side of a jagged cliff. The scene in the desert features old rocky ruins. The last line of the movie is Valentino saying, "Darling, we have passed the rocks and here are the safe waters beyond."

Sure this is not the greatest movie ever made, but it does feature two of the greatest silent film stars. Patrick is right. Valentino had a unique look, and Swanson was the very first real movie star actress. Every other silent film star played a single persona on screen, but not her. She did comedies as well as dramas.

Although this film was restored, several scenes were very damaged. There are several seconds of film that are completely unwatchable. Also of note are a couple of mistakes. While at the Egyptian ruins there is a flashback to ancient Egypt, when a girl was tied to one of the pillars. In the flash back it is still ruins, when it should have been intact. The other big mistake is that a film crew member steps directly in front of the camera while filming an action scene with many extras.

For many reasons, Beyond the Rocks is a valuable Hollywood artifact. 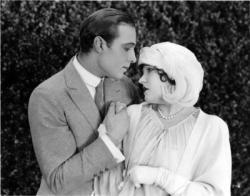 Rudolph Valentino and Gloria Swanson in Beyond the Rocks.

As both of my brothers have already said, the simple fact that both Gloria Swanson and Rudolph Valentino starred in this movie together makes it historically significant. Nothing else to do with the movie could affect its stature. Just having two such iconic silent film stars together in the same movie means that it is guaranteed immortality. That it was considered lost for 80 years only adds to its mystique.

Patrick, you compare this to a DeMille movie, but the way it differs is in the acting style. DeMille was great on spectacle, but he seemed to favor highly melodramatic performances from his cast. Here though, the acting is quite natural, particularly for a silent film. This is the best and most subtle performance I've seen Valentino deliver and is light years away from his hammy acting in The Sheik.

The story is based on a popular 1906 book by Elinor Glyn, the author of It, which would be made into the hit 1927 Clara Bow film of the same name. Like that later film, this one is pure soap opera. Where that one is light and breezy though, this one is much heavier. It demonstrates quite clearly how few original plots actually exist in movies. How many times in the 90 years since it was released have we seen a similar love triangle to this one? Granted, in most  you don't find such an obliging husband, but it's safe to say that we've seen this plot literally thousands of times since.

What's great about the movie is that not only are Swanson and Valentino two iconic silent film stars, but they truly work well as a couple. They do share a terrific chemistry together as my brothers have said. It's a shame that they didn't make more films together, but as Patrick pointed out, having more than one big name star in a silent movie was a rare occurrence.

Beyond the Rocks is well made, silent soap opera, but it is the pairing of Swanson and Valentino more than anything else that makes it required viewing for any silent film buff.