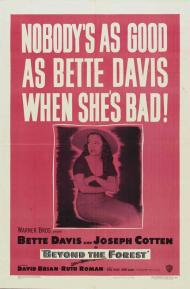 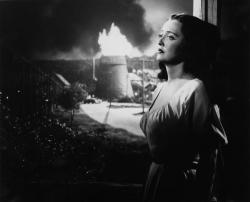 Bette Davis in Beyond the Forest.

1949's Beyond the Forest turned out to be Bette Davis' last movie for Warner Brothers. It is also widely considered to be her worst. It survives today as a minor camp classic. The single most memorable thing about it being the line, 'What a dump', famously imitated by Elizabeth Taylor in Who's Afraid of Virginia Woolf?.

Beyond the Forest, besides having a stupid title, is full of silly dialogue with a plot best described as forgettable drivel. Davis is Rosa Moline, white-trash wife of Doctor Moline (Joseph Cotten) living in a small town in Wisconsin. Rosa longs for the glamour and excitement of the big city and is having an affair with a rich Chicago businessman, whom she conveniently met at his nearby hunting lodge. When the good doctor finally gets fed up with his no good wife and throws her out, she runs to the arms of her lover only to be rejected. Pregnant, she returns home and begs her husband's forgiveness. When the rich guy changes his mind and comes for Rosa, she must keep her pregnancy a secret at any cost. Up to and including murder.

Bette Davis looks utterly ridiculous in the long black wig she wears, constantly tossing it over her shoulders with one hand or the other. She flounces around, shaking her hips like a hyperactive schoolgirl, even though she was on the far side of forty when she made this picture. Pity Joseph Cotten and everyone else unfortunate enough to share the screen with Rosa Moline, she not only chews up the scenery, but everything that moves in this unintentionally hilarious melodrama. This ham is overcooked.