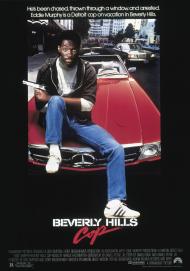 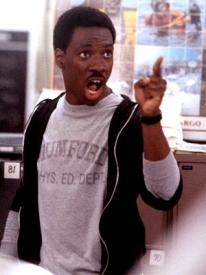 Eddie Murphy was at the very height of his career in 1984. It was his final year on Saturday Night Live and it saw the release of his biggest film to date, Beverly Hills Cop. It spawned two theatrical sequels and a made for television film. He shared top billing on his earlier successes, 48 Hours (1982) and Trading Places (1983), but Beverly Hills Cop is all and only about Eddie Murphy.

Axel Foley (what an awesome name) is a hardheaded Detroit Cop who cannot stay out of trouble with his boss. Axel is briefly reunited with an old friend, Mikey, who just returned from Los Angeles. After Mikey is murdered, Axel takes a vacation and heads to Beverly Hills to investigate his death.

The film, at first, seemed intent on showcasing the differences between the culture and finances of Detroit and Beverly Hills. The difference in wealth is obvious and Murphy is shown laughing at some California fashion, but the clash of cultures quickly takes a back seat to Eddie Murphy's antics, ad-libs and infectious laughter. This is best demonstrated by Murphy's comments about the Beverly Hills' police cruiser.

From pretending to be a Rolling Stone reporter to his, "your dick is supposed to get hard" speech, to pretending to act like a gay hustler, Eddie Murphy is a non-stop supply of entertainment. Put him with two straight laced cops and you have the start of something great. Judge Reinhold and John Ashton have a few good moments, such as the red meat conversation, but they are best when playing the straight men to Murphy.

The only person on screen who is able to steal even a moment away from Murphy is Bronson Pinchot as Serge, the heavily accented, feminine acting art dealer. Axel Foley, "Get the fuck out of here!" Serge, "No, I cannot!"

Serge works with Jenny, another old friend of Foley's, whom Mikey recently visited. Through her, Foley quickly discovers the murderer as well as uncovering a drug smuggling operation. There is plenty of action, with Foley even getting thrown through a window. The investigation and subsequent shootouts are all well and fine, but everything takes a back seat to the whirlwind that was Eddie Murphy in 1984.

Many lines and jokes in this film are credited to Murphy ad-libbing them. The original script was more action oriented and intended as a vehicle for Sylvester Stallone, who took some of the original ideas intended for this film to his ill-fated, Cobra (1986). Had Stallone stayed with this film, I doubt it would have been remembered as fondly, especially when all that is remembered is Eddie Murphy demonstrating what real comic talent can bring to a film. 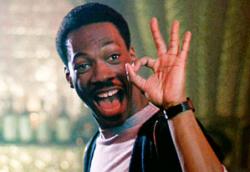 It's not just comic talent that Eddie Murphy displays in this movie, although he does display an awful lot of that. In this film he is a force of charisma almost unparalleled. It's almost impossible to not like him. He has an easygoing charm that marks him as a movie star and for a while in the 1980s, he really was one of the biggest stars on the planet. And this was the most successful movie of the year, earning more money than Ghostbusters, Indiana Jones and the Temple of Doom, Gremlins, The Karate Kid, Footloose, Romancing the Stone, and Star Trek III: The Search for Spock, which were also released in 1984.

One of the things that really makes this movie work is that it balances the comedy and the action so well. In most films of this sort, the action takes a backseat to the comedy and avoids any real tension, but here the film retains at least a mild sense of tension despite all of the humor. This is again thanks in large part to the presence of Eddie Murphy, who at this stage of his career still maintained a believable edge. When he threatens the villain and his henchmen at their country club, the film has just enough sense of seriousness for the threat to seem real.

Something Eric failed to mention is the soundtrack. Alongside the very famous, and era evoking theme tune, "Axel F", it features other 80's classics like Patti LaBelle's "New Attitude", the Pointer Sister's "Neutron Dance", and Glenn Frey's "The Heat is On". For anyone who lived through and loved the music of the 1980s, these songs will transport you back in time.

Although Eric downplays the contributions by Judge Reinhold and John Ashton, they are integral to the film. As he said, they work best when supporting Murphy, but that's actually a key role. Without someone to bounce off of, Axel's character wouldn't work nearly so well. And to Reinhold, Ashton and the script's credit, they manage to be straitlaced without being silly caricatures. The two of them work well together on their own as well, behaving almost like an old married couple.

Perhaps what's most amazing about this film is that Eddie Murphy was just 23 years old when it was released. His career burned like a meteor across the cinema firmament, brighter than almost everyone else's for a time in the 1980s. We know now that it wouldn't last, although his career is far from over and I suspect he may surprise audiences again before it finally is, but to watch Beverly Hills Cop is to watch a young star burning at its very brightest. 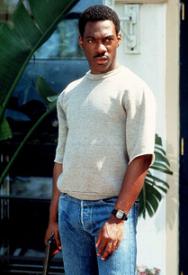 I can only agree with my brothers. Eddie Murphy is a supernova of energy, charisma and comic talent. From his trademark laugh, “A heh-heh-heh-heh.” to his many hilarious ad-libbed lines, to the ease with which he handles the more physical aspects of the role, he is Movie Star perfection come to life, and Axel Foley is his greatest character.

As great as Murphy is though (and he certainly carries the movie) his supporting cast is also quite good. Judge Reinhold and John Ashton make a great team. Whether playing off each other or playing straight man for Murphy they bring a lot to the table. Scott, it's funny you mentioned them behaving like an old married couple because that was the direction they were given during auditions. They were competing with two other men for the roles and Martin Brest told them, “You are a middle aged couple, married for years. You are having a conversation on an average evening.” Whereupon they improvised the whole “red meat” conversation that actually wound up in the movie and in the process secured the parts.

Murphy reportedly ad-libbed many of the movie's funniest lines. One of my favorites comes after his initial arrest for “disturbing the peace” in Beverly Hills. An exasperated Foley states, “Disturbing the peace? I got thrown out of a window! What's the fuckin' charge for getting pushed out of a moving car, huh Jaywalking?”

Another of my favorite bits of dialogue occurs when Foley first meets Police Chief Hubbard...

Scott mentioned the classic songs on the soundtrack, which by the way, went to number one on the Billboard album chart. They are indeed an evocative time capsule of the 1980s. The early scenes in Detroit are also a priceless window into the past. Brest, accompanied by a police escort, filmed on the troubled streets of the Motor City. Those are real residents of Detroit, who later gave permission for their images to be used in the movie, that you see in those early montage shots. Legend has it that at times the police would refuse to go along if they felt it wasn't safe but the intrepid Brest went ahead and kept filming with just his crew.

I was 17 when this movie came out and I saw it several times in its initial run. In 1984 Eddie Murphy was my favorite male movie star on the planet and Beverly Hills Cop is quite simply one of the funniest movies of that decade.