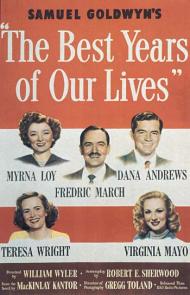 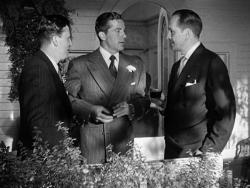 More than any other movie The Best Years of Our Lives makes me think about my grandma's house and the street we lived on when I was a child. Although The Best Years of Our Lives was released in 1946 and I grew up in the seventies, the houses, garages, sidewalks and shade trees depicted in the movie where Homer Parrish lives, never fails to remind me of Lakeway Avenue and of the old shell-shocked veteran that walked around the neighborhood mumbling to himself and scaring all the local kids. It also always reminds me of my grandfather's WWII Army uniform that hung in the basement closet. Although there is no specific scene like this, whenever I watch the movie I always think of the time my brothers and I found an old black and white photo of our mother as a little girl inside the crease of his sergeant's cap. A soldier's memento of home that had been there undiscovered since my grandfather's death in 1960.

The Best Years of Our Lives, directed by the great William Wyler, is a classic war movie that doesn't feature a single battle scene. Instead it brilliantly depicts how three different men from the same small town readjust to civilian life.

One is an Army sergeant (Fredric March) returning - after 3 ½ years - to his job as a banker and faced with getting reacquainted with his wife (Myrna Loy) and his two children who have grown into strangers. One is sailor Homer Parrish (played by real life paraplegic Harold Russell) dealing with the trauma of losing both his hands in combat. And the third is an officer in the Air Force (Dana Andrews) returning to his wife (Virginia Mayo), a woman he barely knows. The way this movie handles the frustrations and joys of their first hours and days back home is sheer poetry.

The Best Years of Our Lives is a powerful and hypnotically nostalgic motion picture. 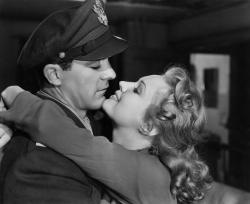 Dana Andrews and Virginia Mayo in The Best Years of Our Lives.

I remember the old war veteran Patrick wrote about. I remember as a child playing toy soldiers across the street with a friend. I had all the plastic German soldiers and Panzer tanks. My friend had the little plastic American soldiers and Sherman tanks. The old veteran walked by us on the sidewalk and asked who was playing the Americans. My friend said that it was he and the old man shook his hand, then walked off. At the time I felt insulted, but was not sure why. Looking back, I guess he was a soldier who never quite got over his time spent at war.

That is exactly what The Best Years of Our Lives is all about. Different men come home to a different world than what they left. They adjust but are fully aware that they too are different from when they left. This movie came out right after World War II and I am sure it hit home with thousands of people.

These men are all sympathetic characters. Fred Derry was a pilot. He was an officer who had men's lives in his hands as he drove those planes. After the war he gets a belittling job working behind a cosmetics counter. Homer Parrish lost his hands in the war and now has claws. He is engaged. The movie does not go into detail about this aspect, but what sexual insecurities are he and his fiancée experiencing?

These men are scarred physically and emotionally. In one scene Derry walks through a dump full of old planes. He seems to almost be homesick for the war.

I am not a big fan of old dramas. This is a rare exception. These are real characters going through situations that every servicemen has gone through when returning from an extensive duty. This movie is as relevant today as it was in 1946. I bet any returning U.S. servicemen from Iraq would agree. 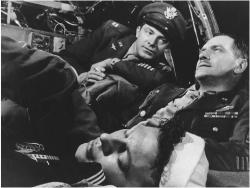 It's funny the difference just 2 or 3 years can make in a lifetime.  Being that I am that few years younger than Patrick and Eric respectively, you wouldn't think our memories would be that much different, but I have no memory whatsoever of the World War II Vet who wandered the neighborhood.  Nor do I remember a picture in my Grandfather's army uniform, or my Grandfather's army uniform for that matter.

I'll just get my standard complaint out of the way first.  This movie is too damn long.  It's nearly 3 hours in length, which is way too long for a heavy melodrama.  The writers try to give each of the characters equal screentime when they should have focused on just one of them as the main character and let the others play more supporting parts.  To my mind, Frederic March as Al, is the most interesting character and the entire movie could have been about him.  His is also the one character whose future is never fully resolved.  Homer and Wilma live happily ever after and Fred finds some peace with a new job and Peggy as a future wife, but Al's future is more vague.  He seems bound for alcoholism and for how long will he keep his job at the bank?

Lately I've been watching a lot of Pre-Code movies in which I've enjoyed the adult and mature nature of the plots and dialogues.  Suddenly switching gears to this 1946, deep in the Code, movie came something as a jolt and not in a good way.  Sex and intimacy plays a big part of all the storylines, but because of the Code, it is only ever tiptoed around and never frankly discussed.  It's easy to see why this myth that the 1940s and 1950s were a more innocent time was created, since no one was ever allowed to talk like grown-ups in movies or on television.  Eric, you mention the sexual insecurities that Homer must be feeling and I have to fully agree.  Part of the reason Homer is so nervous about being with Wilma has to be sexual, but you'd never know it from the dialogue.

All three of the leading actors do a great job.  You empathize with each one of them for different reasons.  They put a human face on the returning soldiers and made me want to find a Vet and shake his hand.

It must have definitely hit home with audiences of the time.  In fact, at the time of its release, it was the most successful movie since Gone With the Wind.  It also won 7 Oscars.  However, while the ex-soldier melding back into civilian life is timeless, the rest of the movie seems very dated, partly due to the Code, but also due to the heavy melodrama that was the fashion of the time.  There's far too many moments of swelling music for my liking.

There are powerful moments scattered throughout the movie, but I would never call it hypnotic.  Nor would I call it poetry.  There are pieces of brilliance, but it definitely needed a tighter editing job.

One thing that helped me get through this butt-numbingly long movie was by saying, "With a name like Dana!?!" every time Dana Andrews appeared on screen.  If you're familiar with Woody Allen's Radio Days, you'll get the reference.