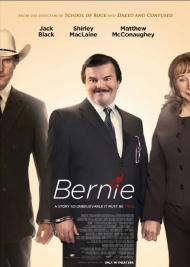 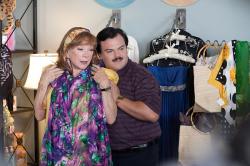 Bernie tells the bizarre true story (or truly bizarre story) of the unlikely friendship between local mortician Bernie Tiede and wealthy widow Marjorie Nugent of Carthage, Texas. The pair first met in the late 1980s at the funeral for Nugent's husband. They eventually became constant companions with Tiede accompanying Nugent on many first class vacations around the globe and serving as her personal assistant. That is until the fateful day in 1996 when Tiede shot Nugent four times in the back with a rifle and then placed her body in the freezer in her garage where it stayed for the next nine months (like a good funeral director he made sure to preserve the body). Tiede later confessed to the murder and is currently serving a life sentence behind bars.

Writer/director Richard Linklater (Dazed and Confused, School of Rock) has turned this morbid story into an amusing black comedy starring Jack Black as Bernie Tiede and Shirley MacLaine as Marjorie Nugent. Matthew McConaughey (playing yet another lawyer) is the local DA, a man portrayed in the movie as a publicity hound. Their fictionalized story is interspersed with interviews with actual residents of Carthage, people that knew the real Bernie and Marjorie. The blurring of real life with reel life adds an interesting perspective to the proceedings.

If there is a flaw to this pseudo-mockumentary approach it's that the off-the-cuff commentary by local residents, in their East Texas drawl and using homespun colloquialisms, is often funnier than the scripted dialogue. One particularly memorable woman says, “I knew many people that would have shot Marjorie Nugent for five dollars.” And when the subject of the possibility of Bernie and Marjorie having had a sexual relationship is brought up, she observes about the clearly homosexual Bernie, “That dog don't hunt.”

By all accounts Bernie Tiede was one of the most popular people in town. He was a friend to little old ladies, and highly active in local affairs, serving as choir director for his church and directing and acting in community theater productions. Marjorie Nugent, on the other hand, was universally reviled as one of the most unlikable and despicable human beings ever to draw breath. At one point she was sued by her grandchildren and, at the time of her murder, her own sister hadn't spoken to her in years. She was abrasive, miserly and rude to one and all. But Bernie somehow won her over and then later rued the day he met her as she grew more and more possessive of his time and insufferable in her behavior towards him.

Jack Black is a delight as the cheerful, effeminate, psalm singing Bernie. Although he definitely highlights the humorous aspects of Bernie's personality he never turns his performance into a caricature. His Bernie is a fully developed flesh and blood creation. Shirley MacLaine has made a late life career playing cranky old wealthy eccentrics and she's a hoot as Marjorie Nugent. She and Black make a formidable movie pair.

The upshot to the story is that Bernie was so beloved and Marjorie so disliked that the District Attorney requested the trial be moved away, as he didn't believe he could get a conviction against Bernie locally, even though the accused had given a full confession to the crime! Anyone that likes their humor a bit twisted will enjoy Bernie. The cast is terrific. 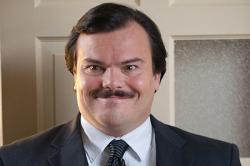 The story of Bernie shows the power of popularity. He was a town character who seems to have been liked by everyone who knew him. Mrs. Nugent, on the other hand, was regarded as a mean old lady by seemingly everyone who knew her, including her own family. When the townspeople learn of her death, the general reaction seems to have been that she got what she deserved, while Bernie is almost praised for showing the patience to not kill her earlier.

Like Patrick, I enjoyed this rather twisted comedy. Its cast of small town characters, some of them the genuine townspeople who knew Bernie and Mrs. Nugent, provide plenty of laughs. Their colorful commentary is the funniest part of the film. I particularly laughed when, upon learning of the murder, so many of the townspeople came up with suggestions of how Bernie could have disposed of the body.

Although the story is kept light, I couldn't help but take a darker view of Bernie than the movie gives. He's portrayed as a genuinely nice man who is pushed to the edge and seems to commit the murder in a moment of madness. I can't say I quite buy that version of events. If Mrs. Nugent was so awful, why did he continue as her companion? For the money, is the obvious answer. He enjoyed what her wealth could bring and he enjoyed playing the town benefactor. He stood to gain quite a lot by her death.

The cast is good. I also agree with Patrick though, that the townspeople often upstage the actors. They come across as small town characters while the actors sometimes appear to be small town caricatures, particularly Matthew McConaughey, who plays it quite broadly at times.

Lots of movies claim to be based on a true story, but most of the time that knowledge has little bearing on the finished film. They would still be just as entertaining or unentertaining regardless of that fact, but with Bernie, knowing that this is based on a real murder, definitely affects how you view it. If townspeople's reaction wasn't so well documented in real life, you might think the filmmakers were exaggerating them. It's definitely a case of fact being stranger than fiction. 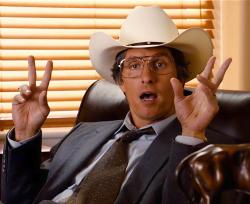 My brothers both mentioned how this is based on true events and real people, but the more the movie went on, the less realistic the character of Bernie became. Everyone of the "real" people kept talking about what he did with his time, from doing other peoples taxes to singing in the church choir to directing plays. Add in his job at the funeral parlor and all the time he spent with Nugent, and Bernie nearly becomes a tall tale. This may be an accurate portrayal of Bernie Tiede but it seems that over the course of time his life almost became an exaggeration.

Bernie Tiede has stated in interviews that he, "just snapped." the day he shot Marjorie. Claiming he is not sure why he did it. The Amarillo Globe-News however, alleged that Nugent had discovered that Tiede was stealing money from her and that she was running away from him when he shot her four times in the back. It was also reported that they discovered home made videos of Bernie having sex with other men. Again, begging the question, how did Bernie manage to have so much time on his hands?

If there is any lesson to be taken from this it is that we never really know what others are capable of. Bernie's boss at the funeral parlor called him, "The nicest guy I ever met." and Marjorie "evil". Yet Marjorie never killed anyone in cold blood. A local minister even asks his congregation to pray for Bernie after they all knew he was a murderer. Is it not interesting how we can so easily forgive those we like and blame those we do not, even when facts tell us otherwise?

A last note of interest is that Matthew McConaughey's mother plays one of the interviewed towns folk. She is the one talking about how Marjorie bought a sheer brassiere.