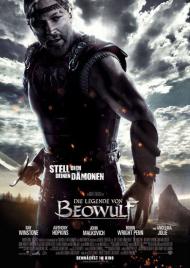 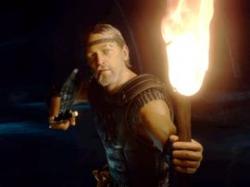 The first thing to note about Beowulf is that it is an animated movie with movie stars. That is to say that actual actors have been digitalized. At first I wondered why they bothered, but once you see all of the action scenes, not to mention the nudity, you realize that it was the most logical approach.

This ancient tale begins in a Danish kingdom where a king is hosting a raucous gathering of his men and women. The noise they create in their drunken revelry annoys Grendel, a demon living in the near by mountains. It annoys him so much that he busts into the mead hall and goes about brutally killing everyone in sight. Only when the King faces him does he stop his assault and return to his lair.

The King then makes an offer of half his treasury to any man who can kill Grendel. Beowulf answers the call. After flirting with the queen, Beowulf, for some reason, gets completely naked and commands his men to sing loudly. Grendel shows up and the bare ass hero goes mano-a-mano with the deformed demon. Grendel however, is not the real danger in the movie. It is Grendel's mother, played by Jolie who prefers to be sans clothing as well.

Without giving it all away, Beowulf is in essence a soap opera with special effects. There is sex, lies and betrayal. The final moral being that man is weak when it comes to wealth, glory and sex.

The animation is amazing. The dragon fight scene is particularly exciting. However, the animation is hardly even worth mentioning anymore. Any new video game is as realistic as what you will see here. The best accomplishment it makes is that after only a few seconds of adjusting to the animated actors, I forgot all about them not being completely real. 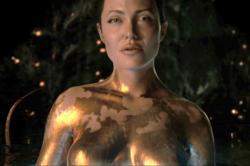 I never adjusted to the animation. It's not that good. At least not for the people. The dragon is fabulous and the best part of the movie is the climatic fight scene involving it. But apart from that, there wasn't much about this movie that I enjoyed.

The characters are still very stiff facially. When they're not speaking, their face is wax like and immobile; almost like animated corpses. I would much rather have seen this movie done as live-action. CGI is great and definitely has its place. Andy Serkis as Gollum is a great use of it, but thankfully they didn't make the entire Lord of the Rings CGI.

As for the plot itself, it never sucked me into it. Beowulf has nothing to recommend him apart from his muscles. The characters who generate the greatest sympathy are the villains, Grendel and his mother. Grendel is horribly malformed. A condition that extends from his body into his mind. He doesn't seem so evil as he does insane. Grendel's mother uses her strongest weapon to protect herself and her children; her sexuality. Her reward? Both of her children murdered.

Eric is right. The animation is hardly worth mentioning, because it is the least important aspect of the movie. Without a strong plot and a hero I can get behind, the best animation in the world isn't going to make me like it.

I didn't expect to like this movie but I actually rather enjoyed it. The plot takes a few liberties with the epic poem on which it is based, adding an interesting twist to the story. Instead of a straightforward adventure tale of hero against monster this is also a story about the sins of fathers. The sin is lust and Grendel's mother a succubus. Both Hrothgar and Beowulf are weak when it comes to the flesh and they both pay a high price for it.

I wasn't distracted by the animation but I wasn't overly impressed with it either. Even though movies are all just make believe I always find it easier to empathize with a screen character when they are played by a real person than when they are animated. I therefore, like Eric, appreciated the fact that these characters resemble the actors voicing them. There is an instant recognition factor, for example, in having a CGI'd Anthony Hopkins play King Hrothgar. We get that character immediately. Of course this sometimes works against the movie. I couldn't help but be momentarily taken out of the story when Grendel's mother finally showed herself and she was Angelina Jolie with a tail.

Another change to the story is one Scott mentioned. This version of Grendel is not so much evil as he is pathetic. He's a tormented soul, intended as a curse upon his father. King Hrothgar had the effrontery to reject Grendel's mother, and you know what they say about fury and a woman scorned. Well it's nothing compared to fury and a female demon scorned. In the third act the curse has been passed on to Beowulf, whose own offspring comes home to roost. It provides an exciting finale to this animated classical epic.

The morality is quite old fashioned and puritanical. Men are portrayed as being capable of incredible feats of physical strength but weak-willed when it comes to sex. In this world the offspring of adultery is deformity and a dragon. Grendel's mother is a devil seductress wielding her sexuality to corrupt otherwise upstanding men. Be that as it may, Beowulf tells its tale in a fast-paced, action-packed manner, containing a surprising amount of tension and gore for a movie that is essentially a cartoon. And in a world where nearly every cartoon is aimed at children I found the nudity, gore, and sexual situations in Beowulf quite refreshing.