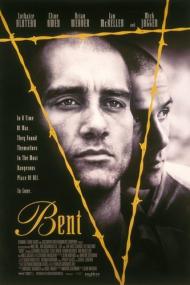 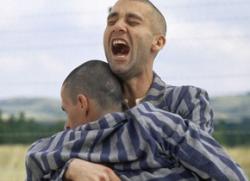 With so many recognizable names, and the holocaust as the subject matter, I decided to give Bent a shot. Based on a play, I was not sure what to expect. What I found was a gay love story about redemption and sacrifice. Unfortunately though, most of the famous faces are mere cameos.

Max is a gay playboy. He makes the rounds of the Berlin gay scenes. His boyfriend and roommate, Rudy, is a dancer at a club run by a drag queen, Greta/George, played well by Mick Jagger. The clubs are closing up as the Nazi's have made homosexuality a crime punishable by imprisonment. As the movie opens, Max takes a Nazi brown shirt, Wolf, home with him that he met at Greta's. He flaunts Wolf in front of Rudy. Some Nazi's come looking for Wolf, sending Max and Rudy on the lamb.

They make an effort to get out of Germany, but get captured and put on a train to a concentration camp. In a harrowing scene, Rudy is pulled into another car and beaten to death as Max listens. The Nazis then confront Max, who claims to not know Rudy.

Scared by the event, Max pretends to be a straight Jew at the camp. He is given a yellow star instead of a pink triangle. He is put to work with a gay man named Horst. Much of the rest of the film involves their dialogue. They fall in love and through Horst, Max redeems himself over how he treated Rudy.

Based on a play, I expected some great dialogue, but very little stood out. My favorite line is when Max is asking Horst about the gay clubs he visited. After finding one they had both frequented, Max asks, "And you never saw me?" and Horst answers sarcastically, "Well, actually I did. I saw you by the river. You were making a fool of yourself, and I said, someday I'll be in Dachau with that man moving rocks."

In real life gays in Nazi Germany were imprisoned, as the Jews were. However, people sent to the death camps were either killed or put to work for the war effort. In Bent, Max and Horst just move rocks and snow pointlessly. "You move rocks from there to there and then from there to back again." Perhaps I am nitpicking, but the Germans did not have enough soldiers to have one or two watch these men do nothing productive all day. It does not make sense. It is almost as big a stretch as the no touching sex scene.

The message of the film is a respectable one. Even though he is under harsh circumstances, Max learns to have pride in who he is. He took Rudy for granted, but he sacrificed for Horst. Through his relationship with Horst, Max gained honor. Is there any loftier message than that? 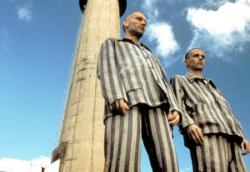 The first time I saw this movie the only faces I recognized were Mick Jagger and Rupert Graves. Since 1997 many in the cast have gone on to fame and fortune. As Eric pointed out most of them have very small roles here as this is for the most part a two man story.

I’m going to give away a plot point that Eric just touched upon. In the scene on the train, the Nazis don’t actually beat Rudy to death, just near it. It is Max that is forced to hit his former lover with a stick and he is the one who actually kills Rudy. In another harrowing scene we learn that in order to prove he is not a homosexual Max had sex with a 13-year-old girl’s just murdered corpse in front of laughing Nazi soldiers. You see in the concentration camp pecking order a yellow star is preferable to a pink triangle.

The combination of these two despicable acts, which Max commits in order to stay alive, cause his sanity to stretch nearly to the breaking point with overwhelming guilt. His subsequent relationship with Horst renews his faith in life. Having Horst to talk to and connect with as a fellow human being helps keep Max alive. But this being a story about the Holocaust you should be prepared for a downer of an ending.

Bent isn’t a great film but Max’s final symbolic act of redemption is emotionally devastating. If it doesn’t move you to tears you shouldn’t call yourself human.