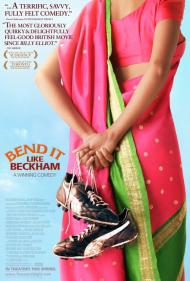 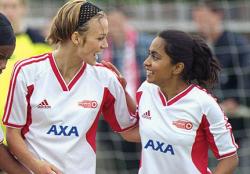 Bend It Like Beckham is one of the best 'feel good' movies made in recent years.  Its story of Jess Bhamra, a British girl from a strict and traditional Indian family, and her struggle to play football like her idol David Beckham, is funny, touching, and inspiring.

During the summer before she goes off to university, nothing is more important to Jess than football. Not even her sister's upcoming wedding, which is the focus of the rest of her family's attention.  She spends all her spare time playing it in the park with friends.  When a girl from the local team sees her play and offers Jess a chance to play in a real league, she leaps at the chance.

But what her family indulged as a harmless past time, they begin to object to as it threatens to consume her life.  Willing to do anything to keep playing, Jess invents a summer job so she can sneak off and continue playing.

A fellow team mate, Jules, tells Jess about her plans to go to America where women can play Soccer professionally.  Jess and Jules's coach, Joe, has arranged for an American scout to show up for the final game of the season, which could be the girls' big shot.

Ok, so the plot isn't the most original in the world and yes, some of it is predictable.  Jess and Jules both fall in love with Joe and have a falling out over it.  And inevitably Jess's family discovers what she's been doing and try to keep her out of the big game.  But like all great movies, it doesn't matter if you know how it's going to end, because the journey is its own reward.  This movie is filled with such heart and humor that it doesn't matter if you guess how it's going to end.

What makes the movie so wonderful is that it never takes itself overly seriously.  It keeps its tongue in cheek even through the touching scenes, balancing heart with humor.  And the movie has lots of humor.  Jules' mother becomes convinced for a while that Jules and Jess are lesbian lovers, the misunderstanding of which leads to some of the movie's funniest moments.

A feel good movie of the very best kind, Bend It Like Beckham is irresistibly charming. 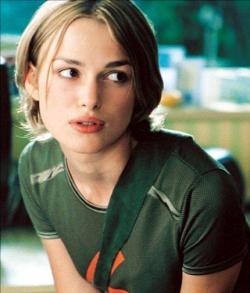 Bend It Like Beckham is My Big Fat Greek Wedding with a weaker ending. Both films are about a proud ethnic family that lives in a world that doesn't completely understand them. Both have female leads that step away from their family's desires in order to make themselves happy.

In Beckham, Jess has a much harder time defying her family than Fotoula does in Greek Wedding. Fotoula was simply marrying outside her ethnic background. Jess is shattering every notion her family has about women in society.

Both movies have the fathers as catalyst and hero. In Greek Wedding, Fotoula's father does the humorous, 'apples and oranges' speech at her wedding. It is his way of saying that it's okay. In Beckham, Jess's father allows her to go to her final soccer game during her sister's wedding. He also attends a game and proudly watches her play. Both men eventually come to understand their daughters. It is on both fathers shoulders that the arc of the stories rests.

The difference between these stories is that My Big Fat Greek Wedding is better. Not only is it funnier, it ends on a definite note. She gets married, has a daughter and lives happily ever after next to her newly understanding parents. Bend It Like Beckham plays like an after school special. All she wants to do is play soccer. That is the whole goal and climax of the movie. The extremely mild relationship she develops with her Irish coach is never completed. She goes to college with just a suggestion that they may have a relationship later.

Sure, Jess has just taken a huge step in life. Yet, it is hardly the end of the story. Does she do well on the team? Does she make a profession at it? Does she ever come back and marry her coach?

Another big and important difference is that in Greek Wedding, Fotoula seems happy and proud of her family. She genuinely seems to enjoy being around them, even when they act nuts. Jess never seems happy with her family. She is an outcast forced to talk to posters of David Beckham in the privacy of her bedroom, because no one in her family understands. You would think that some one so miserable would not have such a hard time leaving behind a family that appears to do little more than restrict and ignore her. 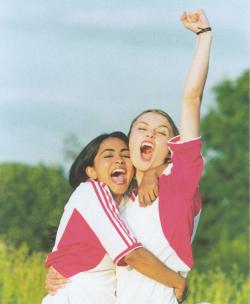 Bend It Like Beckham is definitely a 'feel good' movie and it is certainly not without charm. The story is touching and funny, and it has characters to root for. It's just too bad that the filmmakers felt the need to insert an almost continuous stream of motivational montages accompanied by peppy, uplifting pop songs. Jess bonds with her teammates in a montage to a song, Jess goes shopping for soccer shoes in a montage to a song, Jess goes to the big game in a montage to a song. I can appreciate Blondie's 'Atomic' as much as the next guy, and I liked the infectious dance beat of 'Kuria Punjab Diya', but these numerous musical interludes slow the movie down too much. Twenty minutes could have easily been trimmed from the final print and the movie would have been better for it.

On the other hand Eric is overly critical of the story. While I agree with him that My Big Fat Greek Wedding is funnier, the devotion and love Jess feels for her family - and vice/versa - is made perfectly clear. His statement that she 'never seems happy with her family' is simply not true.

Scott mentioned the humor. Jess's friend's mom gets the best lines. She tells her tomboyish daughter, 'There's a reason why Sporty Spice is the only one without a boyfriend, you know.'