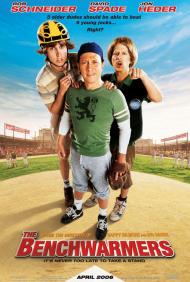 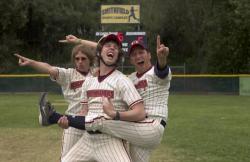 Rob Schneider has made a career out of playing idiots and weirdos. In The Benchwarmers he comes across as the normal character. He plays a landscaper, Gus, whose wife wants to have a baby. His co-stars are David Spade playing a 39 year old virgin who has a brother that lives in a closet because he is scared to death of the sun and Jon Heder who plays an adult paperboy who gets excited when his mom text messages him about having macaroni and cheese for dinner.

The three friends defend a little boy from a baseball team of bullies who scared the boy and his friends off a baseball field. This action eventually leads to Gus, Clark and Richie playing the bullies in a baseball game. The boy they defended watches the game with his very rich father, Mel, who is an obvious nerd himself due to the fact that his mansion is filled with, what else, Star Wars memorabilia. After the game, that the three guys win due to Gus being a great player, Mel approaches them about starting a tournament where the three guys would play against local little league teams. Mel was a nerd as a kid and sees the opportunity to give some pride to baseball loving nerds everywhere by having these three adult rejects beat a bunch of kids at baseball.

The Benchwarmers works great as a politically incorrect comedy. Most of the nerd kids either wear glasses or are fat or both. The coaches of the other teams are all rude arrogant men who like to get their titties twisted when they fail. One turns out to be gay with a ever wearing Speedo boyfriend. Another one is black and wears a blond wig. One coach allows a drunken Mexican man to play for his kids baseball team. He drinks tequila on the mound during the game and yells out "Maria!" for no apparent reason. Even midgets take a harsh skewering.

The Benchwarmers is a guy's movie with flatulence jokes and plenty of slapstick, but it loses itself at the end when everyone suddenly decides to play nice. It's like when a young son is having a great time rough housing with his dad when the mother walks in and puts an end to it because someone may get hurt. Sometimes rough play and rude jokes are a lot more fun than safe interaction.

The Benchwarmers pulls no punches early on in the movie but then it decides to add a moral at the end to appease the mom's of the world. Mel learns a lesson along the way and everyone ends up happy. Okay, it's a message about getting along but that is not why anyone will enjoy this movie. Heder's nose picking geek gets many laughs, "I'm not picking. I'm scratching." As does Lovitz's shnarky delivery, "If you build, it nerds will come." The moral ending will be forgotten as soon as it appears on screen.