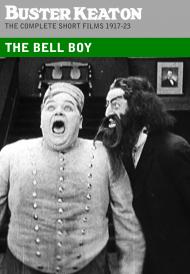 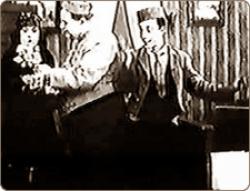 Buster Keaton and Fatty Arbuckle in The Bell Boy.

The story of Buster Keaton starting as a supporting player to Fatty Arbuckle and then becoming a superstar in his own right is well known among movie history buffs. The two actors made 14 shorts together. In The Bell Boy, their 8th film together, it started to become clear that Arbuckle relied more on Keaton and Al St. John to fill in for his lack of physical creativity.

Arbuckle and Keaton play Bell Boys at a hotel. There is some antics, a girl, some police and a horse powered elevator. But the scenes that will stay with you are the ones where Keaton and St. John do things with their bodies that do not even seem possible. They literally throw themselves around. They flip, jump and fall in ways that only trained acrobats could do. They didn't have stunt doubles in those days. These guys were amazing.

Al St. John started in Keystone Comedies with Arbuckle. He was thin and muscular like Keaton, only taller and blonde. He worked with Arbuckle on countless films. Where as Arbuckle was the creative brains behind his work, it was St. John and Keaton who managed the amazing stunts that make so much of his films memorable.

In the silent film era, movie stars always seemed to have an identifiable personality or accessory. Theda Bara was the vamp. Chaplin was the tramp with his mustache, hat and cane. Clara Bow was the flapper. Gloria Swanson was the modern girl. Mary Pickford was the virgin. Valentino was the Latin lover. Harold Lloyd always wore his glasses. Keaton often wore his Porkpie hat and kept his face in a constant state of detachment. Thus he was called The Great Stone Face. St. John was a great talent and he went on to act in hundreds of movies and television shows, but he was never able to stand out enough to be noticed and remembered beyond being a supporting actor. Watch him in The Bell Boy and you will find an artist who deserves to be remembered. 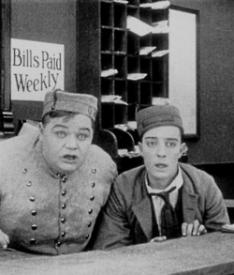 Fatty Arbuckle and Buster Keaton in The Bell Boy.

I disagree, Eric, the more I see of these shorts the more I realize just how talented Arbuckle was. He was clearly the star and comic force behind this movie. His doughy face with its chubby cheeks and expressive eyes was a natural for the camera. Sure Al St. John was a rubber-faced, nimble-footed comic but compared to the more charismatic Arbuckle and Keaton he was a mere shadow on the screen.

The Bell Boy opens with the following title card: THE ELK’S HEAD HOTEL. Third class service – first class prices. This sets the tone for all the shenanigans to come. Arbuckle makes his entrance, stands there a second, and then produces a lit cigarette from inside his mouth. He then has a funny moment where he sits on his big behind while scrubbing the floor.

Buster Keaton does a pantomime of cleaning the window on a phone booth. Only there is no glass. Later he does something I have never seen him do in a movie. He busts out laughing when he pours mop water into a well-dressed man’s top hat. Still it is easy to see why he left Arbuckle and struck out on his own as he clearly plays second fiddle in all these movies. The title, after all, is The Bell Boy, singular, referring to Arbuckle even though Keaton plays a bell boy as well.

Arbuckle was fond of using effeminate men for laughs. In this movie a tall bearded man with the sinister look of Rasputin scares Buster and Fatty with his mere presence. Seconds later he starts mincing around and winds up playing patty cake with Arbuckle.

Arbuckle doubles as the hotel barber. “PAINLESS SHAVING OUR SPECIALTY” the sign on the wall reads. Fatty, demonstrating his creativity as both a comic and a barber, changes the swishy Rasputin looking character into a dead ringer for General Grant and then Abraham Lincoln.

You can tell this movie was made during the First World War. A sign on the wall of the hotel restaurant says, “FRENCH AND GERMAN COOKING”, only the “AND GERMAN” has been crossed out.

Fatty Arbuckle, Buster Keaton and Al St. John made for a classic comic trio and The Bell Boy is yet another silly, laugh-filled gem they created as a team. It builds to the inevitable frenzied slapstick climax where Fatty gets the girl and Keaton and St. John provide the crazy acrobatics that leave you breathless. 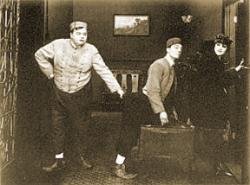 I agree with you Patrick. Keaton would go on to longer lasting fame because of the Arbuckle scandal, but at the time of this film's release, it is Arbuckle who is the star and I see no sign of any lack of creativity on his part. I do think though that he could have at least made the title to this film plural, as Keaton does have a larger part here than he had in their earlier shorts.

Patrick, you left out one more big piece of evidence that this film was made during World War I. When Arbuckle is shaving the Swishy character so that he looks like different famous people, the last person he shaves him to look like is the Kaiser, whom he then proceeds to slap repeatedly in the face with the shaving cream.

Keaton and St. John do throw themselves about quite energetically, but so does Arbuckle in his own way and quite impressively for such a large man. When Keaton kicks him in the behind, he does a very nice fall and complete somersault on the floor. It's nothing compared to Keaton's physicality, but then Keaton was much smaller and in much better shape.

As funny as the Keaton and Arbuckle shorts are, their weakness is their lack of a real story. They are simply a series of sight gags. For instance, the madcap antics in this short lead to stopping a bank robbery, with only the flimsiest excuse of Fatty wanting to impress the girl. Without a strong story there's never an emotional investment in the goings-on, no matter how much you laugh.

At roughly 20 minutes, this short is filled with enough laughs so that it just flies by. Having seen quite a few of the Arbuckle/Keaton pairings now, I have to say I found this one to be one of their more enjoyable ones. Either that, or the more of these I see, the more I'm learning to appreciate them.