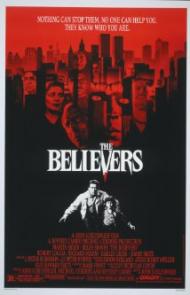 Malick Bowens in The Believers.

In 1987 John Schlesinger directed this neo-noir horror film adapted from the 1982 novel The Religion by Nicholas Conde. The subject is voodoo, or more specifically the religion known as Santería, a mix of Roman Catholicism and Afro-Caribbean religious rituals and traditions. In an attempt to not disparage an entire religion, in the movie the real villains practice an offshoot called brujería, which is Spanish for witchcraft. At any rate, The Believers was criticized by some for perpetuating negative stereotypes.

If you can look past that, however, this is a solidly entertaining thriller with a terrific cast led by Martin Sheen. He plays Cal Jamison, a therapist who moves to New York City from Minneapolis with his young son after the death of his wife. In the opening scene she is electrocuted in a freak kitchen accident that sets the tone for everything to come. Once in the Big Apple, Cal gets involved in an investigation after the corpses of several gruesomely mutilated young boys are discovered in what appear to be ritualistic human sacrifices. Of course Cal's own young son soon becomes the target of these crazies as the story heads towards its grisly conclusion.

Jimmy Smits plays a cop named Tom Lopez who discovers one of the young boy's dead bodies. Unlike Sheen's character he's a believer in black magic. He becomes hysterical with fear and mentally unhinged. He tell's Cal, “God can't save you, the Church can't save you. They get right inside your body, you can't stop them. The Seven Powers. You... you think that you can stop them? You think that science can stop them? Ohh... oh God. The eyes! I saw his eyes!”

The eyes he's referring to belong to Palo (Malick Bowens) (see photo). He is a very scary man. We first meet him at the airport. He breezes through security like Obi-Wan Kenobi getting past storm troopers, using mind control. Although it takes place in the real world – gritty graffiti splattered 1980's Manhattan - the script makes it very clear that black magic exists. That's where the horror aspect of the movie comes in.

The most famous example is when a makeup compact belonging to Jessica Halliday (Cal's new lady friend played by Helen Shaver) has a curse placed on it after she leaves it in a bathroom while she snoops around the bad guy's office building. After applying the makeup, her face breaks out in a small red sore that keeps growing until it covers half her face. It then starts draining pus followed by many little spiders. It's disgusting and creepy as hell.

The climax features one big plot twist that was foreshadowed in the opening credits sequence. As with many horror films the ending leaves room for a sequel, although none was ever made. For a brief time in the 1980s movies dealing in Satanism and voodoo were popular. Angel Heart (1986) and The Serpent and the Rainbow (1988) are two other examples. The plot here also shares some similarities with Rosemary's Baby (1968). The Believers isn't a great movie but it's a solid enough horror flick for a rainy October afternoon.

Helen Shaver has some complexion problems in The Believers

I for one am glad a sequel was never made. The ending of The Believers features someone doing something that they claim will make them safe but clearly means they are not. I have also never found Martin Sheen an interesting enough of an actor to inspire me to watch a film.

Some of the scenes Patrick mentioned are properly gross. I too found the spiders crawling out of the hole in the sore on Helen Shaver's cheek to be quite vulgar. Jimmy Smits having snakes bite their way out of his abdomen is shown off screen but the way it is depicted is enough to make you want to vomit.

Sheen, as Cal, basically walks through this film clueless of what is happening around him until it is almost too late. Malick Bowens has the look of a villain but he has less to do than I hoped. The rest of the bad guys, as Patrick hinted, are hidden in plain sight but are far less scary than Bowens. Cal ignores and pushes away the one person who understands exactly what is going on and is willing to help. Yeah, he is kind of a dumb ass.

Nine year old Harley Cross gets stuck wearing a loin cloth/thong at the end. Boy dressed like that in Tarzan because that was all that was available to him. Making this kid wear that when they are going to kill him, no matter what he wears, seems a bit pedo-ish to me. Cross would go on to a mediocre career in television and make some utterly forgettable films like, The Boy Who Cried Bitch (1991) and A Soldier's Daughter Never Cries (1998). As sad as it is, this was the height of his career.

The Believers is good for a few disgusting scenes but has very little else to offer.