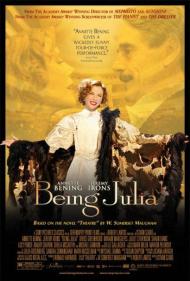 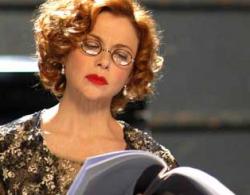 Annette Benning in Being Julia.

Being Julia is a great showcase for Annette Benning. Its plot is pure soap opera, but Benning imbues her character with such heart, soul, and humor that, despite a second act drag, your attention never wavers. And her final act triumph is the reason acting awards were invented.

Based on a novella by W. Somerset Maugham, it's set in 1930s London and Benning plays Julia Lambert, the leading light of the theater world. At the top of her game, with no further mountains to climb, Julia finds herself in a slump. The appearance of a young American admirer, with whom she has a passionate affair, seems to revive her lagging spirits. However, when her lover falls for a younger actress and then begs Julia to give her a part in her new play, Julia takes revenge on the young ingénue in a way that would have made Margot Channing, of All About Eve, proud.

The all-British supporting cast is superb. Jeremy Irons plays Julia's husband with whom she shares a platonic and business relationship, kept together more by respect and a shared history than real passion. Michael Gambon does a small turn as the ghost of Julia's old acting tutor. And relative newcomer Lucy Punch does a nice job playing the slightly ditzy blonde who has the misfortune of backstabbing Julia and then the temerity to step onstage with her. All of them however, take a back seat to Benning who truly shines in the role of stage diva.

While the performances are all good, the story itself feels stretched. The setup is fine and the final act is great, but the middle portion of the film goes on a bit too long. We know the big finish is coming and yet for fifteen minutes or so it feels as though the plot is just spinning its wheels. When the third act does start, with humor and pathos, it more than makes up for the dip, but it would have helped if the film's climax had happened a few minutes earlier.

As a platform for Benning, Being Julia is a tour de force. It's a four star performance in a three star movie. 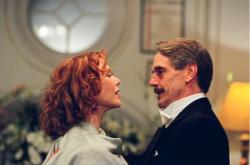 Annette Benning and Jeremy Irons in Being Julia.

To be believable as a legendary stage actress one must be able to ACT like a legendary stage actress. Not only does Annette Benning do this brilliantly she also expresses the woman behind the diva. We see her flickering moods, her insecurities and needs, her ego and ambition, and her sense of humor. She is a complete and fascinating person. And this movie works because of her. Everything else is window dressing.

I agree with Scott on nearly everything about Being Julia. The plot is pure soap opera but the characters are all more real and complex than what that suggests. The acting is all around inspired, the dialogue crackles with wit, and the time period is beautifully evoked. I love the fact that it revels in its old fashioned theatricality.

This movie runs less than two hours in length. I didn't notice any second act drag. While not a perfect movie (for that see the above-mentioned All About Eve) Being Julia is a bird of rare plumage in today's crass movie jungle.

Illicit sex and an expensive watch. Life is good for Tom.

For me their was not a second act drag. The entire movie was a drag. Without one person to like or care about, I was left bored. Sure Benning does the best movie diva since Norma Desmond, but she is only fun to watch, not empathize with.

The one character I found interesting was Tom. He starts the movie as a star struck fan of Julia’s. However, once he nails her, he becomes a gigolo of sorts. The once shy, wide eyed kid turns into a manipulative man whore. Benning so dominates this movie that Tom is never fleshed out. Was he just pretending to be nice or did the affair change him? The movie never gives him enough screen time to say.

Sure, Benning could have won an Oscar for this role. She is in most scenes and gets all the best lines. “Actually, he was a vet, he used to go to your house to deliver the bitches. Your house was full of them.” She tells a rude fan, who asked if Julia’s father was a doctor. After watching the extra’s on the DVD, I was impressed with Shaun Evans as Tom. The guy has a very strong Liverpool accent in real life. Often I cringe when some one from England plays an American, but Evan’s dialect was never an issue.

Being Julia is only kept afloat by Julia overacting whenever she wants to get her way. The problem is that she overacts so much and so often, that everyone around her gets lost in the screenplay. The role of her husband is utterly thankless. His affair is mentioned, but never shown. Her son shows up and dissapears quickly. I am not sure why Lord Charles is even in the movie?