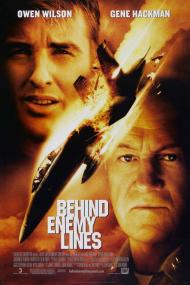 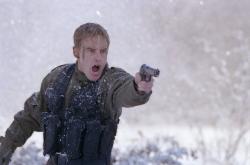 Owen Wilson in Behind Enemy Lines.

Based on true events, (sort of) Behind Enemy Lines is an overly dramatic action film. This movie is poorly directed and edited. This is amateur film making of the worst caliber.

Remember when the American pilot was shot down in Bosnia? He ate some bugs and worms. He avoided people and simply waited around the woods for a couple of days until the rescue arrived. That is the abbreviated true story. Behind Enemy Lines is about a pilot who gets shot down in Bosnia. He witnesses his copilots assassination. He runs all over the place, usually avoiding a spray of bullets. He is always around when something is blowing up. He is constantly on the run to avoid the bad guys, but that is just half the story.

Gene Hackman plays an Admiral on the same carrier that the pilot is stationed on. He attempts to launch a couple of rescue missions, but for some reason another Admiral keeps halting the mission. They have some melodramatic scenes fighting over the issue but it is never made crystal clear why they disagree.

The movie is fast paced and there is plenty of opportunity for action. It is just too bad that the director, John Moore, sucks! He is such a rank amateur here that he uses slow motion for dramatic affect. In one shot Owen Wilson is sitting on a mountain top talking to Hackman on his radio. The camera can't just let the dialogue and scene play out. The camera swirls around the mountain top dominating the conversation and scene. In another scene Wilson is sliding down some huge cement slab. It is possibly a dam. He slides down it for a while as he is being shot at. He stops himself by grabbing a pipe. The next time you see him, he is running through the woods. Both of my sons said in unison; "How did he get back up?"

This movie has the most obnoxious soundtrack ever. Too often it over emphasizes a scene. At one point Wilson is running through the woods to blaring rhythmic music. Suddenly the music and Wilson stop. He listens and hears something. He starts running again as the same music starts up again. Soundtracks are supposed to enhance a scene not dominate it. I recently re-watched E.T. It is the best example of how a soundtrack can add to the emotional experience of a movie. Behind Enemy Lines is the worst example.

Owen Wilson does a decent enough job. Of course all he really has to do is run around. Hackman has great presence but he is working with such a lousy director here that he never comes across very well.

The obnoxious finale has Wilson's pilot under heavy fire from 3 dozen soldiers. He is running away from them to jump off a cliff and catch onto a marine who is suspended on a rope from a helicopter. But wait, he forgot the disc so he has to run back for it then complete the jump. Lucky for this pilot all of the bad guys must have gone to the Storm Trooper's school of marksmanship.

What could have been an engrossing story is practically laughable. There could have been plenty of tension. There are many opportunities for suspense in a movie like this. If only someone who knew what they were doing could have been behind the camera.