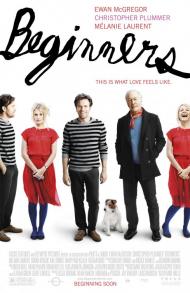 Christopher Plummer and Ewan McGregor (and Arthur) in Beginners.

Beginners is a semiautobiographical dramedy from writer/director Mike Mills about the last few years of his father’s life and how he dealt with his father’s death. Like the character of Hal (played with zesty relish by Christopher Plummer) Mike’s father came out of the closet as a gay man at the age of 75, following the death of his wife of 44 years. He was then diagnosed with cancer and passed away at 79.

Ewan McGregor plays the Mike Mills role, called Oliver for the movie. The story is told in a nonlinear manner with Oliver narrating the flashbacks, which include a few scenes of him as a boy with his mother. She was something of a free spirit that knew her husband was gay but married him anyway.

The movie has a quirky style including imagined conversations between Oliver and his father’s dog Arthur (Arthur’s thoughts are displayed like subtitles).

Oliver meets a young French actress and tentatively begins a relationship. Interspersed with these scenes are those showing Hal’s coming out process, his relationship with a younger man and his diagnosis of cancer and eventual death.

The scenes of Hal jumping headlong into the gay world are the most humorous and lighthearted this rather melancholy movie gets. He excitedly calls Oliver late one night to tell him about a dance club he has just been to where they play this amazing, pulsing music. “What kind of music do you suppose that was?” he eagerly asks his son. “Probably House music Dad.” Hal quickly writes it down. In another scene he gives his son a gay pride rainbow sticker while explaining its meaning.

Christopher Plummer deserves to win an Oscar for this role. He perfectly embodies the newfound freedom and excitement of a man being completely himself for the first time in his life just as his time is running out. He poignantly demonstrates the realities and disappointments of being elderly in the gay world and he deals with his impending death with dignity. It is a brilliant performance.

Ewan McGregor is good as well. The scenes between Oliver and Hal are the best moments in the movie. Oliver’s reaction to his father’s death will cause eye leakage to anyone with tear ducts. Together these two great actors have created a memorable and original father/son screen duet.

Beginners offers a unique take on the age-old relationship between a son and a father. It will make you smile, chuckle a bit, and most definitely shed a tear or three. 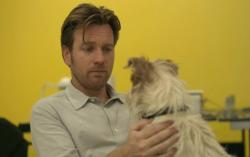 Ewan McGregor and Arthur the dog in Beginners.

Patrick, you used the appropriate word when you referred to this movie as "melancholy". In fact, if another movie hadn't already appropriated the title of Melancholia this year, this one could easily have taken claim to the name. There's a sadness that permeates nearly every aspect of this film, which isn't perhaps surprising when you consider that the central premise of it is a grown man coming to terms with his father's death.

Even the joy that Hal experiences at being able to express himself fully for the first time as a gay man is tinged with sadness. He's left it so late in life that as you say Patrick, he must deal with being an old man in a world that worships youth. Even the younger lover that he takes isn't monogamous with him. And yet, despite it all and through it all, he retains a sense of optimism and joy that gives him a kind of unflappable dignity. Plummer certainly deserves awards for his performance.

I do agree with you Patrick that McGregor and Plummer make a great father and son. Their scenes together are the heart of the movie. If you can watch Oliver's reaction to his father's death with out at least a lump in your throat than you are one cold emotionless fish.

Another source of light humor that helps to dispel the somewhat gloomy atmosphere is the dog Arthur. His subtitled thoughts are amusing as is the way Oliver treats him as a little human.

The Oliver and Anna scenes are fine and I think Melanie Laurent (Inglorious Basterds) is a good actress. Since this is a movie about Oliver coming to terms with his father's life and death rather than a movie about his father's life and death, their relationship is the catalyst that helps him do that. Like everything else in the film, it's touched with sadness, but it does provide some hope.

This is a well acted and touching film that is perfect for rainy afternoon movie viewing.

Oliver had some interesting parents.  His mother was a drama queen.  She tells a young Oliver to go into his room and scream, as it is cathartic.  He complains about some old music she plays on her record player but she tells him that it is black music and that, "Black music's the deepest because they've suffered the most."  When leaving an art exhibit she creates the excuse that, "Oliver's appendix has ruptured."  After the woman looks down at a calm Oliver, his mother adds,  "He is a very composed child."

I sympathized with but also respected Oliver's father, Hal.  He lived most of his life hiding/denying his gay desires.    He stayed with his wife till her death.  She, early on, hid and denied her Jewish heritage.  No doubt this leant her to understanding Hal's double life.

My favorite scene was when Oliver tries to tell Hal's boyfriend Andy, about Hal's illness.  Andy instead talks about sex and how Oliver should not be threatened by him. "What I do, most people wouldn't even call it sex."  It puts Oliver completely off the subject.

Beginners tries hard to be creative.  The dog's subtitles, the illustrations, photos and visual images are all there for humor and interest, but as my brothers wrote, it is the story of Oliver and Hal that you will remember most.  Anna shows Oliver that love can come later in life but like the skating scene, so much of their relationship could have been trimmed.  The movie drags at times making the point that connecting with someone can be difficult for everyone, no matter what their sexual preference or religion.

Ewan McGregor starred in my favorite father/son film Big Fish.  Beginners is not as entertaining as Big Fish, but it left a lump in my throat anyway.  Oliver accepted his father for what he was and isn't acceptance what we all want?