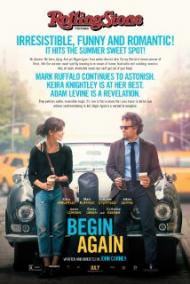 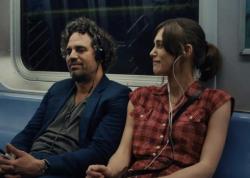 In a summer seemingly devoid of romantic films--comedy or otherwise--it would be nice if I could say that Begin Again steps in to fill that void. However, despite giving it a mild try, it really doesn't succeed. It ends up as blandly sweet as Kiera Knightley's over processed singing voice. Like her songs in this film, it's mildly nice, but won't stay with you much past the end credits.

Knightley stars as Gretta, an English girl who accompanies her boyfriend Dave (Maroon 5 frontman Adam Levine) to New York City when he lands a recording contract. Flush with success he soon ditches his old girlfriend and Gretta finds herself sleeping on the couch of a friend (James Corden). When her friend convinces her to sing one of her songs at an open mic night, she is heard by Dan (Ruffalo), a washed-up record producer who's doing the best he can to drink away his life following a separation from his wife and a decline in his fortunes. Liking what he hears, Dan convinces Gretta to record an album for him. The question then becomes--and the answer is so unapologetically obvious that I hardly need to ask it--can these two losers at life help each other get back on track?

The overall tone and theme of the story seems to be "niceness". Everyone is very nice to each other. Even Dave, who breaks up with his girlfriend after cheating on her, is apologetic about it rather than arrogant. Dan and his ex-wife are still on speaking terms and their daughter's rebellion is cured by a shopping trip and some fashion advice. There's very little conflict to be found in the film apart from Dan getting fired by his old partner, but even they seem to be able to make up easily.

And Gretta's songs also wallow in their niceness. They're rather generic singer-songwriter, acoustic songs of the type you might hear on an adult contemporary radio station and then forget by the time you parked the car. They're not particularly bad, but nothing special either. It's difficult to see exactly what Dan sees in them that makes him think Gretta could be a star, apart from the fact that she looks like Kiera Knightley.

Although the story hints at an attraction between its two leads, this isn't a romance. Their relationship remains platonic throughout. They are the two people they each need to help the other move through this phase of life.

The cast is the film's best asset. Knightley is cute as ever and plays the wronged young woman well. Ruffalo isn't allowed to give Dan the self-destructive edge that a darker film might allow him to have, but he's still decent in the role. He drinks and he smokes but in a nice, non-threatening sort of way. Still, they manage to play well off of each other. The supporting cast is filled with familiar faces, most of whom are under used.

With such a middle of the road movie, it's difficult to either love or hate it. It's mildly entertaining, but doesn't provoke a strong enough reaction of any kind. It's far too restrained and nice for its own good. 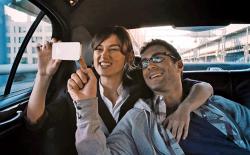 As a Maroon 5 fan, I was interested in seeing how convincing Adam Levine could play a pop star with a hot girlfriend. Yeah, his role is not much of a stretch and needless to say, he pulls it off adequately. I liked how when he first arrives in New York he wears glasses and looks a bit overwhelmed by his growing fame. When he returns from LA he is a changed man. He is dressed in black sans glasses, wearing a hipster hat. He seems more confident yet uneasy. Before he confesses, we know that he has not been faithful. With more of the right roles, Levine could easily move into an acting career. He sings a couple of songs but he is in the supporting role.

Whereas Levine was decent casting, Keira Knightley is not a singer. She whispers her songs, she does not sing them out. Gretta is the stereotypical musical “artist” who writes songs but argues that her look does not matter. “I think music is about ears not eyes.” Considering how weak her voice is, Gretta should put all kinds of work into her look. Madonna and Brittany Spears never sold a single song on their voice, and they sold shitloads of songs. Did anyone think to offer Adele this part?

Mark Ruffalo has slowly become one of my favorite actors. He is a natural in front of the camera and lets all his warts show, gray hair and love handles. His Dan is a flawed miserable drunk. He is not a good father to his teenage daughter. His best days seem to have passed until he meets Gretta and is reminded of the excitement of discovering and cultivating a new talent.

Gretta may be Dan’s salvation but Gretta is an annoying bike riding hipster. She hates that her ex-boyfriend sold out. Spoiler alert: Dan’s record company offers Gretta a deal to release her CD in which she would earn a dollar while they would earn 9. They would also provide her with publicity and remixes. She, of course, does not want fame so instead decides to release her album herself, on line, selling them for one dollar a piece. She could have helped Dan, who made the CD possible, earn some money but instead decided to go it alone.

The only interest I originally had in watching this film was a mild curiosity in seeing Adam Levine’s film debut. What I will take away from it is a confirmed hatred for hipsters and a confirmed appreciation for Mark Ruffalo. He comes across as authentic as hipsters come across as insincere.

Begin Again is practically a musical of sorts. It contains the Oscar nominated song, “Lost Stars.” My favorite musical moment though, was provided by Frank Sinatra and Stevie Wonder, heard during a montage scene. 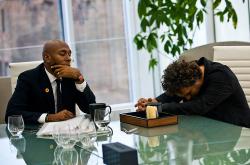 Funny you should mention it Eric because, according to Wikipedia, John Carney did consider Adele for the lead role - although they don't say why she was rejected. Scarlett Johansson was also briefly attached to the project. Either of those women would have been better choices for the role of Gretta James. Adele has yet to prove her acting chops but we know she could have sung the hell out of the Oscar nominated “Lost Stars”. Johannson has proven both her acting and singing talents. As for Keira Knightley, I've never been a fan and this movie did nothing to change my opinion – except that I now hope she never again attempts to sing in a movie.

But then I wasn't impressed with Adam Levine's acting either. Eric, you give him acting credit for a wardrobe change that he probably had little to do with. I disagree that he could easily move into acting. To me he seemed rather stiff and ill at ease in front of the camera. He should stick to his day job. He is certainly not any better than his fellow musicians-turned-actors Mos Def and Ceelo Green, neither of whom will win any acting awards anytime soon.

The one thing about Begin Again that I found to be funny was that despite the fact that this movie is set in the current world of the New York music scene it has a very old fashioned sensibility. Today's urban indie music scene is based on irony. To be cool one must display a consistently ironic attitude while making fun of anything that smacks of genuine emotion for being corny. But look at all the musical references made in the film. They are all pretty ancient and -for the most part- pretty corny. Judy Garland, Frank Sinatra, Stevie Wonder (even going all the way back to Dooley Wilson singing “As Time Goes By” in Casablanca) are mentioned or heard. Bob Dylan, Randy Newman, Carole King and Leonard Cohen are all referenced. None of this is exactly cutting edge stuff. And the idea of recording all around the city in iconic tourist spots is itself pretty cheesy.

I agree that Mark Ruffalo is far and away the best thing this movie has going for it. That and the city itself. The director makes good use of several out of the way places in Manhattan that you rarely see in movies, such as the Essex Street J train entrance near the Williamsburg Bridge. This low key drama/romance never drew me in. Scott summed it up best when he called Begin Again middle of the road, and that's death in the ever changing, youth driven music industry world in which this film is set.