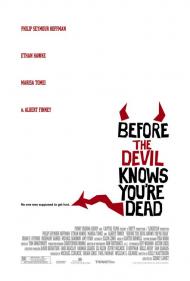 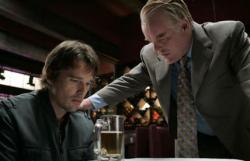 Ethan Hawke and Philip Seymour Hoffman in Before the Devil Knows You're Dead.

Before the Devil Knows your Dead is filmed in a very interesting style. The story is shown in numerous flashbacks from different character's points of view in a non-chronological manner. This method of storytelling is actually pretty cool, but by the end of the movie I was convinced that the main benefit derived from this style is that it covers some of the movie's weaknesses.

Ethan Hawke and Phillip Seymour Hoffman play brothers Hank and Andy, both of whom are pretty fucked up. Hank is broke, divorced, having an affair with his brother's wife and way behind on his child support. Andy is more successful seeming, he's got more money and a better job and he's married to the beautiful Gina (Tomei). He's also embezzling money to pay for his heroin addiction, is in debt to his eyeballs and of course his beautiful wife is screwing his brother. To solve both of their many problems, Andy suggests that they rob a jewelry store. He wants Hank to do the actual robbery while he will fence the goods. The catch to this robbery is that the jewelry store is owned by Hank and Andy's parents. And unfortunately for everybody involved, the robbery does not go smoothly.

My biggest problem with this movie is that underneath all the style and film tricks, I really didn't like or care what happened to any of these characters. They're all pretty despicable and I certainly wasn't rooting for any of them. Hank is apparently supposed to be the most sympathetic, but he's a spineless idiot who goes along with everything his brother says. Having said that, the acting is all first rate. Hawke and Hoffman are both excellent in their roles, I just didn't happen to like them.

One thing the story does have going for it is that I really didn't know how the movie was going to end. This might have partially been because I wasn't desperate to see these characters succeed or fail, but still, it bounces around enough that it will keep you guessing right up until the end.

Going into this movie the only thing I knew about it was that Tomei was getting good buzz for his performance. I guess that's just evidence that most film critics are men since while she does a good job, the most notable thing about her role is that she spends a good part of it in the nude. The opening scene is in fact a sex scene between her and Hoffman.

Great movies and awful movies are easy movies to review. Movies like this one, which fall somewhere in between, are the most difficult. If you're a fan of Hawke's or Hoffman's (or of Tomei's tits), then this is the movie for you, but you'd might as well wait to see it on DVD. 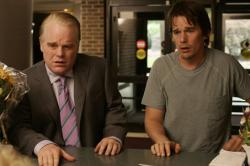 Philip Seymour Hoffman and Ethan Hawke in Before the Devil Knows You're Dead.

Scott, to me the point of this movie was the feeling of watching a train wreck. You know from the opening scene that this one isn't going to end pretty. It is the old "reap what you sow" metaphor brought to life. Scott, I agree that neither brother is likable or someone you want to root for, to me the hero is Albert Finney as the father. Like Lumet, Finney hasn't let advancing age dim his talent.

The direction is top notch. Sidney Lumet is well into his eighties and is the last director of his generation still cranking out movies (Rest In Peace Robert Altman). May Lumet continue to do so as long as he is capable of working at this level. The way the story is told is indeed interesting. The scenes add layer after layer to each character, and they get more and more fucked up as the movie unfolds.

I found the ending to be powerful. It is tragic but offers resolution in a satisfying manner. Scott, you've sold this one short. Before the Devil Knows You're Dead is a solid piece of work by all involved and a minor feather in Lumet's already crowded cap. 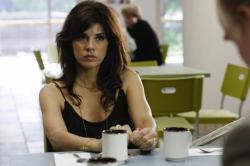 Marisa Tomei in Before the Devil Knows You're Dead.

I am not sure how long this movie is, but it felt like it ran on forever. The way the crap keeps piling up on these two brothers, you know all is not going to end well. The movie just seems to take far too long getting to that point.

Although Hank is a spineless idiot, I felt some compassion for him. Notice that his ex-wife and daughter live in a nice place, while he has a shit hole of an apartment. His ex is always berating him over past due support payments, yet her life is never shown suffering because of it. The only thing he has going for him is his weekly rendevous with his sister in-law and his daughter’s love. Actually his daughter comes across uncaring. Although, the scene where she calls him a loser over the phone does not ring true, it does make her a bit heartless.

In my life, I have met people with screwed up financial lives that came from wealthy parents. I never understood how they fell so far when they were born with such advantages. Hank and Andy are two such brothers. Both have lives that drain them financially, yet neither ever think to ask their parents for money or even a job working at the store, to earn extra cash for child support or a drug habit. Although these type of people do exist in this world I, like Scott, cannot muster any sympathy for them, and as such, did not care what happened to any of them.

The cast does a great job of fleshing these people out. It is credit to their talent, as the script merely hints at so much that is never shown. Just why does Andy feel like the outsider in his family. Why does Hank not have a conscience when having an affair with his sister-in-law? Finney gives another memorable performance. He really only gets screen time the last third of the film, yet he makes the most of it.

The script spends far too much time with other characters like the ex-wife, the drug dealer and the blackmailing brother. They just need to be mentioned, not elaborated on. The heart of this film turns out to be the dynamics of Andy’s relationship with his Father. Yet the film only gets to that point after wading through lots of unrelated garbage. This movie starts as a bank heist, then turns into a reap what you sow moral lesson, and then finally a father/son tragedy. This movie needed a better editor.