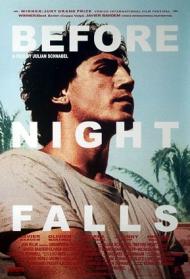 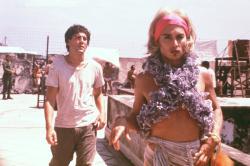 Javier Bardem and Johnny Depp in Before Night Falls.

Based on the memoirs of gay Cuban poet Reinaldo Arenas Before Night Falls is a consummate study in how creativity flourishes under the most oppressive conditions. Oscar nominated Javier Bardem gives an amazing performance. We are shown the poet's life from his childhood until his untimely death from AIDS at the age of 47. In-between he suffers discrimination and imprisonment under Castro's regime; finally escaping to live out his life in New York City.

Most of the movie he is an underground writer who, with the help of friends, smuggles his books to France where they are published. Incredibly poor as a child he is given help by wealthy people he meets who recognize his natural talent for writing. He gets a job in a library and becomes involved with the charismatic but disloyal Pepe. Later he is betrayed by Pepe and spends time behind bars. Nothing, however, stifles his desire to write. Like so many others before him, Oscar Wilde and The Marquis De Sade to name two, the time in jail only increases his determination to write.

Beautifully filmed and appropriately poetic in style Before Night Falls manages to uplift through its tragic story of the human spirit prevailing over adversity. Javier Bardem never falls into the trap of showing Reinaldo as super human. He is simply a man with a mission, complete with fears and limitations but never short on hope and whimsy. For the record he should have won the Oscar.

Johnny Depp and Sean Penn both have small roles as men he meets on his journey. Still this is a one-man show from beginning to end and it is never boring. Bravo Javier!!!

Javier Bardem in Before NIght Falls.

Javier Bardem does do a great job in the lead role, carrying the movie from beginning to end. However, the movie as a whole isn't as good as his performance. It runs long and could have been trimmed to allow the pace of the story to unfold quicker. There are too many scenes of life in Cuba that help with the atmosphere, but do little to help the plot.

The greatest overriding emotion the movie carries is sadness. Reinaldo, while finding joy as a young man when he is just beginning to write and discover himself, endures imprisonment and tragedy throughout most of the rest of his life. Revered as an artist, he is never allowed to live a life of freedom or luxury. Even after his escape to America, his life is still one of poverty and deprivation. And the tragedy of his death so soon after finding the artistic freedom he so long sought is heart wrenching.

As a character study of an artist and as an example of how oppressive societies can bring out the greatest works of art while trying to crush and control its people, Before Night Falls works. As an entertaining movie, it falls short. 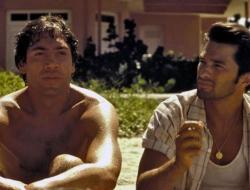 Javier Bardem and Olivier Martinez in Before Night Falls

One of the greatest foundations of the United States is the freedom of speech.  People have the right to publicly question George W Bush's motives for invading Iraq and the WMD's that never appeared, or President Barack Obama's birth certificate, that took three years to magically appear.  In some other countries you could be arrested for calling into question a leader's validity.  A person has lost their most basic human right when they must get another's approval to verbally or literarily express themself.   Arenas's story is one of a person who, by his own determinations, spoke out against an oppressive government, and paid heavy because of it.

Javier Bardem is brilliant in the lead and deserved all the accolades he received.  He portrays Arenas as a very self controlled person with only slightly feminine mannerisms.  Note the scene when he is trying to leave Cuba and the official asks him such questions as where he picks up men and what are his favorite sexual positions.  He seems most put out though, when he is asked to walk around and have it judged to be gay, as if that alone is the deciding factor.

As remarkable as Arenas's life was, this movie moves along at a snail's pace.  I disagree Patrick,  this film does contain some boring elements.  As Scott wrote, Schnabel seemed bent on showing the atmosphere and Cuban culture.  Sure this takes place in a particular locale and time in history but the message is universal.

Arenas spoke out against Cuban politics and society.  This made him a political criminal.  He wagered freedom of speech above other bets.  My favorite quote by Reinaldo Arenas  is. “I have always considered it despicable to grovel for your life as if life were a favor. If you cannot live the way you want, there is no point in living.”

Arenas took those words to his grave.  He was diagnosed with AIDS in 1987.  Safe sex was a mantra at the time that he apparently ignored.   He chose to express himself politically, socially and sexually.  He lived his life as he wanted to and ended it on his own terms as well.   Instead of letting AIDS take him, he decided to make his own appointment with God by committing suicide.  He even wrote his own brilliant epitaph.

"A bad poet in love with the moon,
he counted terror as his only fortune :
and it was enough because, being no saint,
he knew that life is risk or abstinence,
that every great ambition is great insanity
and the most sordid horror has its charm."