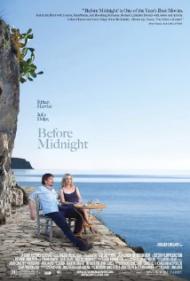 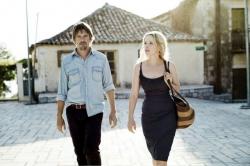 I'll start this review by admitting that I've never seen Before Sunrise or Before Sunset, the first two films in this series. I'll also admit that having seen this one, I have no interest in going back and doing so.

In place of a plot, this film has a running conversation, mostly between its two lead characters, Jesse and Celine, played by Ethan Hawke and Julie Delpy. They are a middle-aged couple in a long term relationship. Enough of their background from the first two films is covered so that viewers like me are brought up to speed. In 1994, they met on a train and spent a romantic night together. Jesse wrote a book about it and nearly 10 years later Celine sought him out only to discover that he was married and had a son. Now, 9 years after that, these two are a couple living in Paris with twin daughters. The setting for this film, however, is Greece, on the last night of a six week summer vacation.

Although it feels as though much of this film was improvised, director Richard Linklater, Ethan Hawke, and Julie Delpy have stated in interviews that they all wrote the script together and rehearsed it intensively. The result has earned the three of them an Oscar nomination for Best Original Screenplay. To their credit, they have scripted dialogue that sounds for the most part as if this longterm couple is having a conversation rather than speaking lines. Sure some of it is pretentious conversation, but then these are pretentious characters.

Jesse and Celine are at another crossroad in their relationship. This time it is a case of the passion of their youth having faded and certain resentments having settled into their routine. Celine is a feminist with first world problems complaining about centuries of female repression in lieu of real problems of her own. She seems to resent Jesse's writing, blaming him for the lack of creativity in her own life. Jesse, meanwhile, is upset about missing much of his son's (from his previous marriage) life and implies that he would like to move to Chicago to be closer to him, which is something Celine clearly doesn't want to do. What is intended to be a night of romance instead turns into one long argument.

In favor of this movie, I will say that it is well acted. Hawke and Delpy are easy to believe as a couple. Like any couple who has been together long enough, they have a shortcut way of speaking to each other and each knows what the other is thinking or means by a few simple words. The dialogue reinforces this intimacy. It is this realism that makes the film seem improvised. Linklater shot many of their scenes in one long take, going minutes and minutes without a cut. This too adds to the naturalistic feel of the film.

Having said that, I also have to say, who cares? I certainly didn't. This movie is as entertaining as watching a pair of strangers argue, which is exactly what it is. Perhaps if I'd seen the earlier films it might have felt like watching old friends argue, but then that doesn't sound any more entertaining. It's not even as if this couple is that likable. Both of them seem like very selfish people. Jesse's concern about his son is more about how Jesse is missing his son rather than any damage his absence might be causing his son. Celine, who constantly insists that she does nothing but care for others before herself, seems concerned only with herself. I had a hard time caring about whether or not this couple ever reconciled.

Although it feels true to life to a certain extent, I would have preferred to be entertained.

Like my brother, I'd never seen the first two movies in this trilogy. Unlike my brother, I rather enjoyed this movie and will seek out Before Sunrise and Before Sunset to watch and review soon. Even without having seeing the first two installments, however, I felt as if I was spending time with old friends. The entire movie is like eavesdropping on their private conversations, which consist of three main sections.

The initial conversation happens in a car as this long-term couple discuss their children, Jesse's teenaged son, and Jesse and Céline's twin daughters who are asleep in the backseat. A few sensitive issues are tiptoed around but the conversation remains, for the most part, congenial. This scene is done almost entirely in one long take.

The second section is a stimulating dinner conversation with friends. I assume this is the scene that Scott found pretentious as they toss around several intellectual ideas as they down glasses of wine. In my own experience these types of conversations always seem to gain in profundity in direct proportion to the quantity of alcohol imbibed.

The third, and longest, section consists of just the two of them. As Jesse and Céline stroll towards their hotel (see photo in Scott's review) they reminisce about the past and imagine what it will be like growing old together. Once in their room they begin to romantically make love. But, just as in real life, it only takes one perceived wrong remark to start an argument. This disagreement quickly escalates into a full blown fight that climaxes with Céline storming out of the room.

Yes Jesse and Céline are flawed human beings but then aren't we all? And they are both oh so real. They are much more believable as a long term couple than most movie lovers. Their arguments seem all the more realistic because they are sometimes glib and often petty. That's how people argue. The script does indeed sound spontaneous and unrehearsed. It is well deserving of its Oscar nomination.

Ethan Hawke and Julie Delpy are wonderful as Jesse and Céline, and Before Midnight is an astonishingly honest celebration of what it means to spend your life with someone. I hope they revisit these characters in another nine years.

Julie Delpy and Ethan Hawke in Before Midnight

I am with Patrick on this one. It is not at all about whether or not we like Jesse and Celine, but how much we see ourselves and others in them. Jesse and Celine are flawed as all human beings are, making them both very recognizable. Through their conversations/arguments we see a believable long term couple having problems in their relationship.

I disagree with Scott about what the issue is this couple is having. None of their problems stem at all from,”…a case of the passion of their youth having faded…” Scott is right about suppressed resentment having recently surfaced in their life but it has nothing to do with Jesse's writing or any lack of creativity in Celine’s life.

Their problems are very basic and logistic. Jesse regrets not having always been there for his son while Celine worries that he blames her for it. She feels that he has taken her for granted over the years, as almost every woman does who has ever washed her husband’s underwear. They are at a crossroads. If Celine does not take the job in Paris and moves to Chicago, Jesse knows that Celine will bring that up during some future argument. If they do not move to Chicago, Celine knows she will have to live with a man who will forever blame her for any issue he may have with his son.

As with all arguments, other subjects slip in and out but the real issue remains that this couple has a decision to make that will affect the rest of their lives. Neither Jesse nor Celine is entirely in the right or wrong and both characters have obvious flaws. Jesse is an arrogant asshole. He constantly corrects Celine’s grammar. She likes to bottle up her anger and manipulatively brings up issues from years before that are not directly relevant to the situation at hand.

The good news about this couple is that, even though they have issues, they know each other so well that a compromise is possible. On the surface, Jesse and Celine may seem to have a romantic life, living in Paris and vacationing for a relaxing six weeks in Greece, but they are not a unique couple. I loved the scene at the dinner table where we see the young couple in the blossoming of their relationship and the wise widow acting as bookends to a love story that Jesse and Celine are currently in the middle of.

From what I observed here; Jesse and Celine have the love and yes, the passion, to make it past this crossroads. No doubt it will involve many more conversations but I am confident they can make it work. I look forward to visiting with them in another 9 years and seeing how it happened. 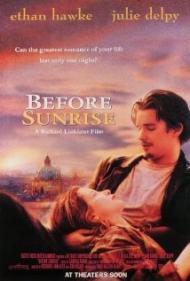 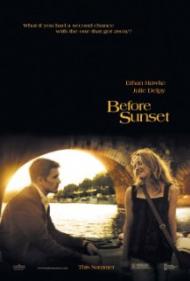