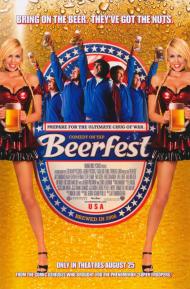 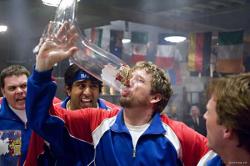 After a brief and not so successful attempt at mainstream movie making with The Dukes of Hazard, The Broken Lizard comedy troupe has returned to form with Beerfest. If you enjoyed either of their earlier films, Super Troopers or Club Dread, you will certainly enjoy this installment of their loopy and very silly brand of comedy. Just be sure to lower your brow before entering the theater.

This time around the group finds themselves involved in a top secret European beer drinking contest. When brothers Jan and Todd travel to Germany to inter the ashes of their grandfather (Sutherland in a cameo appearance), they discover that when he left the old country it was in disgrace and with the family beer recipe. When they are roundly beaten and humiliated in a beer drinking contest with their German cousins, they decide to return to America, build a team of beer drinkers and return the following year to exact their revenge.

Most of the film is centered around the building of the team,all made up of the other members of The Broken Lizard group, and their extended training at drinking beer. Landfill is a big, brash beer drinking juggernaut, Fink is the scientist whose day job is masturbating frogs to collect their sperm, and Barry is a former drinking games champion, now making a living as a street hustler following an unfortunate incident with a ping-pong paddle. Together they come up with just about every conceivable means of ingesting beer they can imagine. All in the name of their sport, of course.

The humor is very sophomoric, mostly involving beer and breasts, but hilarious, nonetheless. During a fight early on in the movie, a girl is shoved backwards where she grabs the girls shirt behind her, pulling it off, and then that girl falls backwards ripping the shirt off of the girl behind her, and so on and so on. In an inspired bit of casting, Cloris Leachman stars as a German grandmother with a suspect past. "I've had lots of things shoved up my ass," she tells Barry at one point. "Get over it."

Although every member of the group elicits laughs, it is Jay Chandrasekhar as Barry who is again the funniest of the group. His introduction scene and the scene where we see what he thinks he's like while drunk and what he actually is like are two of the funniest moments in the movie. He also, as usual, directs the movie as well.

Dirty, silly and juvenile as this movie is, it's also the funniest movie of the summer. 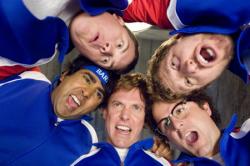 Beerfest has the mentality of a drunk college student, (the more I drink, the more fun I will have) and the plot of a stereotypical sports movie. (Lets get a team together, practice a lot and win the big one) Despite it's approach, Beerfest delivers some laughs. All jokes are related to beer or sex. Unless you have never gotten drunk or been around idiots who are, you will get and enjoy most of these jokes.

My favorite scene is at the funeral when Great Gam Gam lets the secret of her past out. Scott mentions her line above. Prior to that line, Barry tells the group about how he can no longer play a ping pong drinking game because years ago a ping pong paddle was shoved up his ass, and not the handle. "I've been shitting pancakes ever since." At the end of this scene another member of the group says, "Well that was a lot to digest."

I also liked the German drinking team with Saturday Night Live alumni Will Forte and lead by Jurgen Prochnow. The movie can't stop making references to his German made, doomed submarine film, Das Boot. In one scene, they are in a submarine and Prochnow says he once had a bad experience in a submarine. The big drinking challenge at Beerfest is when they have to drink out of a large boot shaped glass called Das Boot.

From my own experience, most of the fun in getting drunk is watching the other people drinking with me do stupid things, because as Chandrasekhar's beer goggles scene proves, I'm really cool when I drink. It's everyone else around me that acts stupid. 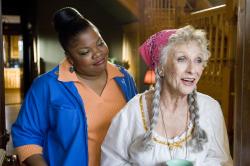 Mo'Nique and Cloris Leachman in Beerfest.

Broken Lizard is quite a talented comedy troupe. As a fan of both them and beer, this movie seemed right up my alley. As both my brothers pointed out it is very funny in an inebriated fratboy manner. The jokes are of the decidedly silly and vulgar variety.

I too cracked up at Barry's drunk sex scene. Although neither Scott nor Eric mentioned her, Mo'Nique is hilarious in this movie, but particularly in this scene. She is a fearless comic that isn't afraid to go there! “How many licks does it take to get to the center?”

Cloris Leachman steals all her scenes as Great Gam Gam. “I always sleep better with a little sausage in me.” This is her funniest part since High Anxiety.

Beerfest runs a bit long but it maintains an impressively high rate of jokes and gags throughout. In one scene a naked Jay Chandrasekhar as Barry wakes up in a field with blood all over his face and a dead deer with its throat ripped open next to him. He exclaims, “Oh no, not again!” before quickly running off. Thus far in their movie careers Erik Stolhanske remains the only Broken Lizard member who has yet to do a nude scene.

Beerfest is a blast!