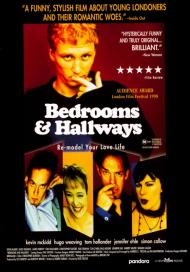 Bedrooms & Hallways is a 1990s London set sex farce that attempts to poke fun at the fluidity of human sexuality. Many of its characters behave bisexually at different points in the story. Independent American film maker Rose Troche has crafted a uniquely funny film from a screenplay by British writer Robert Farrar. The movie seems to suggest that human sexuality is not always fixed and that some people are capable of having satisfying sexual relationships with members of both sexes. This is all well and good for a silly situational comedy, but in real life I've yet to meet anyone -gay or straight- that behaves like the characters do in this movie.

The cast is likewise made up of residents of the British Isles. Several of whom were on the cusp of stardom at the time. Hugo Weaving was soon to land roles in two huge movie trilogies, The Matrix and The Lord of the Rings. Kevin McKidd and James Purefoy have both since gone on to successful careers in movies and on television. These two straight actors play love interests here, and they would famously costar together several years later in the HBO miniseries Rome. In DVD commentary for that show McKidd described the experience of kissing Purefoy as “unpleasant.”

The movie begins with a surprise 30th birthday party for Leo (McKidd) thrown by his flamboyant roommate Darren (Hollander). Leo's a single gay man who, it turns out, has had surprisingly complicated relationships with several guests at his party. In flashbacks we see how these relationships came about before returning to the party for the film's final, disappointing, 20 minutes.

Leo meets a handsome heterosexual Irishman named Brendan (Purefoy) when he accompanies a straight coworker (Fulford) to a Men's Group meeting run by a New Age couple played by Simon Callow and Harriet Walter. Leo is instantly smitten. Things get complicated when he reveals his secret crush to the group and a few unexpected reactions ripple hilariously to the surface.

A subplot involving Leo's roommate's sex life is worth a few laughs. Darren is sleeping with a kinky real estate agent (Weaving) who likes to have sex in the houses he is selling. This leads to one of the funniest scenes when they get a visitor in the middle of a tryst and Darren is left handcuffed naked to a bed. He tries to convince her he's really just an S&M-ogram worker who got the wrong address. The woman, Sally (Ehle), turns out to be Brendan's ex-girlfriend as well as Leo's high school sweetheart!

As a silly sex comedy that explores human sexuality in a lighthearted nonjudgmental manner, Bedrooms & Hallways works. My only problem is with the ending. It tries too hard to wrap things up neatly with a bow. And what's worse, it pairs people up in a seemingly random fashion that neither makes sense in the context of the story nor is satisfying from an audience perspective. This might not ruin all that came before but it does mar the picture. This movie does make light of sexual preference as if it were some reverse switch on a drill that a man hits when having sex with the same or opposite sex partner. We have heard of “straight” men who indulge in gay sex in prison and those “gay for pay,” “straight” porn actors, but I too have never met anyone who behaves like the characters in Bedroom and Hallways and as such never really found any of these people at all sympathetic or realistic. As this is a comedy, realism was not necessary but as Patrick wrote, the way it pairs everyone up is not completely satisfying.

At first I liked Terry and the men’s support group that provides some of the films best laughs. These men spend time together sharing their feelings and getting in touch with themselves. Terry, a seemingly straight man becomes jealous when Leo reveals that he finds another man in the group attractive and it is not him but Brendan. Terry suddenly seems left out and reveals at the next meeting that he bought a gay porn magazine and masturbated to it. I found it hilarious that this guy was so desperate to fit in that he would do such a thing, but then we find out that he is actually gay, making Terry no longer funny but pathetic.

The main character, Leo, is the least entertaining person on screen. He is in love with Brendan who Leo, at first, thinks is straight but as this movie is a gay fantasy, is just deep in the closet. Leo has little personality but his friends Darren and Angie are very flamboyant. They give him such advice as, “Rub some compost in your face, straight boys love it.” And “Leo, you are a strawberry blond. You can't go out with an ash blonde. It's not right!” Their reaction to Leo telling them that he had straight sex had me laughing.

I know this may come across as a bit homophobic, but this movie was too gay for me. Calm down. I did not mind, in the least, that this film was filled with gay characters but the resolution to everyone’s love life was none too entertaining. I would have liked a scene where the men’s group supported Terry’s heterosexuality, telling him it’s okay for him to like women. The only straight member of the support group leaves in frustration when he learns all the others are gay. My favorite joke in the entire film is when the feminine acting men’s support group leader has sex with the lesbian looking woman’s support group leader and she says right afterwards, “I love being a woman, not because of you but because of me.”