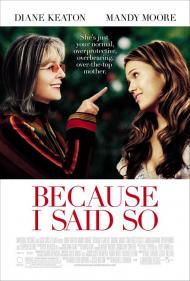 Because I Said So is a shameless chick flick about the relationship between a meddling mother and her daughter. It also demonstrates the double standards between women and men.

Daphne is approaching her 60th birthday and wants nothing more than her youngest daughter, Millie, to find Mr Right and get married. She uses a very extensive personal ad and then interviews prospective suitors in a restaurant. All are gross and ugly until Mr Perfect, Jason, sits down. He is good looking, educated and rich. Watching these proceedings is a musician, Johnny, who invites himself to her table for an interview. “Oh, please. I am not setting my daughter up with an attractive, charming musician who will just break her heart.” Daphne tells him. Can you guess already who Millie will end up with?

Millie begins dating, and sleeping with both men, without the men knowing she is dating the other. She cannot decide which is her future life partner. The movie spells it out so clearly that I wondered how young the writers, who wrote this, were? In one scene Millie breaks something of Jason’s, who gets angry. The scene then goes to Millie breaking something at Johnny’s home, who just laughs it off. Sure, most romantic comedies are obvious from the get-go. You can always tell who will end up with who fairly early on, but this one acts as if it is some kind of mystery.

Daphne and her daughters talk often about sex. Early in the movie they discuss circumcised penises. Later, while Millie is on a date with Jason she gets a four way call from her mother and two sisters, where she informs them that, “I think he might have a hot-dog with a bun.” Another conversation is about multiple orgasm, “I swear, by the third time I was so loud car alarms were going off and dogs were barking.” Daphne later tells Millie that she never had an orgasm with her father, because her father said he did not have the time and worked nights.

What struck me about this movie is that these women can act completely sexist and disrespectful, yet still come off as charming. Men do not talk about their wives genitalia. Men do not give details about the orgasms they have with their wives, and at no point would a father ever even think of telling their sons about their mothers sexual shortcomings. If any man ever said “You know son, your mother just never gave me good head.” He would be considered a vulgar, impudent pig, but a mother telling her daughter that her father never sexually satisfied her is cause for bonding? Lastly, what movie could possibly be made where the male lead, leads two different women on, while sleeping with them both and still come across as likable?