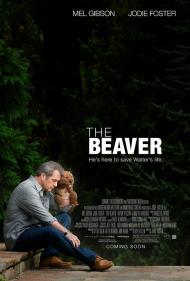 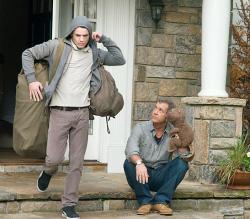 Anton Yelchin and Mel Gibson in The Beaver

I admit it. The only reason I watched The Beaver was out of curiosity. I wanted to know why was Mel Gibson walking around with a beaver puppet on his hand? As South Park's "The Passion of the Jew" pointed out, Gibson has often come across as crazy, but a beaver puppet?

Walter Black is a very depressed middle aged man. He spends large amounts of time sleeping and avoiding his wife and two children. He barely speaks to anyone. His business suffers. Frustrated after couple's therapy and her patience prove unhelpful, his wife Meredith forces him to move out.

While staying in a hotel, Walter finds a beaver puppet. He puts it on his hand and it becomes a character of its own. The beaver becomes Walter's spokesman. Through it, he is able to talk to his wife and sons. He never takes the beaver off. He addresses people through the beaver. He does the talking but the beaver's mouth opens and closes. With the beaver, he is able to get back to work and reconnect with his wife and youngest son.

His oldest son, Porter, is having his own issues. Around school he is known as the go to guy to pay for writing reports and stories. He apparently has the ability to write papers as if they express the opinions of the supposed author better than they themselves can. Thus Porter lives through other people, who really have no interest in him as a person.

It is within the relationship between Walter and Porter that the film is most interesting. Although Porter dislikes his father, he likewise has issues with expressing himself. He is the only person not willing to talk to the beaver. He really needs a father to talk to but is scared to death that he is just like him.

This is a dark film. At first the beaver seemed to bring Walter out of his shell but he eventually becomes so dependent on the beaver that it threatens to destroy everything in his life. This film suggests that depression and insanity go hand in hand.

Although his acting has never been the first thing people think of when talking about Gibson, he pulls off the part very well. If anything, his personal demons allow us to more easily accept him in the role of someone mentally off. Yelchin acts well enough, but never good enough. That is, he can go from point "A" to point "B" as directed but he never makes the journey interesting for the audience. I was never completely drawn into his problems.

The film's biggest weakness though, is that we never discover why Walter was so depressed to begin with. A detailed back story never comes to light. We are just told that he is depressed and we must accept that he is. The relationship between Walter and Porter never gets to that emotional moment I expected and the characters needed. I watched The Beaver out of curiosity, but will remember it as a disappointment.

Mel Gibson in The Beaver.

The weakest aspect of this film isn't that we never discover why Walter was depressed to begin with. Depression is a disease and often a hereditary one. If Walter began the movie with cancer, would anyone waste time wondering why he had it? Depression isn't feeling sad because something bad happened. It's feeling nothing whether something good or bad is happening. In that respect this film actually does a good job of representing depression.

I do agree with Eric that Gibson is quite good in the lead role. Yes, his personal life has overshadowed his acting career and even before that he too often rested on his fame in big budget action films, but once upon a time he was a serious actor and he proves here that he still has talent. He talks to himself in the form of a puppet for much of the movie, using what sounds like a Ray Winstone impersonation, and yet instead of seeming silly, it seems sad and dramatic. That's a testament to Gibson's acting ability.

It's interesting who Hollywood chooses to ostracize. Roman Polanski skips the country after having sex with a child and he's still considered an artiste feted by Hollywood. Gibson makes sexist, anti-Semitic remarks while drunk and he's persona non grata. I guess in Hollywood it's better to be a pedophile than a racist. In both cases though, it goes to show that you don't have to be perfect to make art.

The weakest aspect of the film is that it never retains a tight enough focus. It tries to fit too much into its 90 minutes. As Eric mentioned, the heart of the story is the relationship between Walter and his oldest son, Porter. It's clear that Porter has inherited at least a portion of his father's mental state and he's trying to rebel against it. That's where the story should have stayed. Instead the film brings in two extraneous storylines with the bestselling beaver toy, which is the script's most unrealistic portion, and Porter's girlfriend. Both of these sections should have been trimmed drastically. Although, if the film had come out only a year later, I'm sure the girlfriend section would have been expanded as she is played by the white hot Jennifer Lawrence. Lawrence does a decent job, but Porter's relationship with his father is more important than his relationship with her.

I also agree with Eric that Yelchin doesn't bring much to the table. He's good enough, without being great. A more charismatic actor could have brought some spark to the part. He's easily the weakest acting link in the film. Foster, who also directed, brings more to her underdeveloped part as the wife and mother than Yelchin does to the more heavily written son.

As Eric wrote, there's an intriguing idea at the center of The Beaver. It just never pulls itself together enough to match its premise, despite a raw and brave performance by Gibson.

Mel Gibson, Jodie Foster and the beaver in The Beaver.

The Beaver attempts to make a serious statement about clinical depression. Despite a valiant effort by Gibson the movie fails. Whereas Eric wanted more info on Walter's backstory, I found the conclusion to be a bit unrealistic and far too pat. I don't want to spoil the climax but Walter's method of purging himself of the beaver is certifiably insane. One of the most clear-cut symptoms of which is being a danger to yourself or to others. Walter's actions certainly qualify.

I agree with Scott that the subplots involving the beaver toy and the oldest son's girlfriend sink the story. The success of the beaver toy and Walter's subsequent media celebrity seems gimmicky, and I never bought Jennifer Lawrence as a graffiti tagger. Only when the focus is on Gibson and the hand puppet does the story work.

But even then it isn't really compelling enough for a feature length film. Only in a movie would a man's mental illness turn his failing company into a robust success. Clearly this man needs medication more than an interview on the Today Show.

Kudos to Mel Gibson for taking on such a strange role. He is never less than interesting to watch. His face and entire countenance drip with a pain so tangible you feel as if you can reach into the screen and touch it. He alone nearly pulls off the rather ridiculous storyline. Jodie Foster is a great actress but all she is allowed to do is express concern for the well being of her husband and children. She has that worried look down pat but it makes her character one-dimensional. Her direction is adequate but not exceptional.

As for the older son and his girlfriend, their section of the film is downright hokey. The scene where she calls to show him the graffiti painting she made about her dead brother seems contrived. As does her valedictory speech at the end. It tries to be profound but winds up sounding platitudinous.

Like Eric, I began this movie with a sense of expectant curiosity. I ended it feeling let down.