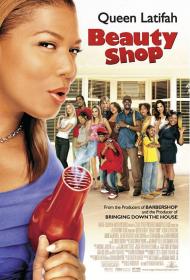 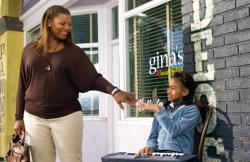 This estrogen heavy spin-off of the Barbershop movies is formulaic but funny. Queen Latifah is enjoyable as always and she is surrounded by a talented and diverse group of supporting players. Sure every plot device is a worn-out relic but the cast seems to be having such a good time that the fun is infectious.

Latifah is Gina recently moved to Atlanta from Chicago. She cuts hair for the flamboyant and conceited Jorge (Kevin Bacon) but dreams of one day having her own beauty shop. After a particularly heated argument with her boss Gina quits and with the help of a bank loan (which she gets after giving an impromptu styling session to a woman at the bank) she opens her very own shop.

After a somewhat slow beginning the comedy starts to gel. The cast of characters are what makes the movie work. There are the wisecracking hair stylists that Gina inherits with her new business. Alfre Woodard is particularly good in a rare comedic role. Alicia Silverstone is Lynn the token white girl whom Gina brought with her from Jorge's where Lynn was only allowed to give shampoos. Andie MacDowell and Mena Suvari are upscale clients that Gina lures away from her old boss's shop. Keshia Knight Pulliam (little Rudy from The Cosby Show) shows that she is indeed all grown-up now. Djimon Hounsou is under-used as Gina's love interest. He plays an electrician/musician that lives upstairs from the beauty shop.

The strictly by the numbers plot doesn't detract from most of the laughs. The scene where Gina and her crew go out for a few celebratory drinks is hilarious. Alicia Silverstone trying to dance like a hootchie had me cracking up.

Good for some laughs but don't expect plot originality.