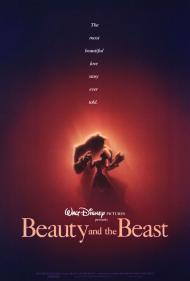 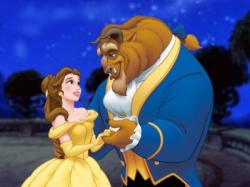 Paige O'Hara voices Belle while Robby Benson provides the Beast in Beauty and the Beast.

Beauty and the Beast, the best of all the Disney cartoons, and therefore the best of all cartoons, and the only full length animated feature to ever be nominated for a Best Picture Oscar, is a sweet and beautiful movie which can safely be enjoyed by anyone, child or adult alike. It tells the story of a young prince who is turned into a beast due to his coldness and selfishness. He has until his 21st year to both love and be loved in return, if he can not, than the spell will never be broken and he will remain a beast forever. Enter young Belle, the beautiful and highly independent young girl, who stumbles across the Beast's enchanted castle while looking for her father who has gone missing. Finding him in the prison of the Beast, she sacrifices her own freedom so that her father might go free. Left alone with the Beast, she discovers that perhaps he's not so beastly after all, while the Beast begins to understand the true nature of love.

Filled with magical songs without a clinker in the bunch, Beauty and the Beast is not only one of the most successful cartoons of all time, it has to be one of the most successful musicals as well. And deservedly so because the real emotions of this movie, as in all good musicals, are expressed through these wonderful songs. Belle expresses her longing for 'adventure in the great wide somewhere' and the enchanted members of the Beast's household speculate that love might be blooming when they sing, 'There must be something there, that wasn't there before'. And of course who doesn't remember the classic song which begins, 'Tale as old time, true as it can be'.

Very little has been changed or added for this new IMAX release which is both a plus and a minus. I was worried that they might add some gimmicky scenes for the movie, just to show off that it was on an IMAX screen, but fortunately they restrained themselves. The only addition is another song, entitled 'Human Again', which is sung by the enchanted staff of the castle. It's a humorous song, which has appeared in both the Broadway Musical and the Disney on Ice version, but which had been cut from the original movie, before production had even begun. Apart from that one scene, the only changes I could detect, was some extra detail work added to characters in the background of scenes. Unfortunately, this wasn't done enough, and in some scenes when the main characters are in the background, they don't even look like themselves. This is especially true of the Beast, whom, when a long ways away, shows very little of the detail and looks smaller and much less menacing. So while I was happy to be seeing this movie again, I can't say that the fact that it was in IMAX format, really added much to it's appeal.

The 1991 nominees for Best Picture were as follows; Silence of the Lambs (the winner for that year), Beauty and the Beast, Bugsy, JFK, and The Prince of Tides. If re-released today, Silence of the Lambs might draw some attention, although I don't think it would live up to people's memories and did not deserve to win so many awards, Bugsy and JFK? Not bad movies, but who would go see them? The Prince of Tides? Ok, Ok, so the Barbra freaks would line up, (with my brother Patrick at the front of the line), but apart from them? The one true classic out of all of those nominees, is Beauty and the Beast. A tale as old as time, and a tale that has/will stand the test of time. 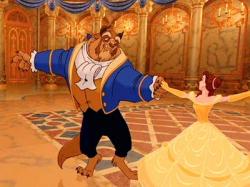 This is easily the best animated movie of all time.

Beauty And The Beast starts out in very familiar territory; a castle, some royalty and a curse. Definitely some Disney staples. However, it quickly shatters those tried and true formulas by being a more entertaining film than any Disney movie that came before it.

The movie is the story of Belle. A girl who lives with her single father and reads a lot. Much to the dismay of a large portion of the town she lives in. This is a direct lift from Barbra Streisand's Yentl character from the movie of the same name. Early in the film, Belle belts out a ballad while walking atop a hill in what is a direct nod to the opening sequence of The Sound Of Music. These similarities to other movies would normally be a point to complain about. However, Beauty And The Beast far surpasses both of those movies as entertainment.

So many movies have tried to appeal to a large audience. Almost all have failed. Here is a movie that actually has it all.

It is also a musical. There is the opening song that introduces the setting. There is the ballroom dance set to the Beauty and the Beast theme. But my favorite is the 'Be Our Guest' song performed by the enchanted castle residences set to Busby Berkeley style choreography.

The movie contains a large amount of drama, action and tension. Belle sacrificing herself to save her father. The Beast growling at everyone and saving Belle from the wolves. The climactic battle at the castle and the fight between Gaston and the Beast.

And as if all of that were not enough, Disney even throws in a moral. Not to judge a book by its cover. This movie even extends that moral beyond the cover. Not only should you not sell someone short due to there looks, you should also be patient with their sour attitude. You never know what kind of pressure someone else may be under.

As Scott has mentioned, this movie will long out last the other movies nominated that year for best picture. This is easily the best animated movie of all time. If only the Academy could have seen past the 'cartoon' and realized what a masterpiece this really is. 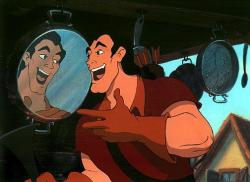 Gaston admires his reflection in Beauty and the Beast.

While certainly a classic and highly entertaining animated movie, I'm not as ready to bestow best all-time status on Beauty And The Beast as my brothers are. I will say that it definitely takes its place alongside Snow White, Bambi, Cinderella, Dumbo, Pinocchio, Sleeping Beauty, The Lady And The Tramp and The Little Mermaid (I don't count Fantasia because, as great as it is, it lacks a cohesive plot). jumping into the Academy Award debate, I don't think animated movies should compete alongside live action movies. Not that animation isn't worthy as an art form but simply because it is such a 'different' art form. And keep in mind that the Best Picture award does not necessarily go to the most 'entertaining' choice.

That said I wholeheartedly concur with everything else Scott and Eric have written about this enchanting musical. It is filled with lilting melodies, wonderful animation, charming and interesting characters, humorous sidekicks, excitement, magic, mystery, sacrifice and, above all, romantic love. These are the same key ingredients that Disney has employed ever since Snow White and the Seven Dwarfs premiered nearly seventy years ago. Truly a winning formula. After all, as the clock says in one of my favorite lines from the movie, "If it ain't Baroque don't fix it!"

The scene where Belle and The Beast waltz while Mrs. Potts sings those immortal lines and the 'camera' twirls around the beautiful, ornate ballroom is a quintessential moment in movies. Hell maybe my brothers are right.