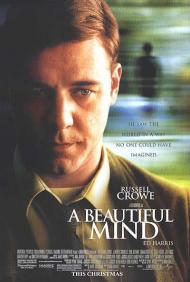 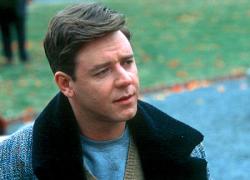 Russell Crowe as John Nash in A Beautiful Mind.

A Beautiful Mind tells the dramatic story of John Nash; mathematician, Nobel Prize winner and paranoid schizophrenic. Russell Crowe is very good in the starring role, being completely believable as the tormented genius. He imbues the character with dignity without playing the sympathy card too much. Ron Howard's direction is competent if rather slow during the first hour and ending with a typically schmaltzy finale. You know the scene we all knew was coming where the music swells and we are all supposed to have a tear in our eyes as the protagonist finally overcomes adversity to gain recognition.

The main thrust of the film deals with Nash's struggle with delusions and how it affects his life with his wife (the beautiful Jennifer Connolly) and son. The movie (which begins in 1947 when Nash is a student at Princeton and ends with his Nobel Prize win in 1994) takes far too long establishing his character. The scenes of him as a student should have been shortened by about twenty minutes. Things only get interesting well over an hour into the movie when he is finally forced to come face to face with his inner demons.

Still this is the role Crowe should win the Oscar for. John Nash is much more of a stretch than the character he played in the hugely over-rated Gladiator. Take the innocence (not to mention the time period) of Forrest Gump crossed with the math skills of the Rain Man, throw in the cynical delusions of the Ed Norton character in Fight Club and you have John Nash.

As for the critics, who have complained about the historical inaccuracies in this supposedly true story, I say who cares, has any film ever been completely honest in this sense? If you want that go rent a documentary. This is Entertainment baby. Although in the case of A Beautiful Mind it is only partly successful in that endeavor. To me a slow first hour can be made up for if the pay-off is big enough. If you don't mind predictable yet uplifting endings then go see this movie, otherwise wait for the video. 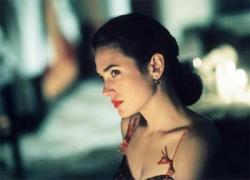 Jennifer Connelly in A Beautiful Mind.

Ok, here's an odd thing. I almost completely disagree with every thing in Patrick's review, and yet, I too am giving it 2 and 1/2 stars. He seems to have found the plot overly long, too predictable, and with not a big enough payoff. He also seems to have found Russell Crowe's performance, Oscar worthy. For me it was the exact opposite. I enjoyed the plot, thought the pacing working well, and found the ending to blessedly free of too much sentimental pap. I also thought that Russell Crowe, while a great actor in his own right, to be horribly miscast as the tortured genius, John Nash.

The plot of this movie centers around the concept that madness and genius are very nearly the same thing, or in the protagonist's case, completely inseparable. John Nash is clearly a man who lives so much in his mind, and is so focused on his one passion (mathematics), that he has no time for anything else. His mind therefore creates delusions that represent the other things that he can not be or have. He is a quiet, unpopular, tense student, so his mind creates the exact opposite of that. When his job seems meaningless and not as important as it should be, his mind creates an escape for that as well. And finally, when he seems to have lost it all, his mind again invents the deluded means of getting it all back. Only when he is forced to face what is real, does he begin to live outside his own mind.

The problem I have with Russell Crowe's performance is this, John Nash is an introverted, studious Mathematician. Russell Crowe is a brash, burly, and confident actor. Only occasionally do I feel that Crowe was able to bury himself completely in the role, and this is at the end of the movie, when Nash is older and Crowe is concealed behind makeup. Except for specific moments when displaying Nash's nervous twitch, Crowe seems to be swaggeringly arrogant. And this, for me, is enough to destroy the illusion.

The rest of the cast does remarkably well. Both Jennifer Connelly and Ed Harris are superb in their supporting roles, with Harris coming across as both sinister and menacing.

The sentimentality of the movie, as I said, is relatively low, particularly for a Ron Howard movie. I was very worried at the end of the movie when Nash stands up to make his Nobel Prize acceptance speech that he would launch into some dreadful monologue similar in tone to Jim Carrey's speech at the end of The Majestic, but instead it is kept short and sweet.

The first thought I had when leaving the theater after seeing this movie, was, 'That was really good, in a I don't care if I ever see it again, kind of way.' Enjoyable, with good acting, some heavy drama and a few light moments of comedy, but ultimately, not very re-watchable. 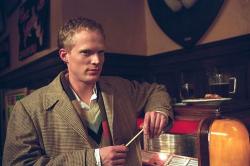 Paul Bettany in A Beautiful Mind.

John Nash, in A Beautiful Mind, is a mathematical genius. He sees codes and patterns where others see only numbers and words. He is delusional and extremely introverted. According to this movie, he is also the dullest person I have ever seen on film.

In real life John and Alicia divorced and then remarried. Some biographers of Nash have claimed he was homosexual or at least bisexual. None of these areas are shown or explored in this movie. Instead we are left with a man of few words. Some words are even inaudible. He thinks about math and just happens to marry a hot babe. That is all this movie says of his life. Okay he sees make believe people. So what? They are not real so they create no tension or drama. Perhaps if Ron Howard could have explored other aspects of Nash's life, such as his sexual preferences, we would have at least seen him as more than just a personality lacking boring schizophrenic.

I watched this movie with no compassion for anyone in it. Nash is nuts and no one but he can change that. Alicia in the movie should have left John like she did in real life. He almost drowned is own son due to his delusions. I related to some of the frustrations these characters dealt with, but never really liked any of them enough to truly give a damn.

The acting is unremarkable. Russell Crowe is adequate but not outstanding. Jennifer Connelly won the Oscar, but does little more than what Jacklyn Smith hasn't already done in about a dozen made for TV movies. That is to say, smile when she needs to look flirty and look sad when things are stressful.

Patrick was wrong. I would liked to have seen this movie portray the real John Nash. Scott was right. I never plan on ever seeing this dull film again.