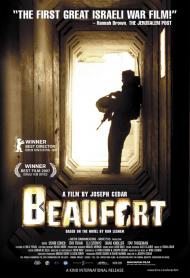 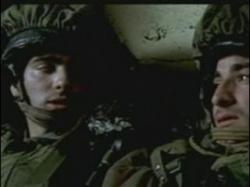 Beaufort is based on true events that were greatly covered in the Israeli media.  In 2000, Israeli troops pulled out of  an old Castle in Lebanon called Beaufort.  It was originally built during the Crusades.   In 1982, Israel captured it when they invaded Lebanon. and held it until the withdrawal. The planned departure encouraged Hezbollah to increase it's shelling, wanting to make the pull out look like a retreat, and thus a victory for them.

The movie opens with a bomb expert arriving to diffuse a bomb on the road just outside the fort, so they may pass safely when they leave.  He is played by Ohad Knoller, who seems to always play soldiers.  In real life he is in the Israeli army reserves.   Through him we are introduced to the men and their situation.

They all live underground in bunkers.  They are in a base built next to the old fort.  They visit it in one scene.  Hezbollah shells them often.  They get  a few seconds of warning over a loudspeaker that announces "Incoming, Incoming."

The enemy is never shown, but their shelling wreaks havoc.  The men are very isolated.  A truck or helicopter occasionally arrives with supplies.  The Israeli soldiers are all stressed and angry.  They are never sure why they originally took and kept the fort.  As the casualties mount the tension and fear rises.

The leader, Liraz, is a baby faced twenty something.  He gives orders with confidence and genuinely cares for his men.  He is however, human.  At one point he finds himself frozen with fear when another soldier needs him.

Although this is a war movie, there is very little action.  At over two hours there is more dialogue than gun fire.   This is a study on young men thrown into high stress, dangerous situations.  No doubt this was quite an emotional moment for many Israelis when it happened.  Soldiers returning home is always a bittersweet moment.  Some came home, while others did not.

With little action and an often dreadfully slow pace, it is up to the drama of the story to emotionally engage the audience.  Although it does not fail completely, I never felt connected to these men.  So many scenes could heave been better milked dramatically.  Even the end was somewhat of a let down.  The convoy just drives back over the border and the men sigh and call their mothers.    Even if it is not realistic, sometimes you have to dramatize the story to get the audience to empathize with the characters.  As this movie was filmed, I felt like a cold observer only occasionally being emotionally pulled in.