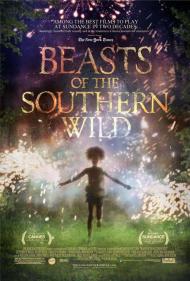 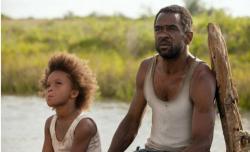 Quvenzhane Wallis and Dwight Henry in Beasts of the Southern Wild.

Beasts of the Southern Wild is the first feature film from writer/director Benh Zeitlin. It was based on the one act play Juicy and Delicious by Lucy Alibar. It premiered at this year's Sundance Film Festival where it won the Grand Jury Prize: Dramatic. In May it received the prestigious Caméra d'Or at Cannes. This whimsical fable mixes dramatic elements with the fantastic in one vividly chiseled and emotionally devastating motion picture.

Set in New Orleans' southern Delta in an area known by its inhabitants as “The Bathtub”, Beasts of the Southern Wild tells the story of six-year-old Hushpuppy and her father Wink. They live in squalor in separate, but equally dilapidated, trailers; her house and his. Hushpuppy bravely faces her motherless life in these primitive surroundings, a place that seems strangely out of touch with the outside world. With the coming of a hurricane (think Katrina) their lives are turned upside down as they bravely choose to stay and battle the elements for their home and way of life.

The relationship between Wink and Hushpuppy is complex. He uses tough love to prepare his daughter for a world without him in it to protect her. Their interactions are at times difficult to watch and ultimately heartbreaking. This movie will bring tears to the eyes of anyone with a beating heart.

One refreshing element to the movie is the fact that race is a non issue. Wink and Hushpuppy are black but they have a close-knit extended familial relationship with their neighbors, some of whom are white.  As a group they face the struggles and challenges brought on by the storm and subsequent flooding of their homes. These are not your typical middle-class Americans. Not by a long shot. In fact, the movie almost seems to take place in a third world country.

One of the best scenes is when outside authorities force these last remaining inhabitants of The Bathtub into an emergency shelter. This scene contains a brilliant blend of humor and pathos. The situation is anything but funny yet the way it is filmed manages to provide a few chuckles.

The entire cast is quite effective but the star of the movie is the very young Quvenzhané Wallis who plays Hushpuppy. She proves herself a natural talent in her very first movie role. In short, she is a star! Oscar talk has already begun for the now nine-year-old actresses tour de force performance. She will make you fall in love and then break your heart as the intrepid Hushpuppy. She looks the world squarely in the eye and handles catastrophe and tragedy with the wisdom of an elder.

She utters little philosophical nuggets like, “Everybody loses the thing that made them. The brave men stay and watch it happen. They don't run.” and “The whole universe depends on everything fitting together just right. If one piece busts, even the smallest piece... the whole universe will get busted.” Dialogue that would sound a bit too precious coming from the mouths of most child actors seem like the natural thoughts of a child coming from her.

And then there is the fantasy element to the story... I don't want to give too much away but I will say the eponymous creatures do show up before the end. Hushpuppy has a child's imagination and the movie never strays from her perspective. Beasts of the Southern Wild is a beautifully wrought cinematic poem that tells an original childhood fable. Don't miss it.

Quvenzhane Wallis in Beasts of the Southern Wild.

I was much less impressed with this movie than Patrick was, and based on the near universal praise heaped upon it and the Best Picture Oscar nomination, I was less impressed with it than most. I wasn't bored, but it's not quite the work of art it's been labeled.

Patrick's right. The inhabitants of the Bathtub do seem like third worldsters. Although where Patrick put it, “they bravely choose to stay and battle the elements”, I say they were stupid enough to stay when the storm struck and arrogant enough to think they could survive it. Wink doesn't just use “tough love” to prepare his daughter. He uses borderline insanity and neglect to raise her.

Quevenzhane Wallis's performance has been earning rave reviews as well, but honestly I don't see it. And no way should a six year old ever be nominated for an Academy Award. If I were Jessica Chastain, Jennifer Lawrence, Emmanuelle Riva, or Naomi Watts, I would actually be insulted having her included in the same category with them. Could she even read the script, or was she simply parroting the dialogue fed to her off camera? She's cute enough and definitely precocious, but a Best Actress nominee? No. And if I ever expected to be thumbed down for something I wrote, this paragraph is definitely it.

Wallis's performance is also hampered by some incredibly purple prose. Patrick mentioned some of the worst lines. Although he didn't quote them as examples of bad dialogue, I found them to be annoyingly pretentious. Here's some others, “When it all goes quiet behind my eyes, I see everything that made me flying around in invisible pieces.” “I see that I am a little piece of a big, big universe, and that makes it right.” If she'd been narrating from an adult perspective, looking back at her childhood, I could maybe forgive it, but what six year old would even understand such dialogue, let alone be able to put together the language?

I did enjoy the symbolism of the Aurochs. I suppose they could be interpreted in many ways, but to me they represented death and change. At first Hushpuppy thinks of them as monsters coming to devour her in the same way that she eats animals; a theme for much of the first half of the movie. By the end though, she no longer fears them, knowing that they, just like change in her young life, are inevitable. She is able to face them and her fear, accepting the death of her father and knowing that her way of life will soon be extinct just like the Aurochs.

One thing that truly does make this movie stand out over the other Best Picture nominees is that it's the only one that runs less than 2 hours. You could almost watch it twice during the running time of one screening of Zero Dark Thirty. It's a nice enough little fable, just not worthy of all the plaudits. 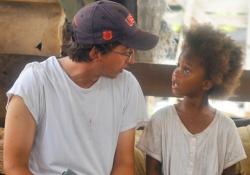 Ben-Zeitlin directing Quvenzhane Wallis in Beasts of the Southern Wild

Since my brothers did not mention the politics, I will start there. Early on we have Wink and Hushpuppy staring at a huge factory with billowing smoke stacks. A little bit later Hushpuppy thinks of a chunk of ice breaking away from an ice shelf, then comes the flood. Whatever is this film trying to say?

Nothing about this film seemed real to me. The people were more like stereotypical caricatures than sincere humans in such a place. Scott mentioned how the lines of dialogue were nothing like what a five year old would ever say. Patrick fawned over the lack of race as an issue. That sounds nice, but race is so avoided as to seem unrealistic. After Katrina hit, all we heard was how Bush was a racist for causing the storm to just hit the black neighborhoods.

This film is more like how a 29 year old, white, New York liberal, college educated, Jew might picture this area, than how it really is. Director Zeitlin is all of those things. Just as in Winter's Bone (2010), in which an east coast, college graduate directed a movie about hillbillies, these directors are outsiders trying to depict a world they have only heard about. Their lives have absolutely nothing in common with the characters in the story they are directing.  Sure, you could argue that many directors have filmed stories in all kinds of places they have never lived, but this film and Winter's Bone are films that hinge nearly entirely on the flavor of the location and the people who live there.

As for Quvenzhane Wallis's acting, she does what is required. She makes faces when she needs to. Look at her make her "mad" face when her daddy tells her he is dying. Children are, for the most part, natural actors. We played cowboys and Indians. We dressed as superheroes. We play wrestled, putting on a persona. I was not impressed with Quvenzhane Wallis. She is a cute kid but her acting is not so great as to deserve the praise it is getting. Notice how the camera never stays on her long before a cut. Each scene requires one emotion and she delivers it but acting is so much more than one emotion at a time.

My brothers mentioned the dialogue and I will add one line. Hushpuppy and some other kids swim out to some passing boat where the captain takes them onboard and offers Hushpuppy some worthless philosophy about his wrappers on the floor. He tells Hushpuppy, "This boat will take you exactly where you want to go." Too bad it could not take me where I wanted to go, the end of this film!